That women are hugely under-represented in the training ranks is surely now recognised by everyone as irrefutable fact. While the debate still simmers about whether female jockeys are as capable as males, no-one can seriously contend that women generally are less well equipped than men to train racehorses. Debate over. No case to answer.

And the point got doubly underlined last week when two of the golden moments at Royal Ascot were provided by female trainers.

Highlight number one came in race number one at the festival, the one-mile G1 Queen Anne Stakes, in which 33/1 outsider Accidental Agent, trained by Eve Johnson Houghton near Lambourn in Southern England, beat a top-class field of runners trained by the likes of Aidan O’Brien, Saeed Bin Suroor, Richard Hannon, Bill Mott and Carlos Laffon-Parias.

The golden moment wasn’t so much that the homebred son of Delegator caused such an upset as the infectious reaction to it of the popular Johnson Houghton, whose father Fulke trained ten Royal Ascot winners in a career that spanned the years from 1961 to 2006 and included top-level wins by horses such as the Irish Derby and St Leger winning brothers Ribocco and Ribero, Habitat and Ile De Bourbon.

“Unbelievable! I still can’t believe it. I haven't slept for two nights. I dreamt that he would be third. My mum bred Accidental Agent - we have got the mare in the field - but nobody wanted to buy him and we bought him back for eight grand,” said Eve Johnson Houghton, who took over the stable when her father retired.

“I thought I was tilting at windmills. I dreamt about finishing third and then watching it I said, ‘oh my god, we are going to place.’

“The poor people sitting in front of me and my Mum - I apologise to them - they will definitely be deaf because there was an awful lot of screaming going on. It is just ridiculous, absolutely ridiculous. You might need to man the lifeboats as there are a lot of tears! Group 1 winner ... I’ve never trained a Royal Ascot winner, let alone a Group 1 winner at Royal Ascot!

The victory meant lots of points for Johnson Houghton in the TRC Global Rankings, and she now enters the top 500 for the first time at #381 - which, more significantly, makes her the joint 17th highest-ranked female in the trainers’ standings (and the joint highest British female, alongside Ruth Carr).

After the daughter of Mastercraftsman’s last victory - in the Irish 1000 Guineas last month - Harrington charged 39 places up the trainers’ rankings to #131, which made her the world’s third highest-ranked female trainer, and the Royal Ascot triumph helped lift her up another 27 slots to #103. 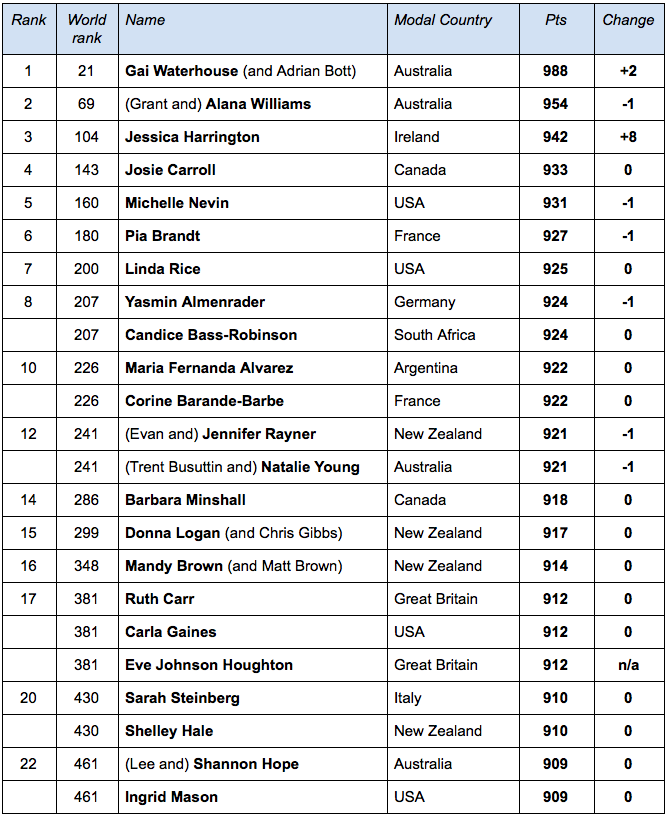 Between them they were responsible for 14 of the 21 Royal Ascot runners trained by women. Amy Murphy (2), Gina Rarick, Gaye Kelleway, Amanda Perrett, Karen McLintock (whose sole runner was second in the Ascot Stakes handicap) and Jayne Chapple-Hyam (her only runner was third in the Royal Hunt Cup handicap at 100/1) were also represented.

Against this, though, the other 481 runners at the meeting were trained by men.