With three months of a year that will never be forgotten in the books – and with more time on our hands than is normally the case – we can afford a leisurely look at how results around the globe have affected the leading protagonists in our rankings.

Over the next four weeks, we will look at Jockeys, Owners, Trainers and Sires successively, listing the competitors merely by aggregate wins for convenience, and detailing and explaining the changes to the Performance Rating which drive their overall rankings.

Let’s take a look at the first category of Jockeys before explaining how the predictive nature of TRC Global Rankings sees competitors move up and down the standings.

Group/Graded wins in the first quarter of the year 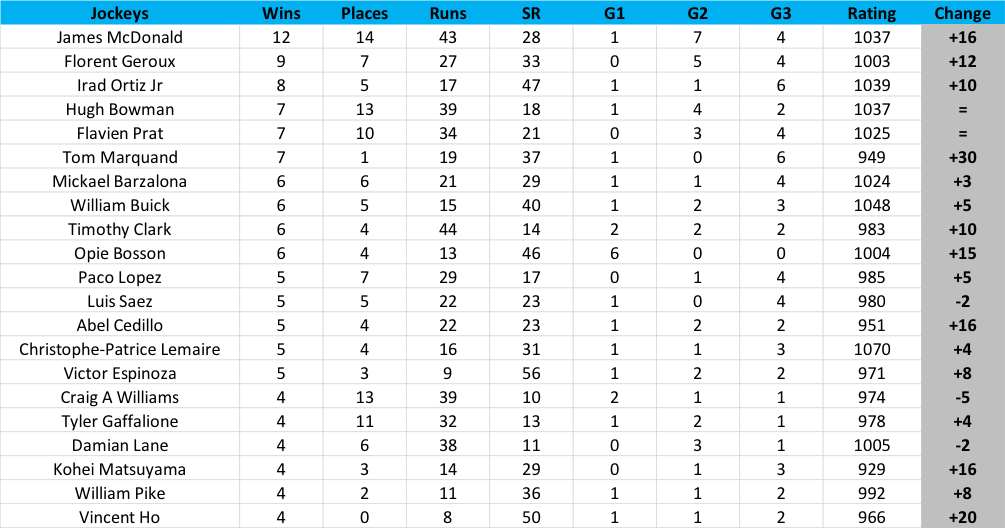 In the table, we have included all jockeys with four or more wins this year. The Change to TRC Performance Ratings in the rightmost column is naturally some function of these statistics, but one of the strengths of our system is that we try to place every competitor in a context-neutral situation.

Every time a Group or Graded race is run, the TRC computer calculates an expected order of finish based on optimised combination of ranking points in each category (we identify roughly 25 percent of all winners by this method). Then, after the race is run, we compare the order of finish with our predicted result and systematically try to ‘learn’ from the result, shifting the ratings of each Jockey upwards or downwards a little according to where their horse finished compared with expectation. Rankings of competitors down the field are affected less than those who have featured in the finish.

Now, it isn’t quite as simple as that because there are various other situations to account for in order to preserve the best possible ranking for future races. One of these is that of an owner, trainer or sire having multiple representatives in a race, when we don’t penalise beaten runners so much as in other circumstances.

Take trainer Aidan O’Brien’s portfolio approach to winning races, particularly in his home territory of Ireland. Winning the race with one runner is the ultimate objective, so we are not that interested in whether his third or fourth string doesn’t make the money.

We also try to overlay an ‘ageing curve’-like effect in each of the four categories. This is not easy to explain, but in a nutshell the objective is to learn from the movement of previous competitors up and down the ranking the degree to which performance tends to improve or decline. A jockey bursting onto the scene like the British rider Tom Marquand is currently doing in Australia is likely to move up the figures more sharply than an owner with the same results because there is a momentum effect obvious in previous instances that comes from riders in hot form getting increased opportunities.

This predictive nature of TRC Global Rankings results in the ratings having an implicit expectation in terms of performance.

Look now at the table. Australian Hugh Bowman and U.S.-based Frenchman Flavien Prat have both had a successful spell so far in 2020, with seven winners. However, both are on the same rating this week as they were when the year began? Why? Well, hopefully you can anticipate the reason: their performance is bang-on what we would have expected, given their status and the races in which they have competed.

Not so James McDonald. The outstanding Australian-based Kiwi rider has had 12 winners in Group races so far this year, at a 28 percent strike rate. This is quite a bit better than our rankings expected across the set of races in which he has competed, so gradually the algorithm has learned that he is returning to his previous best (world #5 in 2016) and moved him up the figures, so that the ‘error’ we made in forecasting those races is retrospectively diminished.

You will be able to apply the same logic to understand all the movements of the jockeys in our rankings each and every week. So, winning is no guarantee of going up the charts and losing does not necessarily lead to a decline.

Look at Craig Williams, for example. He has had four winners and 13 placed horses from 39 rides in Group races down under this year, which isn’t bad at all. But, he hasn’t done as well as we expected, raising only a ten percent strike rate, so he has actually been dropped 5pts.

Research goes on as to how to optimise our rankings. We have seen a rise in our percentage of expected winners, so something is working, but there is still great opportunity to do better still, such as to understand the combination of competitors with the same horse, for example.

Next week, it is the turn of the Owners which has been our least successful category owing to the difficulty of attributing the success and failure of horses owned by syndicates and partnerships proportionately to their true impact. More of that as this series continues.