The graph below says it all. James McDonald is right back at the lofty heights he reached four years ago. The 28-year-old has had a spectacular season, is on top of the world so far in 2020, and has been dominating the cut-throat Sydney racing scene to such an extent that he has usurped former world #1 Hugh Bowman as the highest-ranked rider in the Southern Hemisphere.

The New Zealander’s four Group winners at Rosehill last Saturday elevated him to world #7 - just two places (and ten TRC Performance Index points) behind his peak ranking, which he achieved in October 2016 before the suspension that at one time looked as though it could end his career. 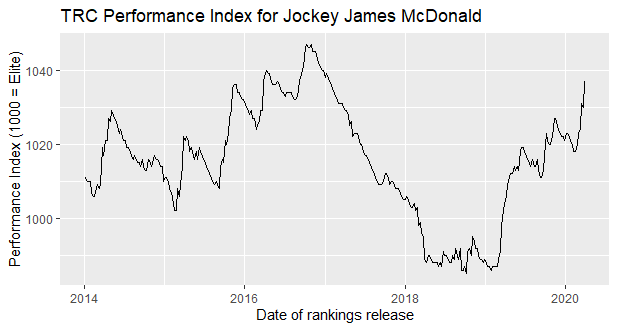 * Ranked every week of rankings history since first week of 2014

McDonald heads into day one of The Championships, the pinnacle of the Sydney Autumn Carnival, at Randwick tomorrow (Saturday) with 81½ wins to his credit in Australia this season, leading the Sydney jockeys’ premiership with 68½ wins as he heads towards a fourth Sydney title, remarkable given the calibre of his opposition.

His mounts in Australia have amassed more than AU$14 million in prize money this season, while the kid from Cambridge, New Zealand, also gave Kiwi racing fans a first-hand reminder of his supreme talent when he dominated Ellerslie’s Christmas/New Year carnival.

Seven winners and seven placegetters from 16 rides was not a bad effort from a couple of forays to his homeland, which included January’s Karaka Million meeting, with his mounts earning in excess of $800,000.

Soon to be the youngest person to be inducted to the New Zealand Racing Hall of Fame (the ceremony, originally slated for May, is currently on hold), McDonald was last weekend racking up a Saturday metropolitan four-timer for the second time in March, while the impressive Tancred Stakes win on Verry Elleegant (see video below) was the 45th G1 of his career.

The former Kiwi galloper has stamped herself as one of the stars of Australian racing and McDonald sees no reason why spring majors such as the G1 Caulfield Cup and G1 Melbourne Cup could not be within her grasp.

“If she held her form from the way she is going now until the spring, she would be extremely competitive in Caulfield and Melbourne Cups,” McDonald said. “I think she is a mare that is only going to get better as she gets on. She is only four and she is New Zealand-bred and only maturing now.

“Whatever she has done previously is actually a bonus. She is a late bloomer but she is absolutely airborne and those sort of races are not out of reach and any rain on the day enhances her chances.”

While Verry Elleegant was the star of the day, McDonald also notched victories aboard Night’s Watch, Cascadian and Quick Thinker.

McDonald said it was an odd feeling returning to the winner’s circle in front of empty grandstands as racing continues behind closed doors. “You have to enjoy yourself a little bit, but it is a very eerie feeling and obviously, with every sport that people play, we enjoy the crowd being there. It does give you a bit of a lift, but at the moment with the crowds not there, you have to make your own fun.

“When you get to ride those good horses, the adrenaline kicks in.”

The racing industry right around Australia is going to extreme measures to enable it to continue under Covid-19 restrictions and McDonald said he and his fellow riders were doing their bit.

“Everyone in the community is in the same boat, but as a jockey, we are just travelling to Wednesday and Saturday race meetings and only doing trackwork on a Tuesday,” he said. “For the rest of the week, we are locked inside and none of us want to get sick so we’re taking every precaution possible to keep racing going and we’re very grateful it is going. Obviously there have been a few sacrifices but we’re willing to make them.”

At The Championships tomorrow, McDonald has a number of plum rides to look forward to. Among them are enigmatic sprinter Nature Strip in the G1 TJ Smith Stakes (1200m) and high-class 3-year-old Castelvecchio, who will be out to emulate his sire Dundeel, whom McDonald rode to victory in the G1 Australian Derby (2400m) seven years ago.

“Nature Strip is going really well,” McDonald said. “Obviously he is a quirky horse with a mind of his own but, when he does put his best foot forward, he looks sensational and he feels great. At home, he can’t be going any better and he trialled super the other day.

“I’m looking forward to riding Castelvecchio. He looks like he will relish the trip and he is a pretty exciting horse. Hopefully he can do the job in the Derby.”

McDonald’s other rides this weekend, include outsider Mister Sea Wolf in the G1 Doncaster Mile, progressive colt Bartley in the G1 Sires’ (1400m), Godolphin’s Oaks filly Colette in the G3 Adrian Knox (2000m) and the Murray Baker and Andrew Forsman-trained The Chosen One in the G2 Chairman’s Quality (2600m).

An ‘absolute rocket’ from Japan

He has also landed the ride on raider Danon Premium in the the biggest race of The Championships, the G1 Queen Elizabeth Stakes (2000m), on Saturday week as the Japanese bid to extend their exceptional recent run in some of the world’s most prestigious races.

One of the best gallopers at a mile to 2000m in Japan, the G1 winner is likely to clash with a field that includes New Zealand stars Te Akau Shark and Melody Belle, English challenger Addeybb, emerging star Master Of Wine and potentially Verry Elleegant, a last-minute addition to the line-up.

“From all reports, Danon Premium sounds like an absolute rocket, so I am looking forward to sitting on him in trackwork,” McDonald said. “His form lines are second to none in Japan, so if he brings that sort of form down here, he should be hard to beat in a very competitive Queen Elizabeth.”

While grappling with his restricted life in Sydney at present, McDonald also has thoughts for his family and friends in New Zealand, who are under level 4 alert lockdown.

“Mum and Dad are doing it a bit tougher and are a bit bored and they feel like they’re a bit isolated away from my brother, Luke, and I, who are both in Australia,” he said. “But I suppose we will just get through it and see a bit of light at the end of the tunnel.”