He’s been one of the world’s finest jockeys for more than 20 years, the go-to rider the top trainers turn to when they have a big horse in with a big chance in a big event and their usual jockey is unavailable. They know they can trust Olivier Peslier. They know he’ll get the best out of their charge.

The Frenchman has won more than 100 G1s worldwide, including most of the greatest ones - the Arc (four times), the Epsom Derby, the Irish Derby, the Prix du Jockey Club (twice), the King George, the Arima Kinen (three times), the Japan Cup (twice), seven Hong Kong International Races and five Breeders’ Cup events, chief among them the three consecutive Breeders’ Cup Miles he won aboard Goldikova (2008-10).

He has ridden big-race winners for Andre Fabre, Freddy Head, Sir Michael Stoute, Luca Cumani, Aidan O’Brien and many, many others at the top of the profession.

But it’s been a quieter time of late for the now 44-year-old, although that is largely by choice. He still gets those big-race calls from yards anxious to find the best available, but Peslier has adopted a slightly lower profile these days and he is riding less.

Not that you’d know it, however, if you took a look at the TRC Global Rankings this week, specifically at the Climbers page. There, right at the top of the list of all the jockeys, trainers, owners and sires that have made the biggest week-on-week gains in rankings points worldwide, sits Olivier Peslier.

His 11-point gain comes largely because of three Group wins in France last week - an impressive victory at Saint-Cloud last Monday on G2 winner Recoletos (now among the favourites for the Prix du Jockey Club in just over two weeks), a G3 win there on the same day on Tiberian, and Precieuse’s success in the G1 Poule d’Essai des Pouliches at Deauville on Saturday. Three wins, three different trainers. 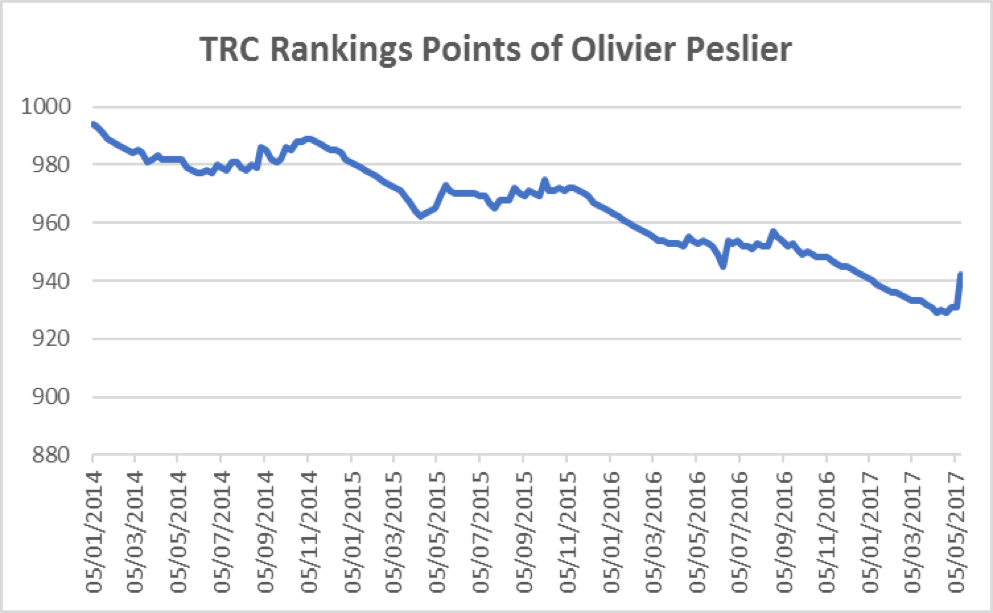 As the graph here shows, this week represents what is probably little more than a momentary uplift in Peslier’s world rankings trajectory. It moves him up 16 places to #62. He has been much higher in the life of the TRC algorithm. He would have been even higher had it existed a decade or more ago.

Peslier was one of two individuals to grab three Group or Graded victories last week, the other being none other than Ryan Moore, whose six-point gain on the week has taken him eight points clear of Hugh Bowman at the top of the jockeys’ standings.

Moore won a G2 and a G3 at Chester (both for Aidan O’Brien) and a G3 at Newbury for trainer Chris Wall.