Two fabulous racehorses cast a lengthy and impressive shadow over last week’s international action, with their connections reaping the benefits in the updated edition of the TRC Global Rankings. One, of course, was superstar mare Winx. The other was the stunning Shadwell sprinter Ertijaal.

Winx’s smooth comeback win in the G2 Apollo Stakes at Randwick last Monday, at 125, was the world’s highest-rated performance on Racing Post Ratings (RPR) during the seven-day period up to Sunday. It should have put her spot on for Saturday’s G1 Chipping Norton Stakes back at Randwick, her first major target of 2017, although how fully tuned up she needs to be is a moot point - the opposition, headed by old rival Hartnell, is pretty much the same as last Monday. Winx is no better than a 1-8 chance to take her unbeaten run to 15.

The Apollo certainly did the standing of her sire, the late Street Cry, no harm in the world rankings, lifting him to joint 15th thanks to a one-point week-on-week gain. There were also positive scores for her owners, Magic Bloodstock (up four points, still #11 in the standings), and rider Hugh Bowman, whose three-point gain means he is now out on his own as #2 in the world jockeys’ rankings, although still significantly behind leader Ryan Moore, who gained a point himself after a G3 win in Japan on Saturday.

Winx’s victory wasn’t enough to improve trainer Chris Waller’s overall points total, and he remains at world #5. Indeed, he lost a little more ground to Aussie rival Darren Weir (#4), who made a two-point gain on the week.

Expect plenty of Aussie movement on Saturday with two cards full of top-class action. Weir has a battalion of runners at the big meeting at Caulfield in Melbourne, which features three G1s, three G2s and two G3s. His standout is Black Heart Bart, already a Caulfield G1 winner this month, who is hot favourite for the G1 italktravel Futurity Stakes over a mile.

Naturally, Sydney-based Waller will be at Randwick, which has one G1 (the Chipping Norton), three G2s and two G3s. He has fewer chances there than Weir does further south, but one of them, of course, is Winx.

Second highest rated performance on RPR last week was registered when Ertijaal clobbered a decent field in the G3 Meydan Sprint on Thursday. He was allotted a mark of 123, which was higher than the 120 given to Terravista for winning the G1 Black Caviar Lightning Stakes over the same trip at Flemington two days later.

Next up for Hamdan Al Maktoum’s 6-year-old gelding is the G1 Al Quoz Sprint on Dubai World Cup night.

Ertijaal (not to be confused with the Mike de Kock-trained horse of the same name, who has also run in Dubai this year) found only star Aussie sprinter Buffering too good in the 2016 Al Quoz, but he looks at least as fast this term. The race will be over six furlongs (up from five) this time, but Ertijaal didn’t seem to be stopping last Thursday (check out the YouTube video above). 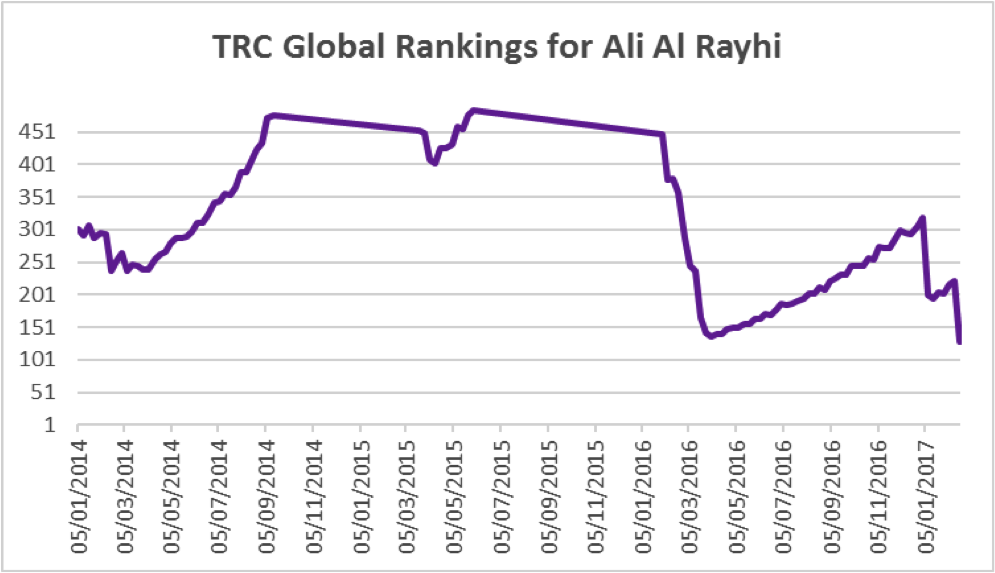 His victory helped his trainer, Ali Al Rayhi, to the biggest week-on-week gain of the latest edition of TRC Global Rankings. The extra 14 points lift him no less than 95 places to 128 in the trainers’ standings. As the graph here shows, Al Rayhi is already back to the same sort of ranking he had achieved by the end of the Dubai Carnival last year.

And it was more good news for Sheikh Hamdan’s recently appointed stable jockey, the British champion Jim Crowley, who gained seven points to continue his climb up the world rankings. He is now #91.

It also meant a 19-place rise for Ertijaal’s sire, Juddmonte’s Oasis Dream, who gained four points and is now #83. 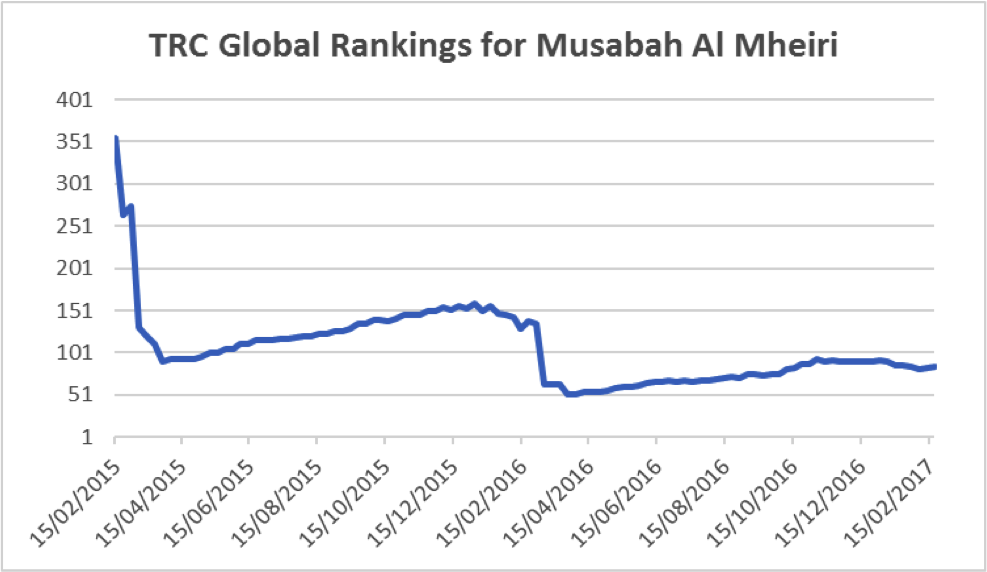 While Ali Al Rayhi has cause to rejoice, it’s a different story for his brother-in-law, Musabah Al Mheiri, who is the highest-ranked UAE-based trainer. He may not be for much longer, however, as he has just been banned for 12 months after one of his runners in January tested positive for excess cobalt. He pleaded guilty, which the Emirates Racing Authority said was taken into account. Al Mheiri’s rankings trajectory (see graph) is likely to change direction quite markedly very soon.