Bloodstock is prone to ever-changing fashions, but also to fluctuating results. A stallion can have a poor year in terms of hitting the headlines through nothing more than randomness, but his career arc may be permanently damaged. Alternatively, a cluster of winners can create a bubble at sales time that drives further success.

The TRC Global Rankings algorithm attempts to see the true signal of quality through both sources of noise. Every runner a sire is responsible for drives the projection of his success rate, which is what our rankings points represent.

The accompanying table contains the record of the latest iteration of the TRC Global Rankings top 30 sires. 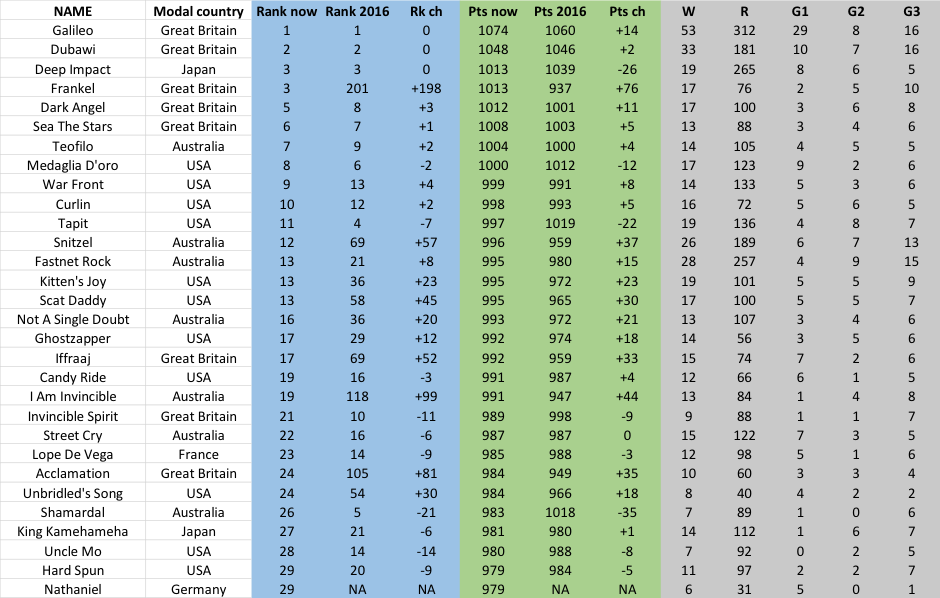 You can see those rankings in the leftmost column of the blue area. In the column to that one’s right is the equivalent ranking after the Arc weekend in 2016 which is directly comparable.

Now switch focus the green area. This is the rankings points for last year and this, with the gain or loss in the rightmost column. While in the grey region is the aggregate statistics for the last 52 weeks.

Because we have sliced off the top 30, there are more ‘+’s in the change columns than ‘-‘s. This is because the rankings rate recent achievement most heavily, so those stallions doing well in the past year tend to be more heavily featured at the top. Be assured that the median change in points of the top 300 stallions is zero – the scale of points is centred exactly where it was 12 months ago and changes reflect real-life differences in results and their implications.

You can pick out stallions you are interested in from the data. One certainly worth a mention is Kitten’s Joy, who has steadily bolstered his numbers and stands at a career-high #13 this week with a personal-best total of 972 points. As we featured when analysing the records of U.S. stallions on different surfaces, Kitten’s Joy has been an outstanding sire on the grass for a while now, and his influence in Europe may develop after his son Roaring Lion won the G2 Royal Lodge Stakes at Newmarket on Saturday.

Owner Ken Ramsey has said he is unhappy with the prices achieved by some of his stallion’s progeny at the Keeneland September Sale. He was even reported to be considering moving the Ramsey Farm-based producer over to Europe, given the dominance of dirt racing in the U.S., although that idea is now thought to have been dropped. Whatever the outcome, Roaring Lion’s victory underlines the potential of Kitten’s Joy in the European market.

Notice from the table that seven of the top eight sires now were in the top ten in this week last year. Apart from what this says about the rankings algorithm, it indicates that getting your hands on the progeny of Galileo, Dubawi, Deep Impact, Dark Angel, Sea The Stars, Teofilo and Medaglia d’Oro takes you a long way down the road to success, whether you are an owner, trainer or jockey.

Five of these seven are primarily associated with European racing. There has been more volatility in the rankings of sires with modal country ‘USA’ in the last 12 months, and that has led to a collective retreat from those slots just beneath the Big Three of Galileo, Dubawi and Deep Impact, which we believe is actually a Big Four when you include Frankel.

The next 12 months will be fascinating.