TRC Global Rankings are sufficiently robust to be able to work on a subset of the main data we use to produce the rankings each week. Here, we have used data from U.S. racing only during the same ranking period as the main classifications (October 9, 2013 – October 9, 2016). The intention is to investigate the relationship between a sire’s potency on dirt and turf. 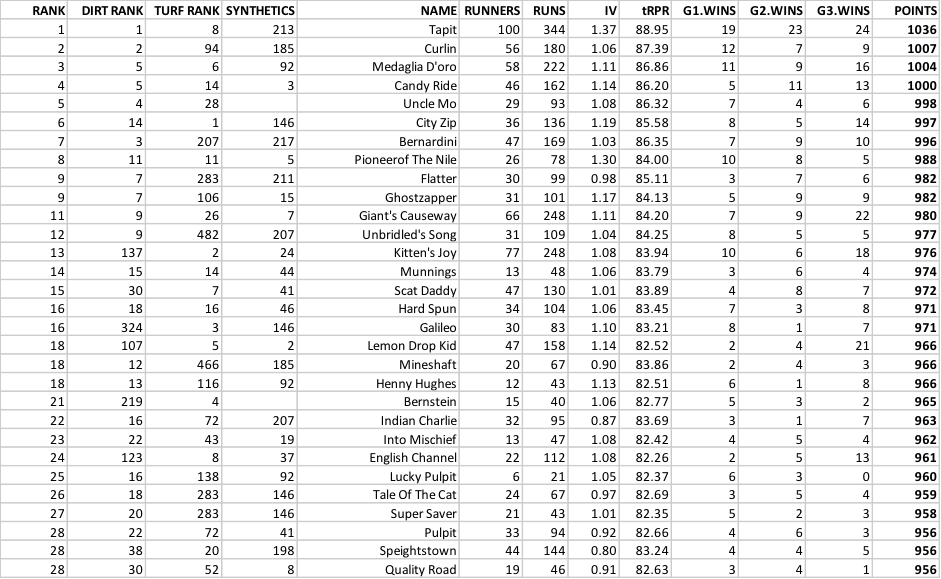 The leading sires are ranked using the same methodology as the main TRC Global Rankings algorithm. Points scores are different from the overall TRC Global Rankings table because many of these elite sires have representatives elsewhere in the world. Here we are just showing their runners in America.

The motivation is still the same: points and rank represent an index of the likelihood that a runner by each sire in the list will defeat another sire’s progeny in a Graded race during the next week. Note that Tapit’s stock has run only 46 times at Group level outside the U.S.

The data in the table above uses the results of races on dirt, turf, Polytrack, Tapeta and Cushion track. The column ‘SYNTHETICS’ summarises racing on the last three surfaces combined.

Note that a space in any of the ranks columns indicates that the sire did not qualify for a top 500 placing in the main rankings. 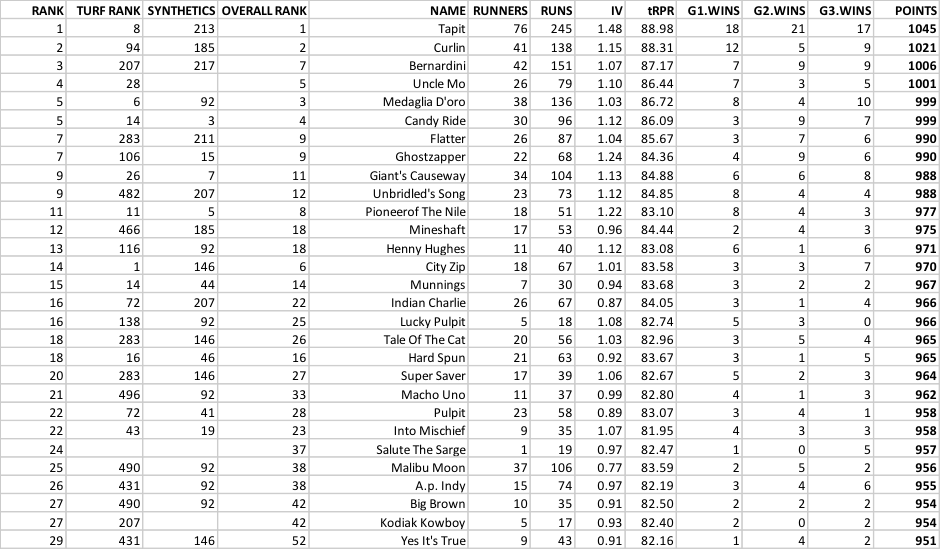 As the majority of top-class racing in the U.S. takes place on dirt, there is a strong correlation – especially among sires in the top 10 – between their Dirt Rank (the column marked just ‘RANK’ here) and their overall rank. 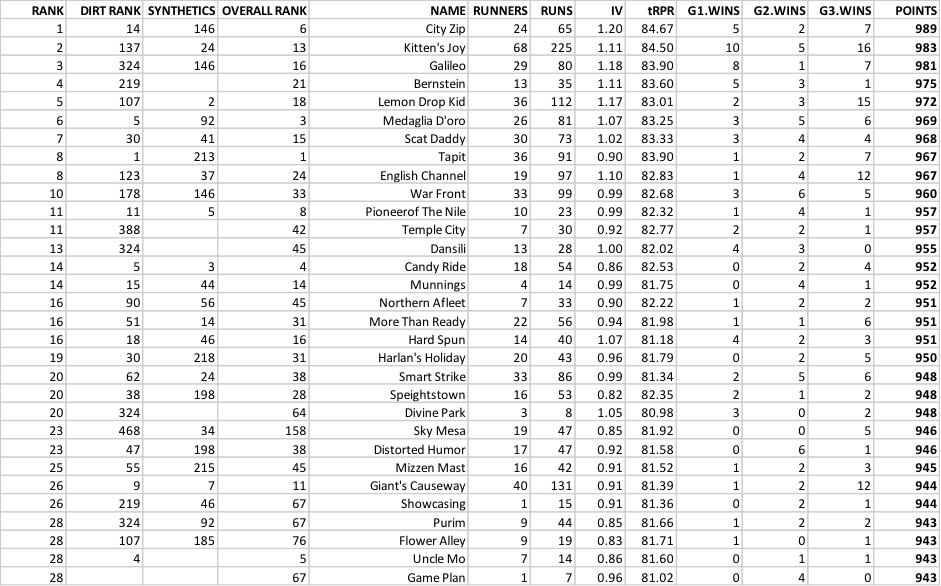 The sample sizes are getting quite small here because there is less Graded racing on turf in the U.S. compared to dirt (in the three-year ranking period, our database includes 750 Graded races on dirt, 518 on turf, 44 on Polytrack, 12 on Tapeta and six on Cushion track). Nevertheless, the TRC Global Rankings algorithm can easily cope. Lower points scores are the result of smaller samples meaning greater uncertainty – one of our mantras.

A glance at the table reveals which sires are versatile and which are not. Does this data suggest that more sons and daughters of Tapit should be racing in Europe? By contrast, Galileo’s contrasting rankings across surfaces indicate that his stock have a strong preference for turf. 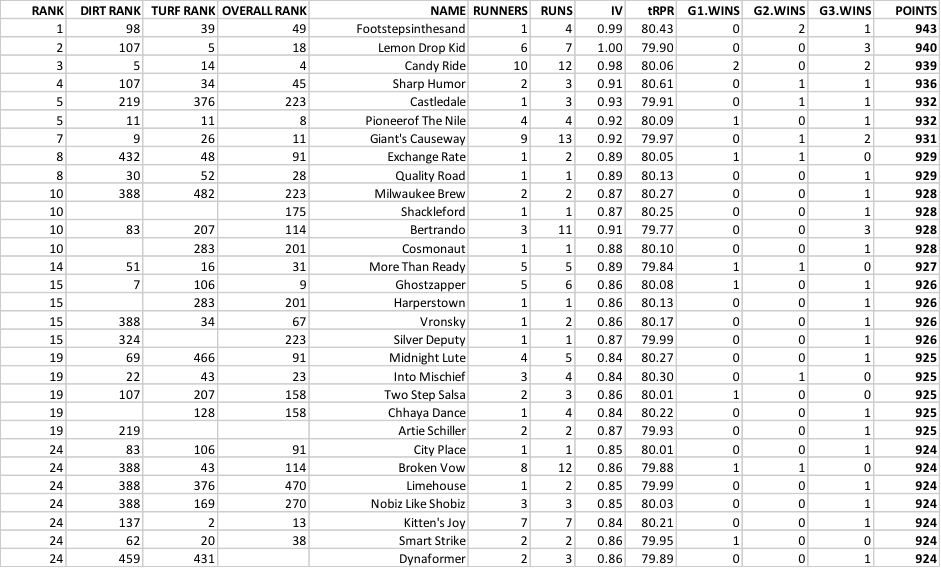 It’s a good job we don’t have to make projections on this data alone because it is barely sufficient to cast the TRC Global Rankings. Nevertheless, it is included here for completeness and interest. Unfortunately, the sample sizes are just not great enough to determine whether the stallions who do well on synthetics have more in common with those who excel on dirt or those who excel on turf.

Dirt v Turf: is there any correlation between a sire’s potency on both surfaces?

Many of the sires highly ranked on dirt - like Bernardini and Unbridled's Song - are ranked a lot lower on turf. And the reverse is true for some of the leading turf sires like Kitten's Joy and Galileo.

In fact, if you take only the top 30 sires in the All surfaces table, the surprising result from a statistical point of view is that Dirt Rank and Turf Rank are negatively correlated. This means that higher-ranked sires on dirt tend to be lower ranked on turf, and vice versa, and this tendency holds across the entire data set. (Yes, there are sires with a high or low rank in both tables, but they are outnumbered by others who conform to the ‘rule’.)

At first blush, this might seem a highly interesting insight into the Thoroughbred pedigree. Horsemen and other racing analysts point to good horses on dirt and turf respectively as having different actions, different run-style and different qualities. So, as TRC Global Rankings suggest, are they a different breed?

We cannot help believing that the tendency for sires to be polarised to one surface or another (we haven’t mentioned synthetics here because there isn't enough data) is at least some function of their careers being shaped by the prior beliefs of horsemen.

A young horse’s pedigree biases it to be treated as either a dirt horse or a turf horse before any preferences are revealed on the track, and, in its subsequent exploits, we cannot confidently separate out the degree to which it is genetically suited to dirt or turf racing and the degree to which it has been habituated to the same by training and campaigning.

Still, this is a good example of some of the interesting data that TRC Global Rankings can produce. We will be working the system hard over the coming weeks for more ...