More evidence that Australia and New Zealand are the places to be to give female jockeys the best chance to flourish came at the weekend when Kiwi rider Sam Spratt took one of the only two G1 races run in the world last week.

Ms Spratt (pictured) triumphed in Saturday’s Harcourts Thorndon Mile at Trentham (which staged both those G1s). It meant a huge nine-point leap in the world jockeys’ rankings, lifting her 161 places to #226, which makes her the third highest ranked female in the world.

As you’ll see from the table below, 13 of the 16 women in the top 500 jockeys are from down under, with just one American and two Brits successful enough to make the grade. The column on the right shows the change in total rankings points since we last published the table. 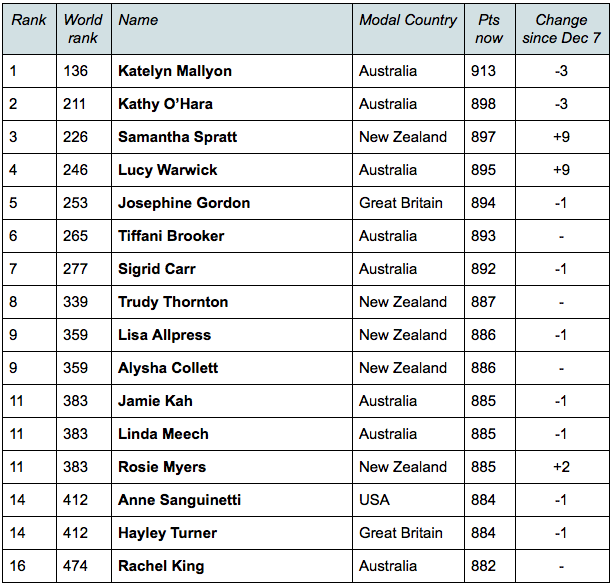 Spratt’s win on 22/1 shot Stolen Dance was her second G1 of the season - she landed the New Zealand 1000 Guineas on Hasahalo in November. The victory meant a seven-point week-on-week gain for the Cambridge stable of Murray Baker and Andrew Forsman, who are now 35th in the trainers’ standings.

As you can see from the video below, little went right in running for Spratt, but Stolen Dance was good enough to overcome a tough run. “We were three wide and got pushed out four and five wide so it was a gutsy effort,” she said.

“It was great, she’s been knocking on the door for some time and at least being out wide let her get into her own rhythm.”

In foal to Tavistock, the 6-year-old Stolen Dance may now be retired.

Spratt, 33, is part of a growing cohort of New Zealand riders who have been having a significant impact on the sport - as well as the jockeys currently in the rankings, other leading lights include current NZ Premiership leader Sam Collett and Danielle Johnson, neither of whom has had the opportunity to make a mark in Group racing lately.

Spratt is the second down-under female rider to make a major gain in since the start of the year: Aussie 20-year-old Lucy Warwick has had a similar surge thanks largely to her partnership with recent G2 winner Material Man. She is the fourth-highest ranked woman jockey in the world.