Field sizes are a hot topic in global racing at the moment. The number of horses lining up for the world’s best races is a key performance indicator of the health of the sport economically.

David Richardson, chairman of the American Graded Stakes Committee, said recently: “There is no question that field sizes in many of our races have greatly decreased.

“It becomes evident that, when your horse population decreases, there’s going to be fewer quality horses … What we do know is that field sizes for our major races have markedly decreased.”

While this is true on the scale of the last 50 years, a look at the last six years at least suggests that stability has been achieved in the U.S. The chart shows that, when the average field sizes of Grade 1, Grade 2 and Grade 3 races are added together, 2016 and 2017 show a slight increase over the neighbouring seasons: 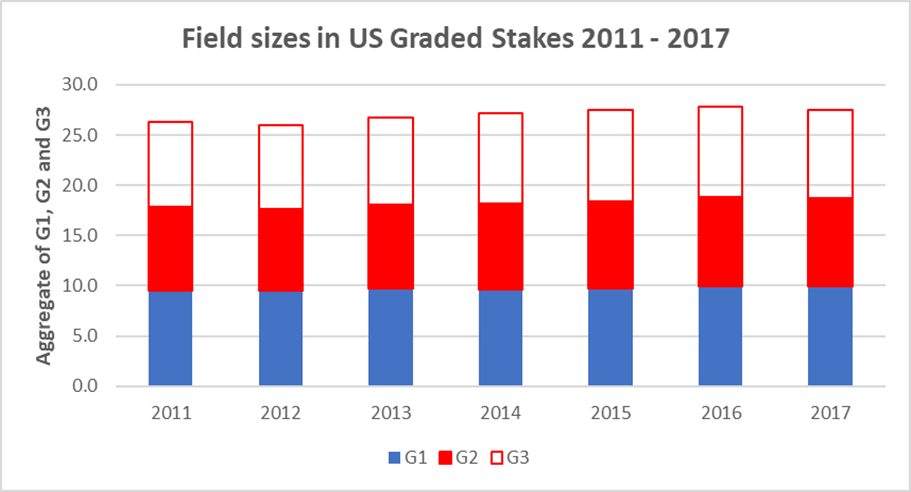 This data is derived from the top table on the right.

Richardson is right to be wary though, for the US ranks only above Ireland and Italy in terms of average field sizes for Group and Graded races, as the second table illustrates. 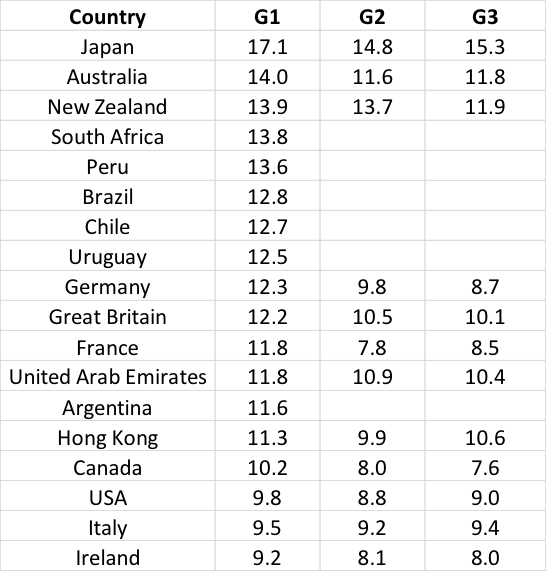 Japan is in a league of its own as far as field sizes for its best races are concerned. Incidentally, TRC Global Rankings equalises for this factor across the globe by using the metric Impact Value (IV) in place of Strike Rate (SR). One can easily see that achieving a SR of ten percent is more difficult in Japan than in the U.S. because it involves beating a higher proportion of rivals. IV normalises for field size because IV is the ratio of wins and expected wins considering the size of the field.

In last week’s article, which decried the sport of racing for failing to recognise the historic 2017 of Ryan Moore, I mentioned that many considered the designation of Australian Group races as flattering to the average winner, leading to calls – from Australian-based writers themselves – to downgrade some of the best races, rather than promote them as is the trend du jour.

This data provides something of a counterpoint, however. Even if the average G1 runner is weaker in Australia than some countries of Europe, for instance, at least there are more horses to beat.

In the case of the U.S., however, it is alarming that the field size for Grade 1s has stabilised in single figures. The most important implication of this doesn’t come from considering the average alone, but in tandem with the variance: while consistently average fields of nine or 10 are one thing, the potential for a drop to five or six runners in any given year is always there.