If you needed more evidence that Australia is the land of opportunity for female jockeys, take a look at the results at Flemington in Melbourne last Saturday. Of the four Group races on the richly-endowed card, three (a G1 and two G2s) were won by horses ridden by women.

Raquel Clark started the ball rolling by winning the G2 Danehill Stakes on Dalasan on her first ever ride at Flemington. The 26-year-old former Tasmanian, winner of the Adelaide premiership last season, will be back aboard the son of Dalakhani a week on Saturday for the G1 Caulfield Guineas.

The big race, the G1 Makybe Diva Stakes, featured a handful of leading performers using the one-mile contest as a handy warm-up on the road to the cups over much longer trips next month. Hartnell, Humidor, Rostropovich, Humidor, Yucatan and Gailo Chop were in the line-up, but the race was supposed to go the way of the prolific 4-year-old filly Mystic Journey, the 21/20 favourite.

That was until Jamie Kah, the world’s highest-ranked female jockey in the TRC Global Rankings, and 100/1 shot Gatting came along.

Kah, another former South Australian champion, was in sparkling form as Gatting stunned the crowd, holding off the sustained challenge of Mystic Journey (see video below). It was a second G1 win of 2019 for the 23-year-old, who made her debut in the Shergar Cup at Ascot last month.

Forty minutes later, it was the turn of 39-year-old Linda Meech, who took the G2 Bobbie Lewis Quality Handicap on the 4-year-old Zoutori. The 4/1 second favourite had two lengths to spare at the line - ahead of Parsifal, ridden by Kah.

Kah, of course, remains the top-ranked female in the world. Meech is up to third, and Clark enters the top ten at joint #9.

As this table of the top ten shows, the top five riders - and six of the top ten - are all based in Australia, and only one (U.S.-based Briton Sophie Doyle) rides in the Northern Hemisphere. 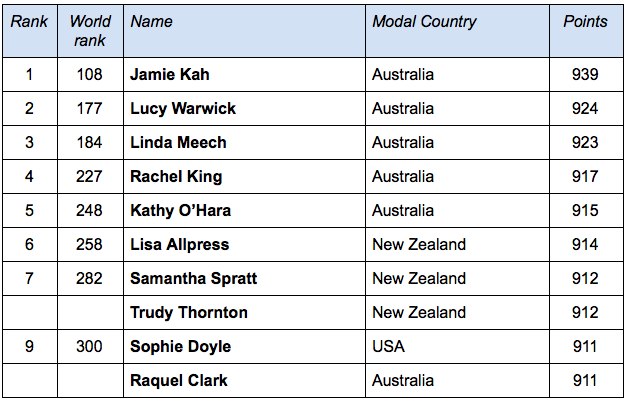