She’s earned more than £4 million in the past four weeks, and now Enable is up to 12th place in the list of worldwide all-time leading money winners. That makes her the highest-earning European-trained Thoroughbred in history.

Owner Prince Khalid Abdullah will pick up £1.6 million for the daughter of Nathaniel’s stirring victory in the Longines Breeders’ Cup Turf on Saturday. Added to her £2.5 million pay cheque after her second Prix de l’Arc de Triomphe win on October 7, that brings the filly’s career earnings to just over £8 million, which eclipses previous European #1 Highland Reel’s £7.5 million total.

It makes Enable one of four movers since we last published the list, on October 12. But she is not the highest-placed of the four. That honour falls to the horse who many believe is Enable’s only serious rival to the title of best filly or mare on the planet.

Indeed there are those - including the assessors behind the Longines World’s Best Racehorse Rankings - who rate Winx as the best horse of any sex. (Their next set of rankings are due to be published on Thursday).

The great Australian 7-year-old took her career earnings to £12.6 million on October 27, when she won the Southern Hemisphere’s most prestigious conditions stakes, the Ladbrokes Cox Plate, for an unmatched fourth time, and with it a cheque for £1.76 million. That makes her the second highest earner in history.

The daughter of Street Cry is still more than £1 million adrift of the leader, though. Arrogate, like Enable owned by Prince Khalid and Juddmonte Farms, has a total of £13.6 million after landing three of the world’s richest races - the Breeders’ Cup Classic, the Pegasus World Cup and the Dubai World Cup - in a five-month spell from November 2016 to March 2017.

Another Australian has made a big leap up in this latest list - 6-year-old Redzel. The son of Snitzel netted a whopping £3.8 million for winning The Everest at Randwick on October 13. He is 11th on the list with £8.42 million.

One horse who hasn’t appeared on the list - yet - is Accelerate. His earnings surged to £4.3 million after Saturday’s BC Classic win (first prize: £2.44 million) but you need a lot more than that to make this top 40. He is set to take up stallion duties at Lanes End Farm in Kentucky, but he may run once more before then - in January’s Pegasus World Cup Dirt Invitational. Victory there would certainly get him onto the list.

Meanwhile, the horse who finished third behind Accelerate on Saturday, Godolphin’s Thunder Snow, continues to progress. After adding another £400,000 to his tally, the son of Helmet is now on £6.8 million, which puts him 19th. 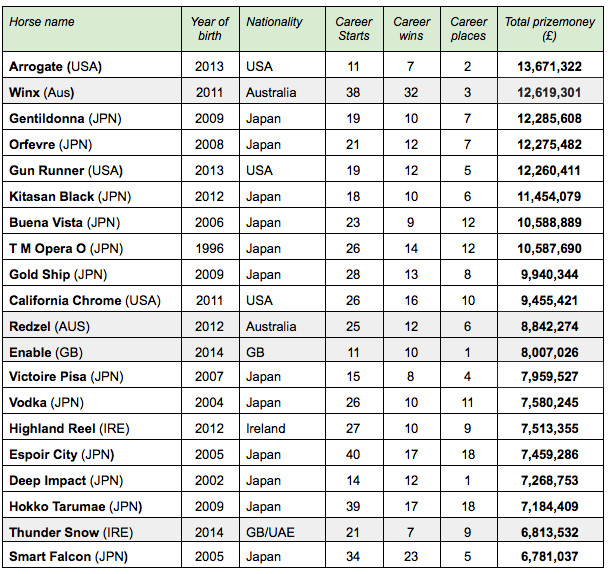