He’s been the world’s #1 stallion since we launched the TRC Global Rankings back in October, but now Galileo has been overtaken by Deep Impact. The mighty Japanese supersire goes top in the new updated standings after three big winners last week. Also closing in is Dubawi in third place. Here James Willoughby uses the TRC algorithm to compare certain aspects of the records of the three great stallions.

One represents the West, one the Middle East and the other the Far East. Galileo, Dubawi and Deep Impact are clearly the world’s three best sires, according to TRC Global Rankings, but each has taken his turn at the number one spot in the period for which we have the data.

In total, Galileo’s legacy as a stallion is greater than the other two currently, but this isn’t what TRC Global Rankings is measuring. Instead, we are focussed on who is the more likely to sire Group or Graded winners right now, and at present that sire is Deep Impact.

When the Japanese supersire and the Coolmore great have sired runners in the same race, it is Deep Impact who has come out on top – hands down. This is only a limited sample – there are just 23 Group or Graded races in which both have been represented – but the results are unequivocal, as the table shows:

Group or Graded races contested by stock of both since Jan 1, 2011

As we have written about before, Galileo’s brilliant overall record is concentrated in Britain and Ireland. As a result, his success is more seasonal than, say, Dubawi, who has had more success in Australia during the off-season in Europe.

Dubawi, too, had had the better of it when both have had a runner in the same Group or Graded race:

Group or Graded races contested by stock of both since Jan 1, 2011

Not surprisingly, Galileo’s record is substantially better with neither Deep Impact or Dubawi around…

Galileo on his own

Group or Graded races since Jan 1, 2011, with NO Deep Impact or Dubawi runner opposing

The TRC rankings algorithm cares about these direct meetings, but it also forms links between the performance of sires through third and fourth parties (common opponents in different races, and common opponents of common opponents). In this way, it creates a massive web of relationships much like internet search engines, using high-level maths to compute the influence of every sire (and jockey, trainer and owner in the other categories) against every other sire.

If we look at the time series of TRC Global Rankings points of the three super sires since 2011, interesting patterns emerge: 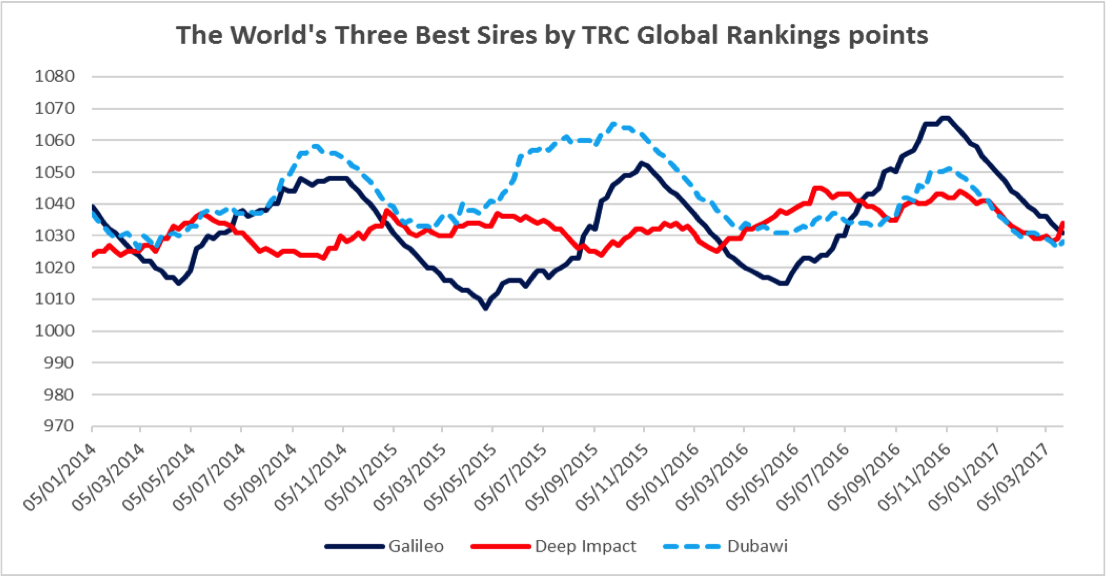 Galileo (dark blue) shows the most seasonality to his TRC Global Rankings points, with Dubawi next and Deep Impact third. This is mainly opportunity, but Dubawi seems more globally versatile than Galileo (and doesn’t have the advantage of having most of his best stock trained by Aidan O’Brien).

You can see from the graph that, right now, Deep Impact has headed Galileo in the ‘phony war’ part of the year, for Deep Impact, Galileo and Dubawi have all had higher points totals at different points.

A key aspect of the maths of the TRC Global Rankings algorithm in capturing the present value of a sire involves dealing with uncertainty. All manner of measures – back-tested extensively – are used by the algorithm to mitigate randomness. And the biggest cause of uncertainty is the passage of time.

Recent record of the big three

Record of the super sires in Group or Graded races since August 1, 2016, emphasising Impact Value

Since August 1 last year, Deep Impact has had the most winners of the three. “But he’s had the most runners too,” you might observe. This is true, but a metric that dominates strike rate when record in different races is compared is Impact Value (IV). We have evangelised about this metric in print because it is formed of the ratio between strike rate and expected strike rate, given the size of the field. (It is often referred to as ‘odds ratio’ in mathematical literature.) In other words, it neutralises field-size and is proven to capture effectiveness more accurately.

So, Deep Impact – who had three winners this week which count towards the TRC sires' standings (two G3s in Japan and the Dubai Turf victory of Vivlos at Meydan on Saturday) – is the hotter sire at present, but this could all change when the European season clicks into gear and O’Brien unleashes the 2,000 Guineas favourite Churchill and his paternal siblings.

Global Impact: the Rise of the Japanese Thoroughbred

Watch this new feature documentary above from Sky Racing in association with Arrowfield Stud tracing the remarkable 30-year transformation of Japanese racing and breeding from industry outpost to global powerhouse, beginning with the first running of the Japan Cup in 1981.

It is the story of a nation's determination to dominate racing at the highest level, of a family's bold ambition to revolutionise breeding and of a single stallion reshaping of an entire industry.