When you’re winning as many Group races as Darren Weir is right now, it has to make a difference to the world rankings. He overtook Chris Waller as the highest-ranked Australia-based trainer two weeks ago, and his remorseless advance kicked into overdrive at the weekend, catapulting him all the way up to world #2.

The Victorian was responsible for four Group winners last week - two G3s, one G2 and Black Heart Bart’s G1 victory in the italktravel Futurity Stakes at Caulfield - taking his tally to seven in two weeks.

It also meant a gain of six ranking points week on week (a huge figure in the rarified air at the top level in the standings, where the TRC algorithm expects the individuals to maintain a strong level of performance just to stand still). And that took him up from fourth place past the Americans Chad Brown and Bob Baffert, who are now tied for third. 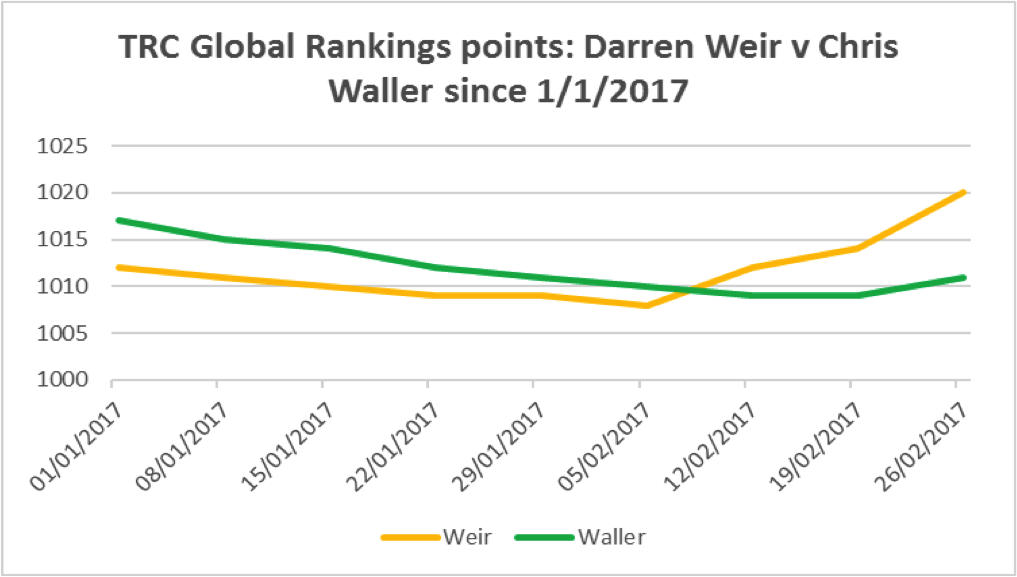 Weir has forged nine points clear of Waller - not that it was a bad week for the New Zealander. He grabbed two Group races himself, both at Randwick (one G3 and Winx’s G1 Chipping Norton Stakes victory). That put him two points up for the week, but it was still not good enough to keep up with his rival. The graph of ranking points totals since the start of the year shows just how strong Weir’s momentum is at the moment.

In fact, Waller only just held onto fifth place as another Australian surged up to join him thanks to the biggest move of the week.

John Moore doesn’t train in Australia, of course. He’s been operating in Hong Kong for years, and last Sunday morning was the perfect illustration of his dominance there.

The 66-year-old not only won both G1s at Sha Tin, where Group races are relatively rare and always of a high standard, but saddled the 1-2-3 in the first, the Queen’s Silver Jubilee Cup (Helene Paragon, Able Friend, Joyful Trinity - see YouTube video below). His Hong Kong Derby winner Werther took the other G1, the Citi Hong Kong Gold Cup.

Helene Paragon was given the joint highest Racing Post Rating of the week, alongside G2 Nakayama Kinen winner Neorealism on 120 and two pounds ahead of Gun Runner, an impressive G3 winner at Oaklawn Park the previous Monday.

Neither Winx nor Werther, both with previous runs rated considerably higher, were judged to have run to their best in their G1 victories at the weekend. Winx, of course, wasn’t asked to exert herself unduly in the sapping Sydney mud (she was allotted a mark of 116), and Werther achieved only 115 after scrambling home in a slow-run contest that didn’t play to his strengths.

Gun Runner’s sire, Candy Ride, broke into the top ten in the sires’ standings, moving from 12th to #9, two G3 wins (Gun Runner’s and another at Gulfstream) contributing to a six-point gain week on week.