In a major three-part investigation into the stark realities of training racehorses in Britain for the biggest and smallest stables, Daniel Ross delves into nearly 20 years of British Horseracing Authority statistics. Here is part one. Part two will be posted on Friday.

For obvious reasons racehorse-training is absent from the canon of get-rich-quick career opportunities. Offsetting training fees and prize money earnings against the costs associated with buying or renting a yard, the upkeep of gallops, staff, feed, yard equipment, travel, tack, bedding, and all the other unavoidable stable expenses leaves most trainers hunting the sofa cushions for spare change at the end of the month.

Nor is this a modern phenomenon.

In this article from nearly 20 years ago, John Gosden is quoted as saying that “80 percent of trainers” in England are insolvent. “If you cashed them tomorrow at the bank you would be in a considerably negative situation,” he added. According to many trainers currently operating, the situation has since worsened.

Is, as some fear, the economic climate getting progressively tougher for the UK’s smaller operators? And, conversely, are the nation’s largest stables consolidating their power at the head of the table?

This argument — that so called ‘super trainers’ are monopolizing the industry — has circled in the U.S. for decades, which is why, last year, TRC dug down statistically into a topic that had been hitherto tackled largely anecdotally. What did we find?

That between 2007 and 2016, the nation’s largest stables had remained steady in number, while the number of smaller stables, by comparison, had dropped off precipitously.

What’s more, these super trainers in the U.S. have been accruing larger percentages of prize money, while trainers at the other end of the scale saw their share of the overall prize money shrink.

To see whether the same dynamic is at play in the UK, we asked the British Horseracing Authority (BHA) for data on the number of starts and the amount of prize money individual flat trainers have accrued each year since 2000.

This is far from a comprehensive and definitive look at the issue. We don’t, for example, account for the number of individual horses each trainer started per year. Nor do we factor trainers’ overall stable numbers, which include horses that never saw a racecourse. These are all necessary data points if we’re to understand the situation fully. For example, in the U.S., statistics show that super trainers start their horses less often than the rest of the training population.

The following, however, still provides a useful glimpse into broader industry trends, and what it illuminates is how it appears that the UK’s biggest yards have, since the turn of the millennium, slowly cemented their position at the head of affairs.

There are some significant differences between the U.S. and the UK’s racing industries. Unlike the U.S., where nationwide prize money levels, numbers of individual trainers making at least one start per year, and numbers of overall runners are on the decline, the UK has seen upticks in these areas. 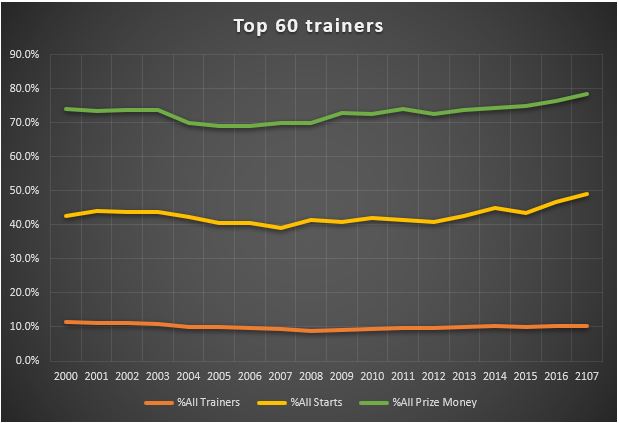 The top 60 works out as a percentage of overall trainers between nine and 11 percent, depending on the year.

To put this into context, in California where the industry is largely seen as struggling, the top 20 percent of trainers won nearly 84 percent of earnings in 2016. 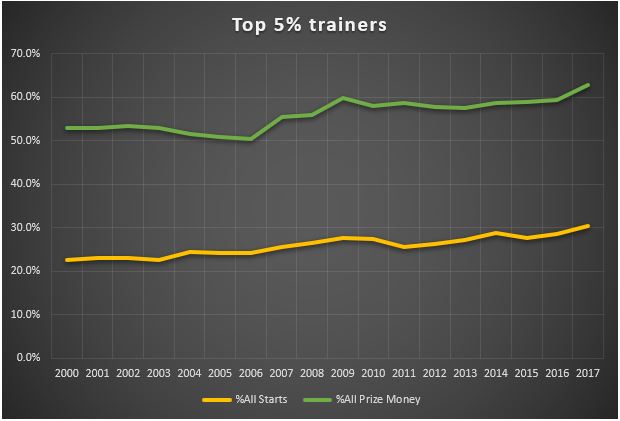 The top five percent of trainers in the UK comprise between 26 and 34 individual trainers, depending on the year.

When it comes to prize money, the pattern isn’t too dissimilar.

In regards percentage of overall prize money won, the top five percent stayed below 53.5 percent until 2007. Their share of prize money even appeared to be shrinking up until that point. However, between 2007 and 2016, the amount of prize money won by the top two percent of trainers grew from 55.4 percent to 59.4 percent. 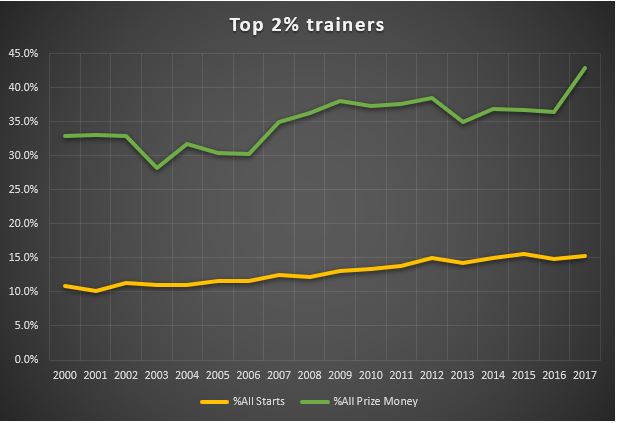 The top two percent of trainers is an understandably small number — between ten and 13 individuals per year.

In terms of prize money, the pattern resembles that for the top five percent.

Between 2000 and 2006, the percentage of overall prize money accrued by the top two percent decreased from nearly 33 percent to about 30 percent (bottoming out at 28.2 percent in 2003).

Last year, 12 individual trainers won nearly 43 percent of all prize money (£40 million) — a jump of nearly six percentage points from the year before. This leap is likely explained by the record earnings of table-toppers Aidan O’Brien and John Gosden.

ON FRIDAY: Daniel Ross looks at events at the bottom of the trainer ladder, and break down prize money distribution over the last ten years in terms of class of race and individual racecourse.