Bob Baffert has been a staple of TRC Global Rankings since the first edition produced internally to us on January 1, 2014. He is currently our #2 trainer in the world and #1 in the U.S., the latter distinction one he has shared with fellow outstanding horsemen Chad Brown and Todd Pletcher.

In fact, Baffert has never been higher than #2 and never lower than #9 in the 191 different iterations of our classifications - amazing consistent by any measure. The distribution of Baffert’s rankings is shown in Figure 1 here: 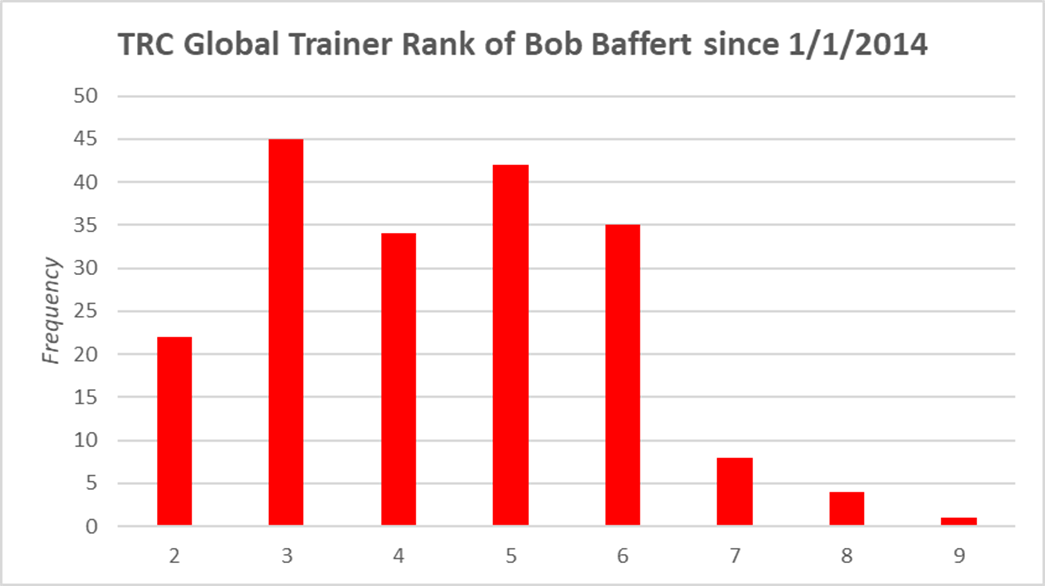 The peak of Figure 1 – the ‘mode’ of the distribution – is ranking spot #3, which Baffert has occupied for 45 of the 191 weeks or 23.6 percent of the time. But this bar plot does not reveal the trend in Baffert’s performance, which is shown better by TRC Global Rankings points in Figure 2 below.

This shows that Baffert’s ranking points fell as low as 1001 on the week of June 19, 2016. This is still above the benchmark we consider arbitrarily as ‘elite’, but it marked a sea change in Baffert’s relative impact and efficiency on the world stage – which is what the maths that power TRC Global Rankings is trying to capture.

What the rankings were reflecting was the kind of natural variance in the fortunes of every trainer in the world not named Aidan O’Brien. Though our numbers are not disproportionately affected by one horse, 2015 US Triple Crown winner American Pharoah had run his last race seven months before in the Breeders’ Cup Classic, and it would be five more months before a certain horse called Arrogate began to emerge. 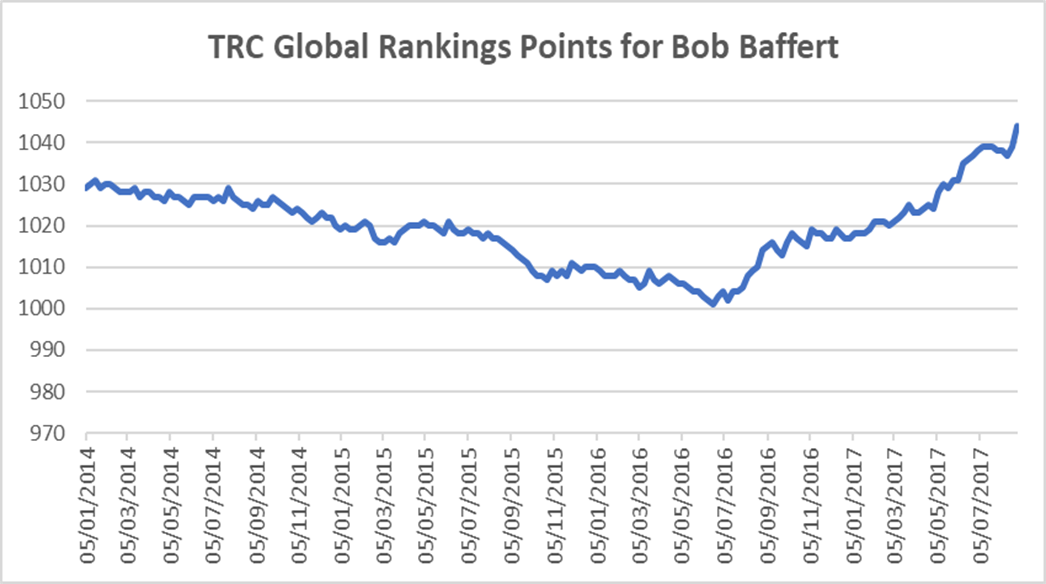 So it can be understood how Baffert’s two leviathans had bookended the local minimum of his rankings points seen at the nadir of the blue line of Figure 2. But observe the gradient since. Led by the phenomenal Arrogate, Baffert has absolutely piled on Graded winners since like Steph Curry drains three-pointers for the Golden State Warriors.

Data since start of rankings window in 2011

As a measure of the currency of Baffert’s impact, three of the ten horses listed in the table have won Grade 1s for him within his last four Graded runners.

First, Collected led home a 1-2 for the stable in the Pacific Classic at Del Mar from a below-par Arrogate, then West Coast landed the Travers Stakes at Saratoga, before Drefong posted the highest RPR in the world last week (128) when winning the Forego at the same track.

This all goes to show what horsepower the ‘Silver Fox’ can call on right now. There is a 31-point gap between him and O’Brien. It is a longshot he can bridge the gap because the Irish legend will not be stopping, but Baffert’s position as U.S. #1 looks assured, and his overall résumé guarantees a legacy as one of the greatest trainers in the sport’s history.