Since the start of the TRC Global Rankings window on January 1, 2011, Todd Pletcher, Bob Baffert and Chad Brown have jointly dominated the slot as leading trainer in the U.S. The triumvirate have portfolios with different strengths and weaknesses, and they excel on different race tracks, but all three are at the top of their game.

All three are classic winners in 2017. Pletcher saddled Always Dreaming to the win the Kentucky Derby, Baffert countered with Abel Tasman in the Kentucky Oaks, while Brown upset Pletcher’s Derby winner in the Preakness Stakes with Cloud Computing.

In this week’s iteration of the TRC Global Rankings – Week #172 of the rankings evolution – it is Baffert who rules the roost domestically, while sitting in second place globally behind Irish genius Aidan O’Brien, with 1028 points; Brown is #4 overall with 1022 points, and Pletcher #5 with 1015 points.

Baffert has combined top-level strikes with Arrogate in the Pegasus World Cup Invitational and Dubai World Cup with a raft of other black-type performers to head Pletcher, Brown and all the others just the 14th time, dwarfed by Pletcher’s 142 weeks at #1, and, surprisingly, also behind Brown’s 26 weeks in front.

After Brown’s terrific training performance with Cloud Computing – freshening the highly promising Gotham runner-up after a dull effort over a biased strip in the Wood Memorial back at Aqueduct – he was keen to make the point that his reputation as a turf specialist is not the way he views himself.

When you look at efficiency numbers, dirt and turf, Brown comes off true to his word. He happens to have exploited opportunities on the grass because that was the correct strategy, given his portfolio of horses and owners, but anyone who hesitates to send him a horse based on its surface requirements is making a mistake.

There is no doubt, however, that Brown has made his hay on the grass. Statisticians don’t like pie charts, for good reason, but the two alongside convey the desired message eloquently.

The top chart shows the relative success that Pletcher and Baffert have had on dirt.

Brown’s eponymously coloured slice is a meagre helping. While, in the bottom pie chart, Brown’s slice of the turf racing pie would be a hearty repast when compared with Pletcher’s and, most notably, Baffert’s. 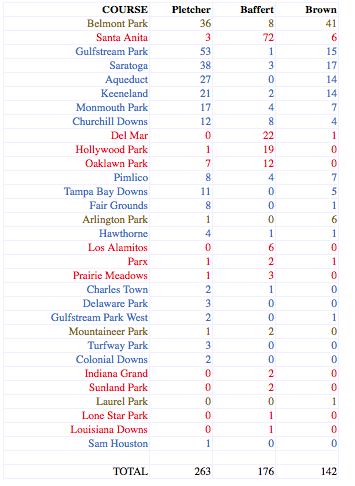 All three men have their favoured constituencies around the U.S. The table alongside, coloured according to the winningmost trainer and ranked by total Graded wins by all three, displays the Pletcher hegemony in the East and the Baffert kingdom to the West; the twain seemingly cannot penetrate Brown’s fortress Belmont, where a load of top-class grass racing has proved to be the New York State-born trainer’s preserve.

The numbers total Graded stakes wins since 2011; across all six years, Brown has a positive gradient, Pletcher a negative gradient and Baffert remains consistent, save for a lull in 2016. All the relevant information is distilled and expressed, as usual, by the TRC Global Rankings algorithm, and shown in the usual time-series plot here in the chart below.

America’s three best trainers are responsible for some of the best horses we get to watch, and the synergy between their talent and that of their horses is a big part of what makes U.S. racing so compelling. Brown had the best of 2016, Baffert is on top in 2017, but who would count Pletcher out, given his panoply of stars and the confidence he engenders in some of the world’s most powerful owners.

It’s a three-cornered fight and, for once, we wouldn’t want to call the winner.