Many elite jockeys were in fine form last week, but perhaps the story of the week in terms of the TRC Global Rankings was British jockey Adam Beschizza riding a Graded-race double on the Million Preview card at Arlington Park in Chicago.

ADAM BESCHIZZA (+9pts, #163 from #242) drove home Bandua to win the G3 Arlington Handicap for older horses and Faraway Kitten to land the G3 American Derby for 3-year-olds. He has four career Graded stakes on his resume.

Note here that the Arlington stewards apportioned a three-day ban to Beschizza for interfering with last-place finisher Strong Will in the American Derby, but he and his mount were allowed to remain in first place.

Beschizza – now based at Ellis Park, Kentucky – has been a great success since moving to the U.S. to ride there permanently at the end of 2017 at the winter meeting at Fair Grounds. Now the winner of more than 215 races and $8.5m in the U.S., he has partnered the mare Mom’s On Strike to win G3s at Churchill Downs and Keeneland.

Arlington Handicap winner Bandua started his career with trainer Dermot Weld (world #9 as recently as 2016, would have been higher still before TRC Global Rankings began in 2014) in Ireland. A 4-year-old colt by The Factor (+3pts, #144 from #189), he broke the 9.5f track record at Arlington while gaining his first stakes win under Beschizza.

Bandua is handled by the private trainer of Calumet Farm (+1pt, #75 from #84), Jack Sisterson (+4pts, #222 from #262). Last year, Weld had sent Bandua over to finish third in the G1 Secretariat Stakes on the Million Card itself.

Though Beschizza has made a far greater impact at the elite level of the sport in the U.S. than he was able to do in Britain, his talent was evident long before he crossed the Pond. In 2015, he completed the historic ‘Autumn Double’ of handicap races at Newmarket when beating large fields for the Cambridgeshire and Cesarewitch – the latter at odds of 50/1.

This is a reminder that TRC Global Rankings measures the probability of a head-to-head success over other competitors in the coming week; it makes no claim to measure skill independent of opportunity. The latter is strongly correlated with success in horse racing – and in life in general.

Beschizza will need plenty more opportunity to punctuate the ranked list of jockeys by Group and Graded wins in 2019, which appears here: 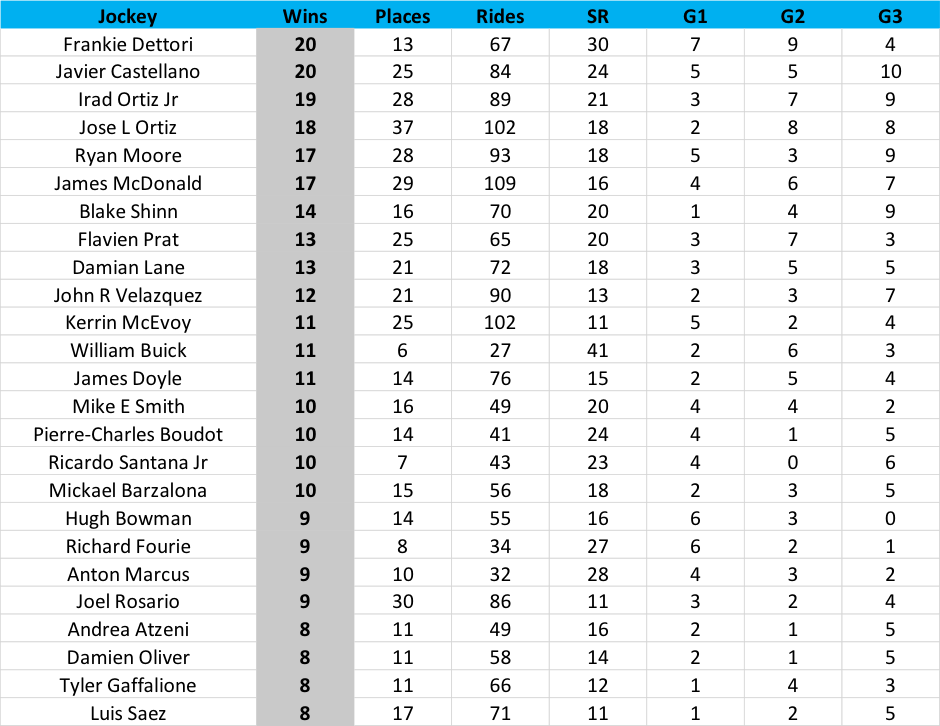 British-based Frankie Dettori (+2pts, stays #2) and U.S.-based Javier Castellano (+1pt, #10 from #9) continue to dispute the lead after one win each this week.