Last year, we took a statistical dive into the issue of whether the growing divide between the U.S.’s largest and smallest stables was similarly in effect across the Pond.

We asked the British Horseracing Authority (BHA) for data covering the number of runners and the amount of prize money individual flat trainers accrued each year between 2000 and 2017. Crunching this data, we found that the nation’s largest stables were indeed starting a greater percentage of runners and winning a greater percentage of overall prize money during that time.

At the opposite end of the scale, small stables were beginning to see the reverse happen, though the trends weren’t as pronounced for smaller trainers.

In response to our findings, the BHA’s chief executive, Nick Rust, said that he expected a new funding mechanism implemented in the UK last year — one that boosted prize money in low and middle tier contests — to have an impact on the consolidation seen among the top trainers, and the attrition witnessed at the bottom end. But Rust didn’t expect the changes to trigger a “dramatic reverse”.

Was he correct? Daniel Ross looks at the figures for 2018.

Having crunched the numbers on 2018, it would be safe to say the initial results are mixed. 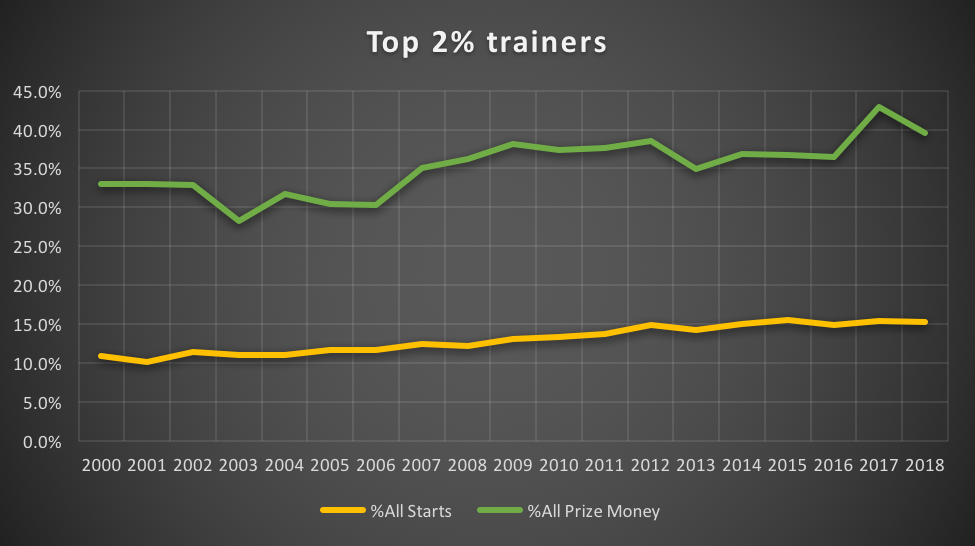 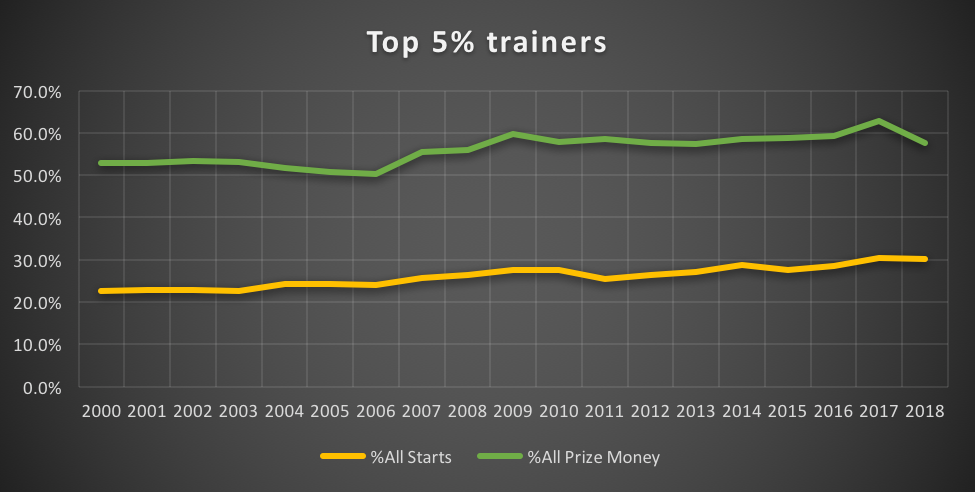 As for the nation’s top five percent of trainers’ percentage share of starts, the figure remained fairly static from 2017 levels (30.1 percent of all starts). Since 2000, however, these trainers have seen their share of starts grow by nearly eight percent. 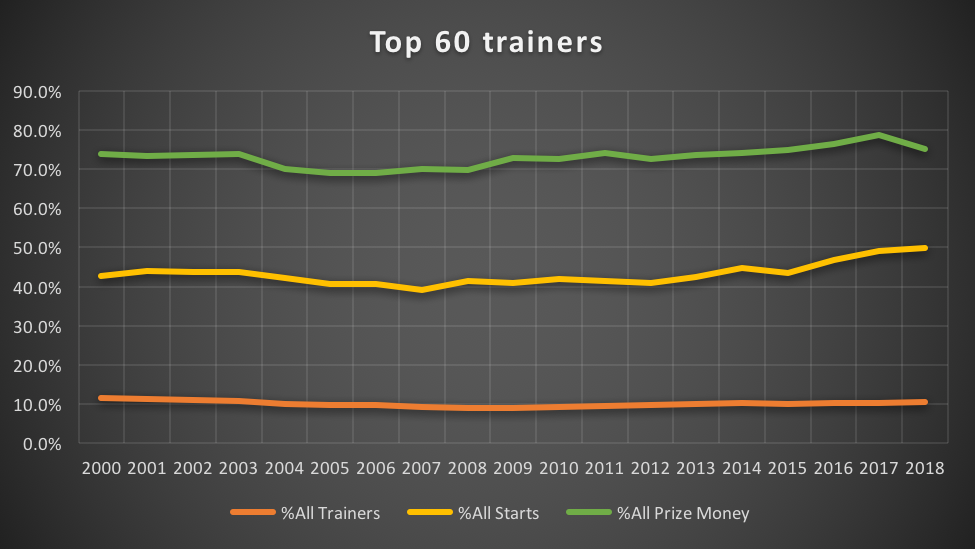 Unlike the top two and five percent of trainers, the top 60 saw their share of starts increase again last year, to a high of 50 percent. This figure has been steadily increasing since a low of under 40 percent in 2007. 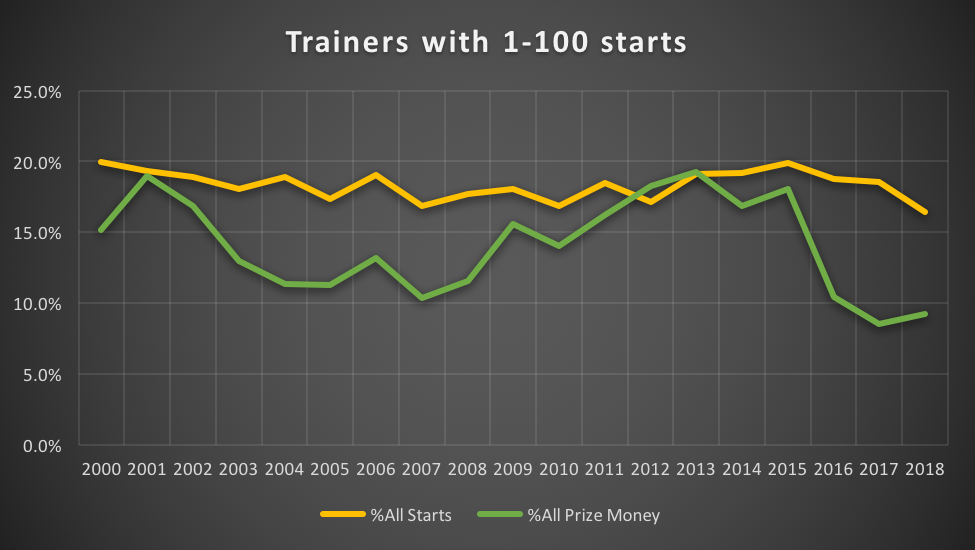 Their percentage share of prize money (9.2 percent) rose slightly last year, compared to 2017 (which was a low since 2000). But the figure is still nearly half what it was as recently as 2013. This means that trainers with more than 100 starts per year, roughly 30 percent of the trainer population, or about 170 trainers, take home 90 percent of the prize money. 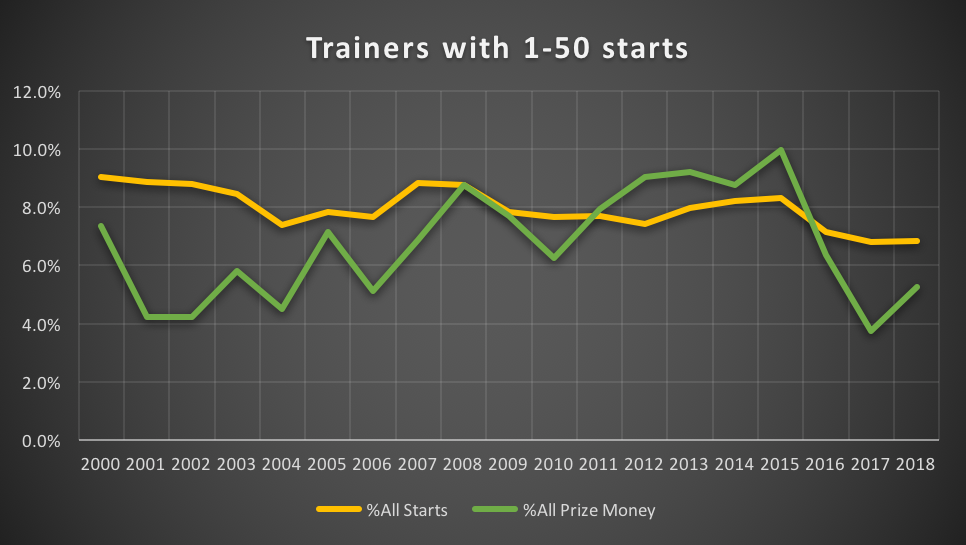 The same kind of trend delineating the trainers making 1-100 starts per year is in effect for those making 1-50 starts, including individual trainer numbers, which are at their lowest point since 2003

Their share of overall prize money rose 1.5 percentage points between 2017 and 2018. But again, the figure is still well below its high in 2015.

As for overall starts, trainers making 1-50 starts per year made the same percentage share as in 2017, the lowest since the turn of the millennium.

We reached out to a handful of the same people as last year — those at the business end of the sport — to gauge their reactions to the latest 2018 data.

Hovering over the responses were a number of issues muddying the waters. For one, the potential impacts from the reduction to the maximum stake gamblers can bet on fixed odds betting terminals (FOTBs). In a preemptive strike, Arena Racing Company (Arc) slashed prize money at its racecourses, prompting boycotts among trainers, but the company relented, and agreed to a temporary increase in lower-grade races.

Then, of course, lingers the ever-present specter of Brexit, and the uncertainty lying in its wake.

In last year’s series, Johnston offered a counter-argument to the common train of thought that the larger stables annexing a larger slice of prize money and share of starts as compared to the smaller yards was necessarily a negative trend.

“Yes, there’s a ridiculous turnover of trainers in Britain because it’s a hard game to make money at,” he told the TRC. “But we shouldn’t be legislating to keep non-viable businesses going. Nobody’s stopping the small trainers from becoming big trainers — if they’re good.”

And in that regard, Johnston remains unchanged in his thinking. “The popular thing to say is, ‘yes, we must support the small stables, and yes, we must support small-grade races.’ And I have reservations about that,” he said. “I think the most important thing is for racing to remain aspirational, for people to strive to improve all the time, and for the best horses to be rewarded.”

As such, he doesn’t see the BHA’s new funding mechanism implemented last year — which was coined as a ‘grassroots’ initiative — as something that will ultimately benefit the industry, especially when it comes to improving quality. “I’ve never liked the description of ‘grassroots races’ and applying the term to low-grade handicaps,” Johnston said.

As to whether the cut in the maximum stake that can be played on FOBTs will impact the already attenuated prize money levels in the UK, Johnston’s unconvinced. “Is it just another excuse to plead poverty? Another excuse to close betting shops, because everything is shifting online anyway? I’m not sure,” he said.

“I’m not absolutely convinced that stopping people from putting £100 on one throw of the machine actually makes a difference to how much they lose.”

Kelleway was highly critical last year of the situation facing smaller trainers, especially on the issue of how the big-money, big-number owners appear less inclined to patronize the smaller, less fashionable yards.

“What’s happening in our game is that it’s very much a sport of kings again,” said Kelleway, last year. “Gone are the days when the trainer started off a [stable] lad, did well, got a few quid together, grabbed a couple of owners, started training and succeeded on their ability,” she added. “Ability as a trainer gets you nowhere. It’s not what you know, it’s who you know.”

But when the TRC spoke with Kelleway recently, she was in two minds about the economic pressures weighing in on those trainers scratching out a living at the bottom of the ladder.

For one, trainers without the financial wherewithal to do the job properly shouldn’t continue with a license by cutting corners, she said.

In explanation, she pointed to two horses that had just arrived from another yard, the trainer having quit through financial constraints. One horse had a tendon, the other was in poor condition, she said, adding that she had lost horses to the former trainer several years ago after the individual had offered her owners a 30 percent cheaper training rate.

“They’ve only got themselves to blame,” Kelleway said. “If you can’t do the job properly and charge the right training fees, you’ve got to leave the sport. Those bad owners, they take [advantage],” she said.

“I haven’t won classic races, but I’ve done well for myself,” she added. “I put money back into the place. But I’ve made sure I’m strict about who I have as owners. These stupid trainers, they run their horses without getting paid. I’m not stupid, I don’t work for nothing. Bottom line, you’ve got to charge the right training fees.”

By the same token, “You need the prize money to go up to encourage the people who do charge proper training fees to get a little bit back,” she said.

“You’ve got to make it worthwhile people turning up,” Kelleway added. “You think how much it costs to take a horse to the races. I would cost me £120 to fill the lorry up, £100 to pay a driver, £60 to get a lad there. That’s nearly £300 before you start. Then you’ve got to think about the wear and tear of the lorry. And I’ve got to give myself something. Before you’re even going somewhere like Lingfield, you’re forking out short of £500 before you start. Then, you’re finishing third for £300, or getting £100 for fourth. It’s a joke.”

Duffield was one of a number of people last year who expressed little surprise to hear of the trends identified in the TRC’s three-part series.

“The difference now is that they’ve always dominated, but not in such a strong way,” Duffield said then of the nation’s largest yards. “Because their numbers are so great, it’s definitely impacting the small and medium sized yards.”

In a recent email to TRC, Duffield warned that the uncertainty over continued prize money levels — epitomized by the events surrounding Arc, which she called the “tip of the iceberg” — means that the nation’s smaller trainers will, at least in the near-term, continue to struggle.

Racing officials, trainers, and owners “have been getting warnings for 18 months of prize money cuts in 2019, but when it came the industry reacted with shock, horror and dismay,” she wrote.

Nevertheless, Duffield added that the NTF, the Levy Board, the BHA, and the Racehorse Owners Association “have managed to secure prize money levels for 2019 and 2020 at 2018 levels, which is the highest we have ever seen”, Duffield wrote.

The spectre of Brexit, however, “is a shocking mess,” she added. “And we have little idea of how badly it will impact racing, but it is sure to have consequences.”

Berry told TRC last year that the prize money increases the UK had enjoyed over the course of two decades had been funneled primarily upwards, to the detriment of the bottom-level races.

Nevertheless, the BHA’s new funding mechanism, which was designed to change that, failed to move the needle, said Berry. “We’re still heading in the same direction, i.e. the big getting bigger and the small getting smaller,” Berry wrote, in an email.

“The increased percentage of prize money won by smaller stables is a slight, temporary, one-off bucking of the trend, prompted by Nick Rust’s initiative to boost prize money in the lower tiers. That’s happened and isn’t going to keep happening; and the current Arc situation suggests that it might be going to unhappen (if I can use a word that doesn’t exist) anyway,” he wrote.

Berry described the situation with Arc as “a sign of things to come” for other racecourses. “I suspect that too many people have not yet taken on board how much the change in FOBT legislation is going to affect all racecourses’ income,” he said.

“They are all going to have to reduce expenditure somehow or other, and the likelihood is that they’ll all find that prize money is one of the outgoings which has to be cut. And that is bound to hit the lower tiers most significantly, in percentage terms if not actual.”

It should be pointed out that leading bookmaker Ladbrokes Coral has said the impact of the FOBT maximum stake reduction has been less severe than feared since it came into force on April 1. Rival William Hill, however, reported a 40 percent fall in FOBT revenues in that time period.

Meanwhile British racing’s leaders are having to deal with a £5 million funding shortfall after income from the Levy – the contribution from the bookmakers based on a percentage of their gross profits – fell unexpectedly in the last financial year.

Not much good news for hard-pressed trainers there.