For lovers of racing, little compares to an afternoon (or evening) at the track. The sport is best experienced in the flesh, and the world’s race courses offer diverse ways to enjoy this pursuit. While we can’t literally transport you to the races, we’ll do our best to bring these tracks to you in a series of regular profiles. Today, in the second part of his four-part profile of historic York Racecourse in England, Sean Magee outlines the course’s racing year.

Read about the history of York Racecourse

Read about the inside story from the man at the helm

Some of the very best horses in British history – including Eclipse, Brigadier Gerard, and Frankel – have experienced moments to remember on the Knavesmire during the past two centuries, which is only to be expected as the course is blessed with a racing programme of the highest quality. In 2016, it was second only to Ascot in terms of average prize money per racing day on British racecourses.

Seventeen days racing are scheduled for York in 2017. The highlights are:

Three-day fixture in mid-May in which many horses destined to make their mark in the big races later in the year are given an early airing – notably those being aimed at the Oaks and Derby at Epsom early the following month.

G2 race over 1 mile, 2 furlongs, 88 yards; first run in 1958. Named after the last Epsom Derby winner to be trained in the north of England: Dante, who won the final wartime version of the “Blue Riband of the Turf” at Newmarket Racecourse’s July Course in June 1945. Between 1960 and 2016, ten horses have won the Derby after landing the Dante Stakes: St Paddy, Shirley Heights, Shahrastani, Reference Point, Erhaab, Benny The Dip, North Light, Motivator, Authorized and Golden Horn.

G3 race over 1 mile, 2 furlongs, 88 yards; first run in 1961, named after the Yorkshire-trained filly who won the 1,000 Guineas and Epsom Oaks in 1949. Since the race’s inception in 1960, six Musidora winners have gone on to win the Oaks: Noblesse, Bireme, Diminuendo, Snow Bride, Reams Of Verse, and Sariska. Another notable winner is Indian Skimmer.

G2 over 6 furlongs, with a £165,000 purse. One of the best early-season opportunities for top sprinters.

G2 over 1¾ miles. First of the so-called “Cup” races for the leading stayers – horses who will have their sights set on the Gold Cup at Ascot.

In 2017, top race of York’s wildly popular annual charity day is the  Macmillan Charity Sprint Trophy, a handicap over 6 furlongs.

The £200,000 John Smith’s Cup over 1 mile, 2 furlongs, 88 yards in mid-July is one of the biggest betting races of the year. First run in 1960 as the Magnet Cup, this race represents the longest-standing sponsorship in Flat racing.

Held in mid-August, and not only York’s showpiece but also one of the great events of world racing, with three G1 races, a famous handicap, and a large and enthusiastic crowd – in effect, Royal Ascot with the stays loosened.

The Group 1 highlights of the meeting are:

A race that began in 1972 as the Benson & Hedges Gold Cup, and instantly made headlines beyond the racing pages – as that first running saw the only defeat in an 18-race career for the great Brigadier Gerard, beaten by 1972 Epsom Derby winner Roberto, ridden by the unknown (in Britain, at least) Panamanian jockey Braulio Baeza. The race provided more shocks in its early years, with defeats for such odds-on hotpots as Rheingold, Grundy, Artaius, and Oh So Sharp, but in recent times, it has also seen some unforgettably glorious moments – none more memorable than the 2012 race, when Frankel scorched clear of a top-class field to beat Farhh by 7 lengths, with St Nicholas Abbey third. Frankel’s victory epitomised the key ingredient of the International Stakes: sheer quality.

First run in 1849, the Yorkshire Oaks for fillies and mares, 3-year-olds and older, is the natural next step for horses who have run in the Epsom Oaks in June or Irish Oaks in July (or both). The last horse to win all three was Alexandrova in 2006, while the continuous quality of the race is advertised by other well-known recent winners, among them Islington (who won the race twice), Peeping Fawn, Dar Re Mi, Midday, Blue Bunting, The Fugue and Seventh Heaven.

One of the great races of Europe over the minimum distance, first run in this form in 1922. The Nunthorpe Stakes regularly attracts the very best equine speedballs – including winners Cadeaux Genereux, Dayjur, Lochsong, Pivotal, Kyllachy, Oasis Dream, Borderlescott (who won the race twice, in 2008 at Newmarket, after the York meeting had been lost to waterlogging, and 2009 on the Knavesmire), Sole Power (100-to-1 winner in 2010 and winner again in 2014), Ortensia (first Australian-trained winner at York in 2012) and the dual winner Mecca's Angel (2015 and 2016). In 1997, Coastal Bluff and Ya Malak ran a dead heat.

And the big handicap of the meeting – indeed, the richest flat handicap of the year in Europe – is the Ebor Handicap (named after Eboracum, the Roman name for York) over 1¾ miles, a famous old race (first run 1843) whose roll of honour includes the great mare Gladness, trained by Vincent O’Brien and ridden by Lester Piggott, in 1958; dual Champion Hurdler Sea Pigeon in 1979; and old favourites such as Jupiter Island, Further Flight and Sergeant Cecil.

Beyond those four showpiece races, the Ebor Festival features many other high-class contests, including:

Great Voltigeur Stakes for 3-year-olds, an informative trial for the St Leger, final Classic of the season, the following month;

Gimcrack Stakes, one of the most prestigious 2-year-old races of the season, whose previous winners include the great Mill Reef in 1970;

The main event of York’s final meeting is the Coral Sprint Trophy, a competitive handicap over 6 furlongs. 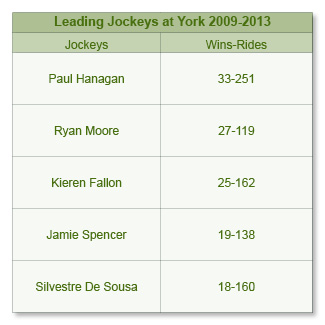 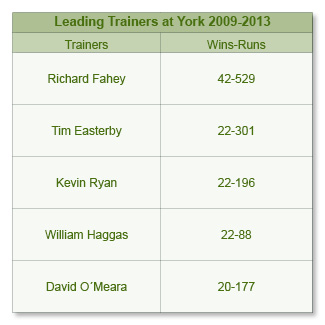 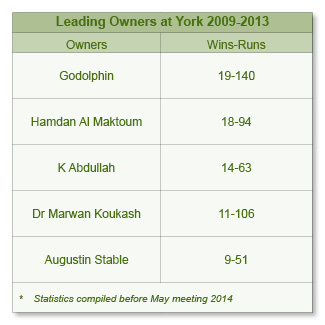