Sensible use of TRC Global Rankings has shown itself to be a valuable indicator of likely results of racing around the world, which is precisely what they are designed for. They are not merely a reflection of who has been excelling on the racecourse, they are intended to show who is likely to excel in the future. Here we check out what they are saying about tomorrow’s Emirates Melbourne Cup at Flemington.

In pale blue towards the right of the table below are the current TRC Global Rankings for each of Jockey, Owner, Trainer and Sire. 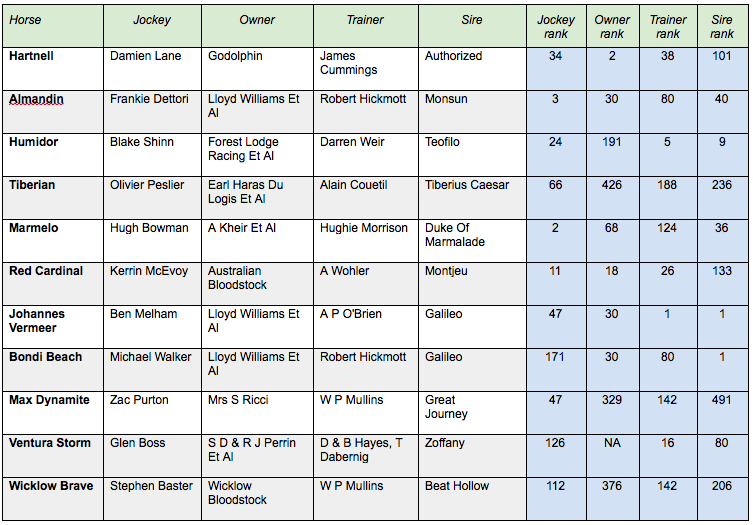 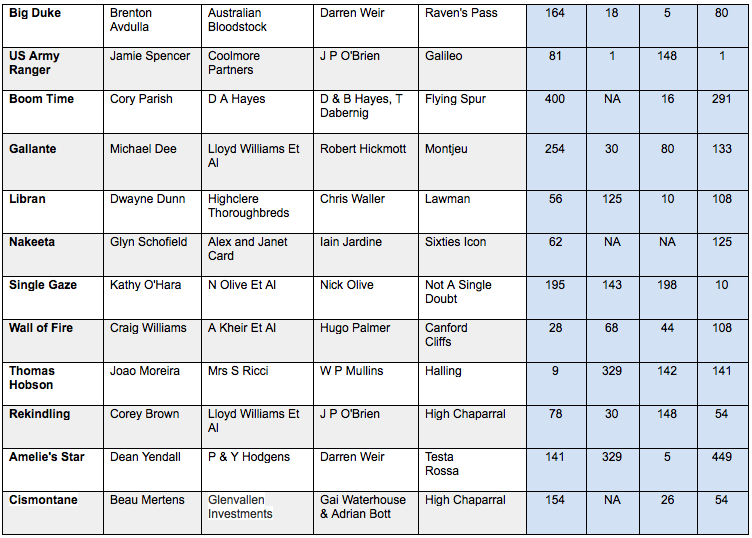 You will notice there is the most variation in the Owner rankings. This is less significant than other categories, according to our research, but something perhaps worth noting at this stage is the variation in Stallion ranks.

The case of world #1 sire Galileo is particularly interesting. The Coolmore great, who has a surprisingly ordinary record down under, is represented by Johannes Vermeer, Bondi Beach and U.S. Army Ranger – all current or former trainees of the great Irish trainer Aidan O’Brien. Not only has Galileo has not sired the Cup winner, but the form figures of his runners in the race since 2011 are 8000000000000. That is, only one of his last 13 runners has finished better than tenth.

After that, the ranks of represented stallions in order are 9, 10, 13, 36 and 40. Humidor is a son of #9 stallion Teofilo, and it is this runner that the rankings point to here, given that they are also bullish on jockey Blake Shinn (#24) and trainer Darren Weir (#5).

Of course, Humidor warmed up for this famously by running a close second to Winx in the G1 Ladbrokes Cox Plate at Moonee Valley, where he kept on strongly. That was a top-class effort, and, if he runs back to it on Tuesday, he will surely go very well. The two-mile trip is a complete unknown, and many observers felt Humidor did not see out even a mile and a half on his penultimate start. Teofilo, though, gets plenty of stayers, and Teofilo, ironically a son of Galileo, has a fine record in Australia. So Humidor is worth a chance.

New Zealand-bred Humidor will become the first horse to compete in all three Melbourne majors (Caulfield Cup, Cox Plate and Melbourne Cup) since 2008.

The Melbourne Cup will be televised live on At The Races in Britain and Ireland, and American race fans can live-stream and wager using ADWs such as TVG, TwinSpires, Xpressbet, NYRA Bets, WatchandWager, HPIbet, AmWager, and BetAmerica. Punters can also pick up free past performances and watch live at Sky Racing World.