Justify may have faced sub-standard rivals in the Triple Crown, Masar was one of just two in the field to appreciate a mile and a half in the  Epsom Derby (and the other, the runner-up, was not really a G1 horse), and one might begin to wonder what calibre of animal Winx is up against as she strolls along in Australia, but some divisions have looked deep this season - none more so than the sprinters.

With them, it’s getting crowded at the top, particularly on the dirt.

Mind Your Biscuits set the ball rolling when he won the G1 Dubai Golden Shaheen for a second time on Dubai World Cup day. Delivering his customary late kick into a furious pace, he got up to beat fellow Americans X Y Jet – who thus became twice runner-up in the race – and Roy H, winner of the G1 Breeders’ Cup Sprint last year. Beating them by a head and three parts of a length, Mind Your Biscuits earned a Globeform (GF) mark of 126 – higher than for any of his previous races - and he went on to rate even higher when failing by just a nose trying to give Bee Jersey four pounds in the G1 Metropolitan Mile an Belmont Park in June.

Now aged five, Mind Your Biscuits is a seriously good sprinter/miler, but he handled nine furlongs well when winning the G3 Lukas Classic at Churchill on September 30 – albeit against rivals well below Breeders Cup standard - and his connections may roll the dice in the Breeders’ Cup Classic. A brave call if they make it, and one that would undoubtedly be welcomed by other contenders for both the BC Sprint and BC Mile in just over two weeks’ time.

Reigning champ Roy H, who had performed to GF 126 when smoothly taking the G2 Palos Verdes in a sharp time at Santa Anita in February, was given a break after Dubai. He resurfaced in the G1 Bing Crosby at Del Mar four months later. As in the 2017 edition, he lost to Ransom The Moon – though this time it was fair and square, as the latter recorded GF 123 to beat him by just over two lengths.

The story was quite different a year earlier, when Roy H was carried out by the riderless Drefong on the turn, lost ground, and saw Ransom The Moon sneak up by the rail.

This year’s Bing Crosby result showed Ransom the Moon is also in the top flight. The BC Sprint will be his final race before he enters stud at Calumet Farm. It will also be yet another run against Roy H, who turned the tables on him when winning the G1 Santa Anita Sprint Championship on October 6 last year. Roy H hammered his in-form barnmate Distinctive B that day (with Ransom The Moon third) and he is coming to the Breeders’ Cup using a path very similar to the one that led him to success last time.

The future book favourite for the BC Sprint, however, is last year’s runner-up, Imperial Hint. His form has also improved this term. After finishing sixth to Limousine Liberal in the G2 Churchill Downs Stakes in May, his first start back since he split Roy H and Mind Your Biscuits at Del Mar last November, he moved forward to beat that rival for a solid win in the in the G2 True North Stakes at Belmont in June.

Seven weeks later, Imperial Hint impressed in the G1 Vanderbilt Handicap at Saratoga, where he was conceding from five to nine pounds all round and won with ridiculous ease. This seemed like either a case of the best horse on the day producing exceptional form, or the likes of exacta filler Warrior’s Club and the third, Sweetontheladies, having run below their true form. In these cases, the answer is often a bit of both.

Those he beat did underperform, but Imperial Hint was hard on the bridle through the last furlong. Top-level sprints are rarely won so comfortably. He had plenty in hand as he passed the winning post 3¾ lengths in front of Warrior’s Club, who had previously beaten Limousine Liberal to win the G3 Commonwealth at Keeneland and lost by just a head against the same rival in the G2 Churchill Downs Stakes. Limousine Liberal went on to land the G2 Belmont Park Sprint Championship, before finishing third to Whitmore (another solid sprinter) in the G1 Forego at Saratoga, where Whitmore beat strong Breeders’ Cup Dirt Mile contender City Of Light and improved hios form to GF 123.

Imperial Hint was himself given the final Breeders’ Cup prep in the G1 Vosburgh at Belmont, where he was so much the best going in to the contest that NYRA decided to make it a no-show race. Imperial Hint went off at 1/5 and won heavily eased. If ridden out, he would have beaten the track record.

Army Mule was another top class U.S. sprinter this season. His stunning win in the G1 Carter Handicap at Aqueduct in April left a lasting impression and was the best performance of the year by a sprinter on both Globeform and Beyer. He powered home by 6¼ lengths from Awesome Slew, and produced GF 130 in the process. Army Mule has just been retired to Hill ‘n’ Dale Farm, which should give connections of the other leading sprinters cause to breathe a sigh of relief.

The older brigade, with or without Mind Your Biscuits, will be formidable when it comes to the championship decider at Churchill Downs on November 3, but they will be challenged by a bunch of talented 3-year-old sprinters, probably headed by Promises Fulfilled, who was such a solid winner of the G1 H Allen Jerkens Stakes at Saratoga in August, and Firenze Fire, who was third in that event after having romped by nine in the G3 Dwyer at Belmont Park in July, and before confirming the form with a gritty win in the G3 Gallant Bob Stakes at Parx in September.

Promises Fulfilled is not the first young sprint talent to have appreciated a drop in trip after getting caught up in the Triple Crown mania.

A front-running win in the G2 Fountain of Youth sent him to the G1 Florida Derby, where he finished last. Onto Churchill Downs, where 14 of his 19 rivals beat him in the first leg of the Triple Crown. Ah well, the track was terrible and he had decent performers behind him. Still, ten furlongs was never to be his game, as the betting public suspected, sending him off at 49/1.

He had run in three tough races by then, but Promised Fulfilled is a bit like his sire, Shackleford, in that he thrives on competition, and he has bounced back. Just over a month after the Kentucky Derby came his first attempt at sprinting. Cutting back to seven panels, he ran third to Still Having Fun in the G2 Woody Stephens after setting a very strong pace. His next task was the G3 Amsterdam, run over half a furlong shorter at Saratoga in late July. This was to be Promises Fulfilled’s breakthrough race. He crushed as good a horse as Engage by over three lengths while carrying two pounds more than the runner-up, who was second by daylight. 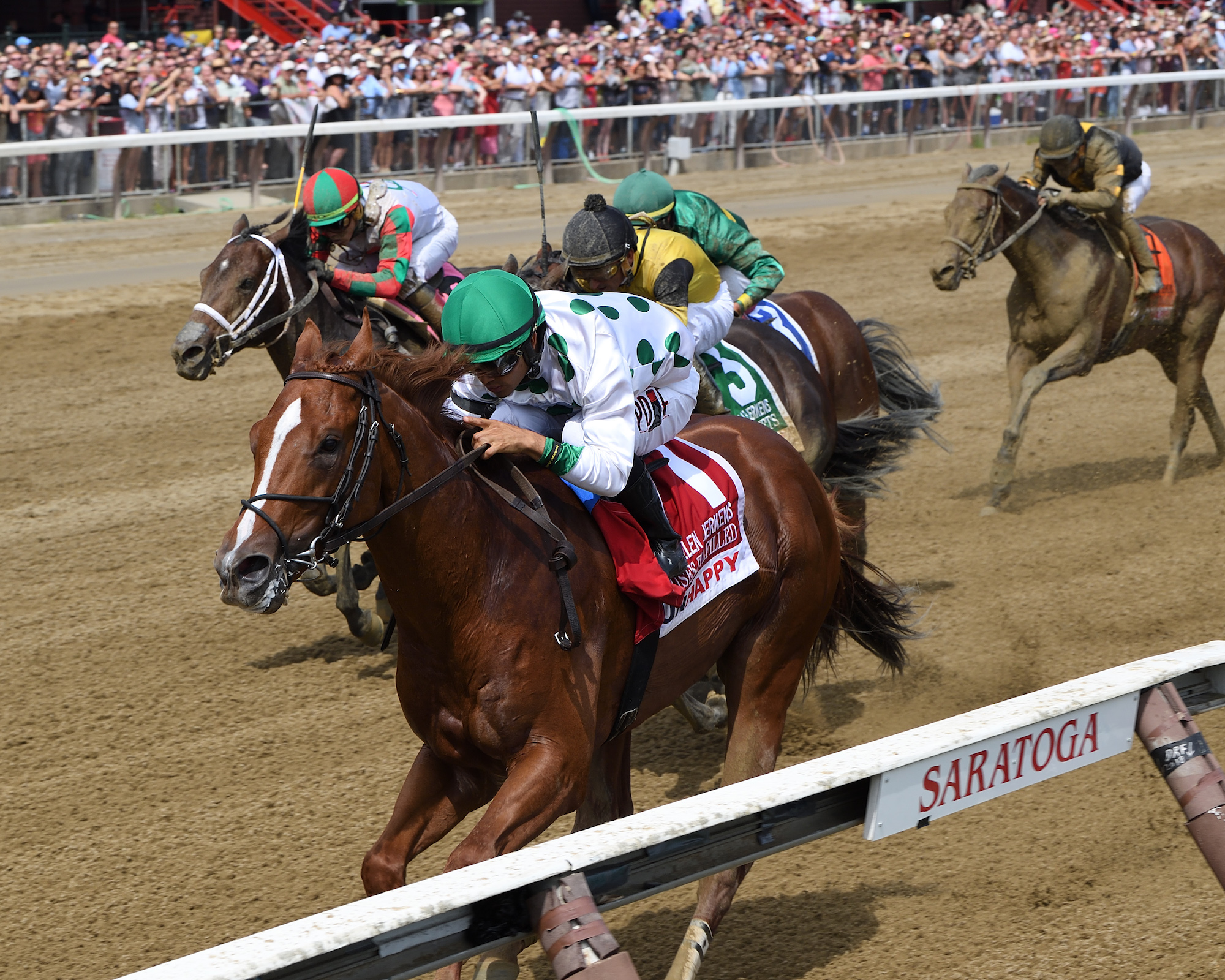 Returning GF 124 – and earning a 108 Beyer, Promises Fulfilled was suddenly on an altogether new level. He followed up in the H Allen Jerkens over the same track a month later, this time stretching his punishing speed to seven furlongs to beat barnmate Seven Trumpets and Firenze Fire. He was once more giving weight to the second, who found the trip too short when going back to six in the G3 Gallant Bob at Parx in September.

Firenze Fire franked the form by winning the Gallant Bob after a dogfight against the progressive Whereshetoldmetogo – a contender coming off three straight wins. Seven Trumpets ran third, while Engage was a well-beaten fourth. Promises Fulfilled also franked his own form, beating Whitmore by hard-fought head in the G2 Phoenix at Keeneland a month before to the Breeders' Cup. At the time of writing, he is a contender for either the BC Sprint or the BC Dirt Mile.

Then there is the Steve Asmussen-trained Mitole, who looked a bit of a freak when winning the listed Chick Lang Stakes on Preakness day at Pimlico. Yes, it was not a Graded stakes, and yes, the track was sloppy, but Mitole won by over six lengths (with a couple more up his sleeve), and note that he clocked a faster time than G3 Maryland Sprint winner Switzerland on the same card, and that his runner-up, Still Having Fun, beat Engage and Promises Fulfilled to take the G2 Woody Stephens next time out.

Mitole is an exciting runner for sure, but he is also one that was sidelined by a splint in early June. Perhaps his is a name to keep in mind for 2019.

So six older horses and three 3-year-olds have earned GF 123 or higher this season. A strong and competitive group indeed, and it would be great to see them all in the starting gate on Breeders’ Cup Saturday.

And don’t be surprised that Army Mule, the horse with such a misleading name, is the top-rated. Beyer speed figures, more useful in dirt sprints than in any other division, gave him 114 for his Carter win. This 4-year-old son of Friesan Fire probably is the real deal.

The best on turf

Weighing the dirt speed merchants against the best turf sprinters around is not easy (nor of great value), but it’s worth noting the ratings achieved by the best sprinters in Europe and Australia this year.

Harry Angel, an impressive winner of the G2 Duke Of York Stakes at York in May, has a Racing Post Rating of 128 and an official BHA mark of 123. His season has fallen apart since that success in May, but he is still rated above G1 July Cup winner U.S. Navy Flag (RPR 122, BHA 119), who flopped on heavy ground behind back-to-back winner Redzel in The Everest at Randwick on Saturday.

Redzel (RPR 126), had prepped with a nice G3 win over the course in September and is clearly as good as ever. As a comparison, the ex-Australian Merchant Navy earned an RPR of 122 when capturing the G1 Diamond Jubilee Stakes at Royal Ascot in June, having been assessed at RPR 115 at his best when racing down under.

How the European turf sprinters stack up – in the grand scheme of things – is open to debate. It’s unlikely that we will be any the wiser after the G1 Champions Sprint on British Champions Day at Ascot on Saturday, when recent G1 Haydock Sprint winner The Tin Man (RPR 121) will be trying to win the race for a second time. He is likely to be up against Harry Angel, and Librisa Breeze, who will be back on the kind of soft ground on which he took the race last season (with an RPR of 121, official rating 119).

Geir Stabell is the founder and editor of globeform.com