Why there's excitement in the air at the Queen's Royal Studs

With promising 3-year-old Light Music among those waiting in the wings for the Queen this season, 2016 has the potential to become one of the most interesting in the history of the Royal Studs.

There has already been cause for celebration at the stud this year through the arrival of a Dubawi foal out of Estimate. The colt is the first foal out of his dam, who provided one of the iconic moments of 2013 when carrying the Queen’s colours to victory in the Ascot Gold Cup.

A particularly tough and talented stayer, the daughter of Monsun was also trained by Sir Michael Stoute to win the Doncaster Cup, Sagaro Stakes and Queen’s Vase.

“Her Majesty has inspected Estimate’s foal,” says her racing advisor John Warren, “and was absolutely thrilled as he is a strong, healthy, correct and attractive individual.”

Given her race record, Estimate naturally owns the potential to become a pivotal mare for the Royal Studs. However, she is also supported by an extremely strong family that descends from Albanilla, also the ancestress of Darshaan; bred by the Aga Khan’s Studs, Estimate is out of Ebaziya and therefore a half-sister to G1 winners Ebadiyla, Enzeli and Edabiya.

In an industry that relies increasingly on Sadler’s Wells and Danehill blood, the fact she is a daughter of Monsun also makes her an interesting mate for a variety of stallions. Similar comments apply to her background, which contains no Northern Dancer – a rarity in today’s era. 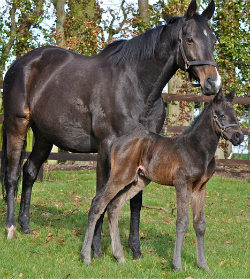 While Estimate (pictured with her foal) is set to return to Dubawi this season, another high-profile resident, top Australian sprinter Sweet Idea, is booked to Galileo.

Sweet Idea joined the stud late last year in a purchase facilitated by the sale of Queen’s homebred Peacock, a Royal winner of the Fairway Stakes in May, to Hong Kong.

Trained by Gai Waterhouse, Sweet Idea was a major flagbearer for Arrowfield Stud’s Snitzel – currently one of the most popular stallions in Australia - as an eight-time winner who banked just over A$2.4 million in prize-money. She enjoyed her finest moment when the wide-margin winner of last season’s G1 Galaxy at Rosehill but was also a multiple G2 winner who ran placed in the G1 Golden Slipper Stakes, G1 Coolmore Classic, G1 Memsie Stakes and G1 Myer Classic.

“The Queen sent Carlton House to race in Australia several years ago and currently has Bold Sniper in training there, so I’ve been a regular visitor down there in recent seasons,” says Warren. “So Sweet Idea was a horse who came to our attention. She ticks all the boxes – she’s a mare of G1 calibre who was a top 2-year-old but also trained on to win at Group level at three and four.

“She also nicks brilliantly with Galileo as a daughter of Snitzel, a grandson of Danehill.”

Sweet Idea’s pedigree also lends itself to another of Europe’s super sires, as Warren explains: “She’s out of a mare by Timber Country and he is from the same Fall Aspen family as Dubai Millennium [sire of Dubawi]. So sending her to Dubawi in the future gives us some quite interesting inbreeding.”

Sweet Idea is out of the G3-placed Flidais, also the dam of listed winner Rush as well as a Snitzel yearling colt who realised A$1.1 million to Dean Hawthorne at last month’s Magic Millions Gold Coast Yearling Sale. Her granddam is G1 winner Electronic.

Thanks to the recent additions of Estimate and Sweet Idea to the broodmare band, it can be argued that the Royal Studs has rarely been in ruder health.  But the stud is also home to Memory, the G2 Cherry Hinton Stakes and G3 Albany Stakes winner, whose first foal, Recorder, looked potentially top class for William Haggas when winning last year’s G3 Acomb Stakes at York.

Unfortunately, the son of Galileo was ruled out of the remainder of last season by injury and continues to remain on the sidelines for now. However, Haggas’ yard does house a potentially exciting 3-year-old for the Queen in the filly Light Music. By Elusive Quality out of listed winner Medley, she broke her maiden by 14 lengths at Leicester and later followed up in the listed Radley Stakes at Newbury, in which she showed a brave attitude to repel another of the Queen’s homebreds, Make Fast, by a neck.

The general consensus following that race was that Light Music didn’t appreciate the prevailing soft ground at Newbury. With that in mind, it wouldn’t be a surprise to see her acquit herself well in good company once she returns to a sound surface this season.