It’s probably stretching it a point to describe the coming week, as some have done, as ‘make or break’ for Aidan O’Brien as far as 2018 is concerned, but there’s no doubt the next few days have the potential to right a ship that set sail on its 2018 voyage so imperiously (remember Saxon Warrior in the Newmarket 2000 Guineas and Mendelssohn in the UAE Derby?) but is floundering now on the rocks of a growing list of mundane efforts from its one-time star performers.

Gustav Klimt’s lacklustre display at Newbury on Saturday and Rhododendron’s unfortunate stumble when placed to challenge in the G1 Prix Jean Romanet at Deauville yesterday (see the video below and judge for yourself how well she might have done) were the latest in a raft of disappointing results as the world’s #1 trainer battles a stubborn mid-term slump, probably attributable to the lingering effects of the virus at his Ballydoyle yard.

This time last season he had already notched 14 G1 victories (on his way to a world record annual total of 28). So far this time, his total is eight - more than anyone else in Europe but two below the score of Winx’s trainer, Chris Waller (world #9), and matched by American Chad Brown (#4). In recent seasons he has set a pace far too fierce for any other conditioner anywhere. O’Brien’s latest top-level successes came all of five weeks ago (Kew Gardens in the Juddmonte Grand Prix de Paris at ParisLongchamp and U.S. Navy Flag in the Darley July Cup at Newmarket), but they have been rare outliers in a sorry catalogue of underperformance.

This is always an important week for Ballydoyle because of the Welcome to Yorkshire Ebor Festival (Wednesday to Saturday), one of the great race meetings of the European season, and there is also much riding on Mendelssohn’s bid for redemption in the $1.25 million G1 Travers Stakes, America’s ‘Midsummer Derby’, over a mile and a quarter at Saratoga on Saturday.

O’Brien’s York team is led by Saxon Warrior, who is up against a mighty field (likely to include Poet’s Word, Cracksman, Roaring Lion and Thunder Snow) in Wednesday’s G1 Juddmonte International, Kew Gardens, favourite for the G2 Great Voltigeur Stakes on the same day, and Oaks winner Forever Together, who is slated for the G1 Darley Yorkshire Oaks on Thursday, again going into bat against a stellar line-up.

The big questions, of course, are just how much is the poor form of so many of the O’Brien runners down to the virus, and will more of them be properly competitive anytime soon.

O’Brien seemed reasonably confident last week. “[The virus] went through the yard. All the horses got it. They seem to be back in good form and we’re looking forward to our next big week, which is York. It will be interesting to see how they get on there.”

One significant issue is that the Ebor Festival is not traditionally one of O’Brien’s strongest weeks in any year. Perhaps it falls between the two stools of the early classic campaigns and the push for the big autumn targets, but it’s not just the trainer who tends to fall slightly shy of his normal stratospheric standards here - none of the Coolmore first team (Coolmore Partners in the owners’ category and Ryan Moore in the jockeys’ section) generally fares as well here as in the TRC Global Rankings overall.

As the table below shows, O’Brien has a strike rate of just 9.1 percent in the Group races at the meeting over the past seven years. His numbers are good enough for third place - behind York specialist William Haggas (world-ranked 38) and Sir Michael Stoute (world #8) - on TRC points measuring overall achievement over that period, it is still notably less efficient than is normally the case with the world leader.

Haggas, with an imposing Ebor Festival Group-race strike rate of 25.9 percent, much the best of any trainer with more than 11 runners over the period, has a powerful York team himself, led by Irish Oaks heroine Sea Of Class, favourite for the G1 Yorkshire Oaks on Thursday. 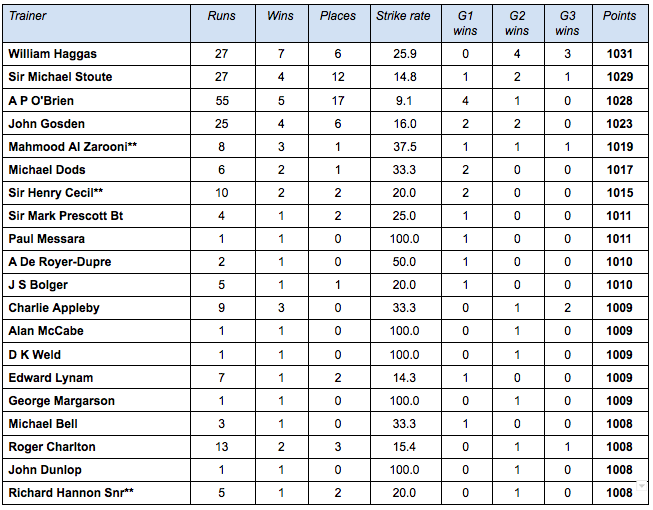 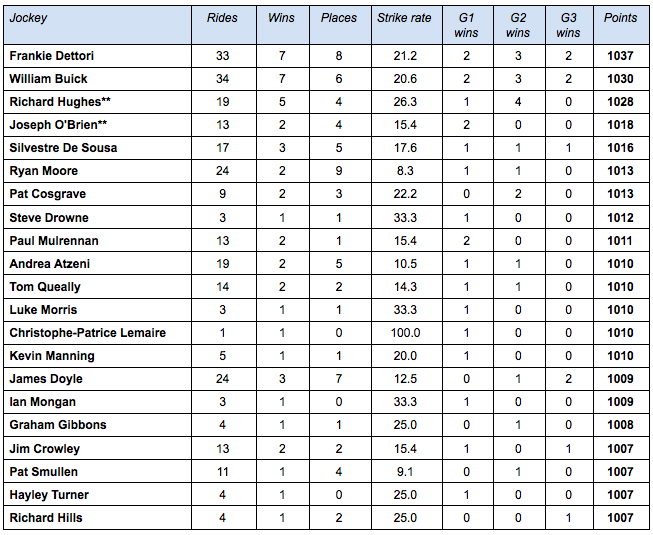 This is one of the few set of stats that does not have Ballydoyle first jockey and longtime world #1 Ryan Moore at the top. The fact that he lies just sixth on this metric, with an unflattering strike rate of just 8.3 percent, goes some way towards illustrating how Ballydoyle has tended to give way here in the past.

Meanwhile world #4 Frankie Dettori and #6 William Buick have been building sturdier accounts, as the table above shows. 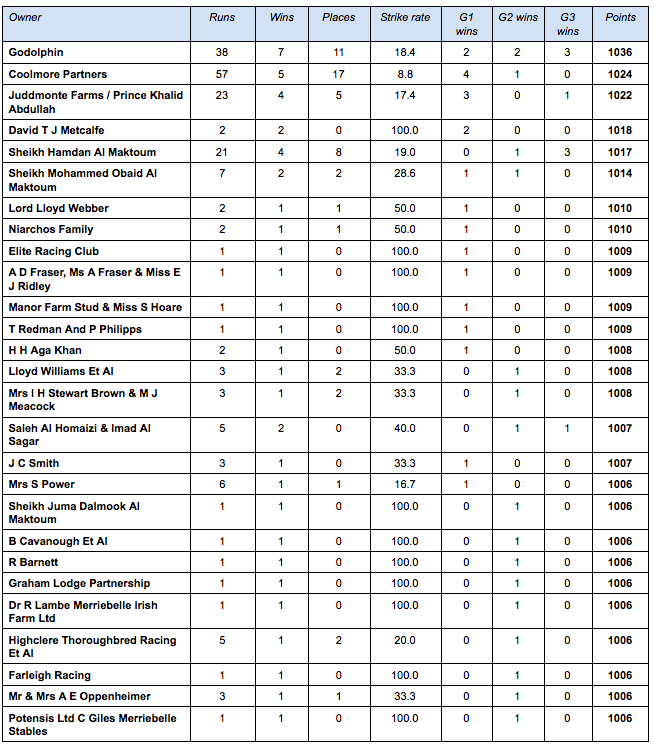 Godolphin have largely been bobbing about in Coolmore’s wake in general competition, but they are clearly the stronger in seven years at the Ebor Festival. The stats for Juddmonte Farms and Sheikh Hamdan are also of note among the bigger operations. 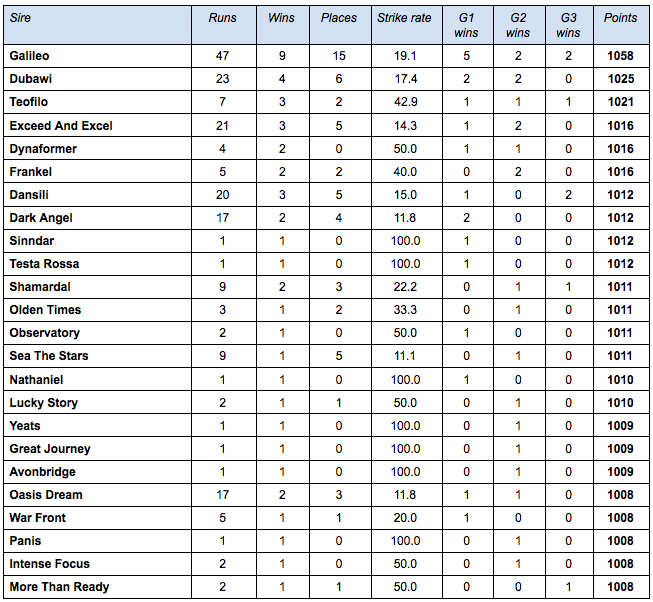 Ah, Galileo! The exception, the one bucking the trend. Coolmore’s world #1 has an even bigger lead over #2 Dubawi in this set of statistics (33 points) than he does at the top of the TRC Global Rankings (nine points). Of course, he is not entirely Ballydoyle-dependent, and his nine winners in this period include Telescope and Mondialiste, and two rather decent Juddmonte International winners - Ulysses and Frankel.