Various explanations have been offered for the speed plateau. The most common explanation is that Thoroughbreds are nearing their physical limits. Some claim the limits are fundamental to equine anatomy. Others say they are only the limits of the narrow gene pool of the breed.

Another explanation is that racing conditions have changed. In 2004, Thoro-Graph’s owner, Jerry Brown, claimed that horses had gotten “ten lengths faster” since 1990, but times didn’t reflect it because tracks had grown slower. Brown claimed that the track at Belmont was an inch deeper, with more sand content, than it had been in the 1970s. Yet the track superintendent at Churchill Downs — where times also hadn’t improved — reported that “we haven’t don’t anything to change the track” in 38 years. I’ve also heard it claimed that today’s horses are given less of a running start before the timer begins.

A less savory explanation for declining performance is the speculation that past generations of horses were given more performance-enhancing drugs. There’s no systematic data on this, but trainers and veterinarians admitted using anabolic steroids and clenbuterol on champion American Thoroughbreds from Northern Dancer in 1964 to Big Brown in 2008.

Several horses with top trainers tested positive for cocaine in 1989, and anabolic steroid use was considered epidemic in 1990.

While the sport is hardly drug-free today, tighter regulation and better testing may have restricted drug use so that modern horses, like modern baseball players, can’t juice up enough to break records set by their forebears.

But there’s one overlooked fact that creates problems for all these explanations. While colts haven’t gotten faster, fillies have.

Let’s start with the Belmont Stakes, which has been run at 1½ miles since 1926. Winning times improved by three seconds between 1926 and 1960, but there’s been little improvement since. On average, Belmont winning times are about a second slower today than in the 1980s, and no horse has come within two seconds of Secretariat’s 1973 record. 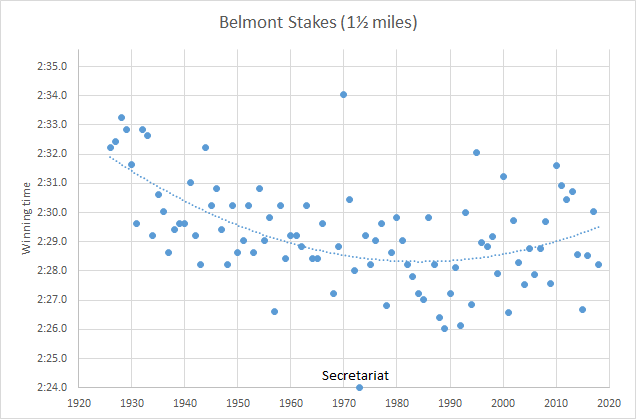 But now look at the Mother Goose Stakes, a G1 fillies race, also run at Belmont, which between 1959 and 2009 was nine furlongs. Average winning times improved by about two seconds over that time.

The filly Ruffian — famously described as  “better than Secretariat” at age two — set a Mother Goose record as a 3-year-old in 1975, about a month before her tragic death. But, unlike Secretariat, Ruffian had her record broken within three years, and matched or beaten six times after that. When Rachel Alexandra broke the Mother Goose record again in 2009, she finished a second and a half (about eight lengths) faster than Ruffian in 1975. 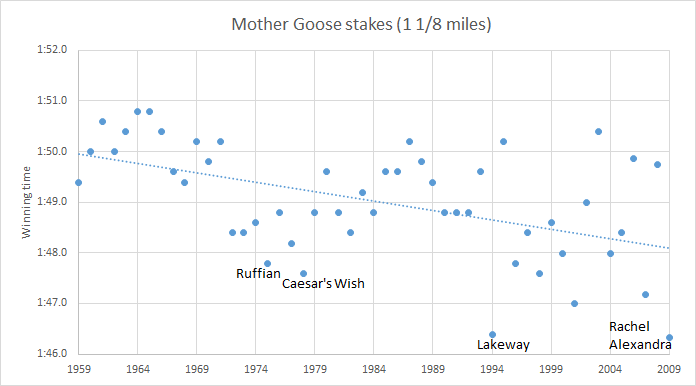 How can we reconcile fillies’ improvement with the excuses that are offered for colts?

Thoroughbred fillies come from the same gene pool as Thoroughbred colts, yet apparently fillies have not yet reached their genetic potential. The Mother Goose is raced at Belmont Park, on the same track as the Belmont Stakes. Yet any changes to the track there — which supposedly have kept colts from improving their times — have not stopped fillies from breaking records again and again.

We don’t really know whether past generations of fillies were as likely to use drugs as colts, but they certainly weren’t clean. In 1990 one breeder estimated that 80 percent of new breeding mares had a history of steroid use. Yet fillies today are faster.

The pattern from Belmont repeats at Churchill Downs. Since 2010, colts’ average winning times in the mile-and-a-quarter Kentucky Derby have been about a second slower than they were when the filly Genuine Risk won the Derby in 1980. Yet in the Kentucky Oaks — a nine-furlong Grade I fillies’ race run on the same track just a day before the Derby — average winning times have improved by a second since 1982. (Before 1982, the Oaks was run at eight and a half furlongs for 40 years.) 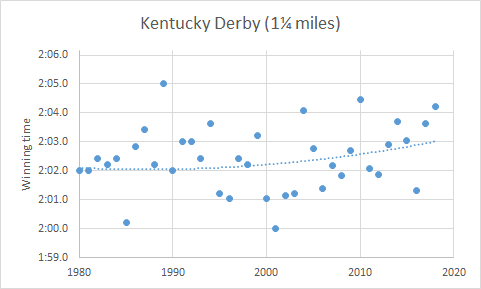 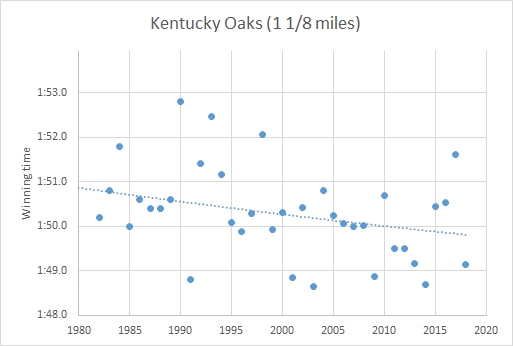 And that ain’t all

Fillies getting faster is not the only problem with the explanations that have been offered for the colts’ plateau.

Another is that colts’ times have only stagnated at distances of a mile and more. Below a mile, nearly all the North American records date to 2005 or later. So some of the traits needed for sprinting — anaerobic metabolism, strong muscles, strong bones — are continuing to improve. If colts are approaching their physiological limits, they’re only limits on aerobic endurance. And fillies don’t seem to be approaching those.

A final problem is that the familiar evidence for stagnation comes from elite U.S. races. A study of thousands of British races found some evidence of improvement over the past 20 years — though again the improvement was only substantial at shorter distances. At longer distances, winning times had barely grown faster, especially in elite races, but non-winning times had improved a bit in less elite races.

Paul von Hippel is an associate professor at the University of Texas, Austin, where he teaches in the LBJ School of Public Affairs and is affiliated with the Department of Statistics and Data Science.