“The past is a different country: they do things differently there.”

The 2015 Belmont Stakes will hopefully have a more upbeat ending than the 1953 novel The Go-Between, but far-distant history still fades into obsolescence in many modern minds.

In assessing American Pharoah's chances of completing the U.S. Triple Crown in the Belmont Stakes on June 6, should we really choose Affirmed's triumph in 1978 as an arbitrary cut-off point? This colt may not be best assessed through the coarse evidence of similarity; he could be a special case, an outlier, the Giancarlo Stanton of horse racing.

A total of 12 Kentucky Derby and Preakness winners have lost in the Belmont since Affirmed, but overall the record of Triple Crown aspirants is much better: from 30* tries, 11 horses have completed the sweep.

(*Note: I have excluded Forward Pass from the sample, because the colt was awarded the 1968 Kentucky Derby following the disqualification of first-past-the-post Dancer's Image after a positive drug test.)

Other than recency bias, potential reasons in favour of dividing Triple Crown history into different regimes are:

If any or all of these are valid, results in the more distant past may not be representative. Let's examine the evidence.

The gradual decline of stamina

There is no need to trawl the evidence once again. This has been done comprehensively in prior articles. In summary, the final time, Beyer Speed Figure, AND relative finishing speed all show a downward trend in the Kentucky Derby, Preakness Stakes, and Belmont. It isn't clear how to interpret this evidence, other than to conclude that U.S. racehorses do not stay as well as before.

There was an injection of stamina after the World War II that provided a boost to running times in two-turn dirt races during the period 1950-1980, but this may be gradually receding according to statistical evidence.

The apparent decline of toughness in the breed

This notion seems to have become a meme of the modern horse racing industry. It is, of course, also a convenient excuse for underperformance. Are racehorses more flimsy than their forebears?

This question has been debated extensively – and equally thoroughly considered by authors. It is true that the average number of starts per year per horse has halved in the last 50 years, but this does not prove that the modern Thoroughbred cannot run more often, only that it has not been required to do so.

The thinking in some quarters is that U.S. Thoroughbred performance is over dependent on medication, thereby resulting in a decline in the ability of prized stallions to produce sound stock. There are also increased commercial imperatives to breed from runners whose own racing careers were abbreviated.

The tendency for Kentucky Derby also-rans to skip the Preakness

This is a theme that aroused the emotions of California Chrome's part-owner Steve Coburn just seconds after the defeat of his colt in last year's Belmont.

“I'm 61 years old, and I will never see another Triple Crown winner because of the way they [skip the Preakness],” he said in a televised interview. Apart from anything else, if American Pharoah does win, this statement should count as one of the worst sporting predictions in history.

Last year, Tonalist did not even run in the first two legs of the Triple Crown. The year before, Derby also-ran Palace Malice skipped the Preakness. However, the worth of analysing this trend through history in a proper statistical framework is highly dubious; the difference between horses missing the Preakness through design and those who were not fit to race clouds the issue.

All three reasons for believing that the task facing U.S. Triple Crown aspirants is different than in the past have some merit, though it is still a dangerous practice to assess an individual with a suite of particular characteristics by a limited sample of others who appear to possess similarity. It is sometimes tantamount to examining bacteria with a telescope not a microscope.

Several failed attempts at the Crown have resulted in near-misses, like that of Smarty Jones in 2004 and, in particular, Real Quiet in 1998. It may well be more problematic than in the past, but American Pharoah may be one of the best horses to attempt the Triple Crown in the Belmont.

This is the most compelling evidence: the final quarter of Triple Crown races is slow, U.S. Thoroughbred pedigrees may have become unbalanced towards speed, but that doesn't mean a phenom cannot buck the trend.

Take Major League Baseball, for instance. Annual average home-run totals show a sharp decline since the so-called steroid era. Then along comes Giancarlo Stanton, who can regularly hit a baseball more than 450 feet and clean out of Dodger Stadium.

In any statistical distribution, it is possible for the average to decline with time but the variance to increase, making the probability of an outlier roughly the same.

Look at the chart of 2013 Belmont winner Palace Malice. These are the split times for each quarter:

A horse who can do what American Pharoah did to the Preakness field can do what Palace Malice did to the Belmont field. The fast-slow shape of modern U.S. classics means that the field may run slower collectively late on, but there is less running at the leader late. The bookies don't pay out based on historical context but on instantaneous achievement.

After winning the Belmont, Palace Malice won the 2014 Met Mile on the same track with splits of:

I very much doubt whether a European Derby winner could drop back to a mile so easily, mainly because a European horse would never win a Derby coming home as slowly as Palace Malice did.

Dirt races are not the same test of stamina as turf races because early and middle pace are not as strongly associated with winning on turf; they are not such strong weapons.

What American Pharoah showed in the Preakness was that he could be geared down after running hard to get the lead. He has tractable speed; he should not lose the Belmont in the early stages like some Triple Crown aspirants have.

It may well be true that the Belmont is more elusive than before, in theory. But so is hitting 475-foot home runs.

After the Kentucky Derby, American Pharoah looked as if he might well be stereotyped adequately as a potential Belmont failure, but he stepped up a lot in the Preakness. Others have done that and failed, but this colt has so much mid-race power than he could stagger home in the Belmont and still win. 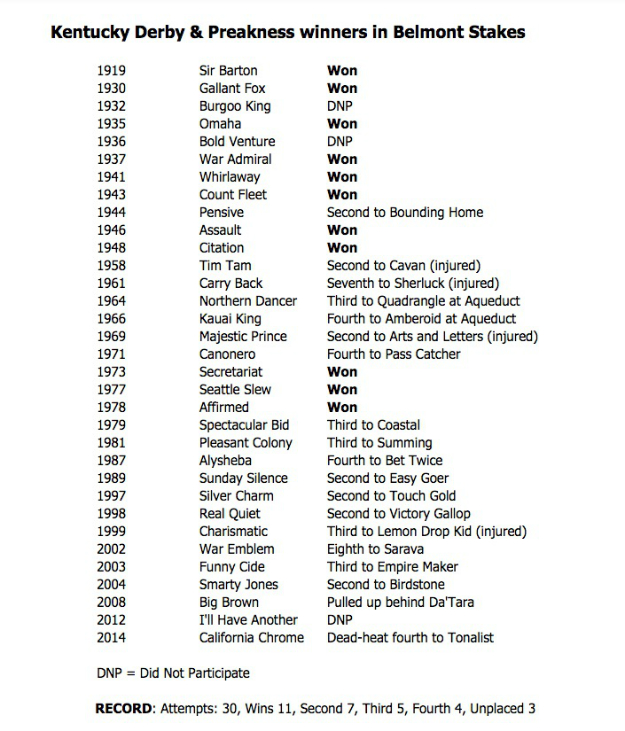