For its 87th running on Aug. 2, the premier race for older horses at Saratoga Race Course has had its name shortened to what most have called it for decades: “The Whitney.”

The race’s purse has also been doubled to a record $1.5 million. The Whitney is worth more than the historic, $1.25 million G1 Travers? Who says things don’t change at Saratoga?

While the race now honors the aristocratic family that was prominent in rescuing and rebuilding America’s oldest track, it was born in 1928 as a memorial to William Payne Whitney, who had died unexpectedly at the age of 51 the previous year. Thanks to the importance of the Saratoga meeting and the support of the Whitneys, it quickly grew into one of the most significant races in the country.

The Whitney, which has been known as the Whitney Stakes, the Whitney Handicap, and the Whitney Invitational Handicap since its inception, has been won a total of 24 times by 20 members of the Hall of Fame; 17 winners earned divisional titles the year they captured the race and seven were named Horse of the Year. Though champions have made their reputations in the Whitney, other stars have met defeat. The most notable upset came in 1973 when Onion stunned a huge crowd that came out to salute the new Triple Crown winner Secretariat.

Martin Panza, the New York Racing Association’s newly installed senior vice president of racing operations, intends to turn the Whitney program into an early season big event like Travers Day. To that end, he increased the purse and changed the conditions from an invitational handicap to a weight-for-age contest with allowance conditions. Panza said that he hopes the big purse will attract top handicap runners from the West Coast to compete in the Breeders’ Cup Challenge Series “Win and You’re In” race.

The substantial bump in the purse did not draw any runners from California this year, but the 1 1/8-mile Whitney does have a strong field led by Metropolitan Handicap winner Palace Malice and multiple G1 winner Will Take Charge.

It is impossible to overstate how three generations of the Whitney family have played major roles on the success of Saratoga Race Course. The most consequential, by far, was the patriarch, William Collins Whitney, who led the group of investors that purchased the track from the notorious bookmaker Gottfried Walbaum after the 1900 season. In its Nov. 2 report of the pending sale, the New York Times wrote, “with a change of management the Saratoga track, in all probability, will be restored to the prominence it had in former years in racing affairs.” 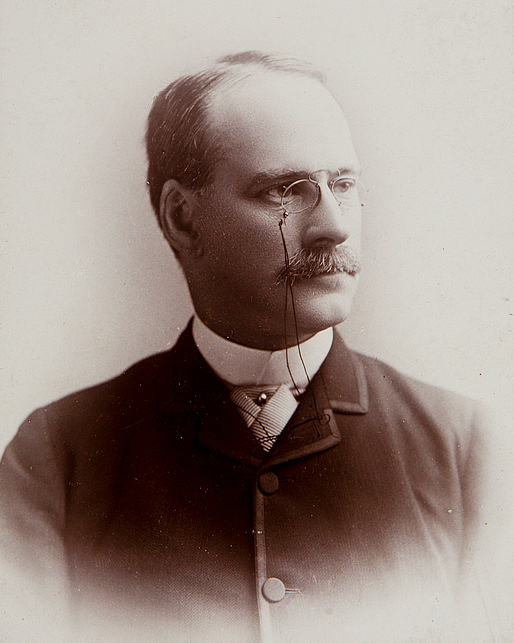 During the decade that Walbaum owned the track, the quality of racing had declined dramatically. There were widespread allegations of race-fixing by management, major stakes such as the Travers and the G1 Alabama were not scheduled, and the track was closed in 1896 in a dispute over dates with The Jockey Club. Walbaum angered Saratoga Springs residents and merchants when he loosened the rules allowing women and children at the track, fostered a lower-level gambling element, and moved post time later in the day.

Whitney, a prominent and wealthy New York lawyer, businessman, investor, and politician - he was the Secretary of the Navy during President Grover Cleveland’s first term - had gotten involved in breeding and racing in the 1890s. At the time Whitney bought Saratoga, he was developing a powerful stable with his oldest son, Harry Payne Whitney, that was producing significant results. The Saratoga Association formed by William Collins Whitney made the track respectable again and set in place a plan to spend approximately $1 million to rebuild and expand the facility. The new Saratoga Race Course opened in 1902 with the track turned 30 degrees away from the setting sun and an expanded dirt oval (from a mile to a 1 1/8 miles) surrounding a turf course.

“W.C. Whitney is the second-most important person in the history of racing in Saratoga,” said Allan Carter, the historian at the National Museum of Racing and Hall of Fame. “The only one ahead of him is John Morrissey.”

It was Morrissey's brilliant idea to hold the first race meeting in Saratoga in 1863.

William Collins Whitney died at the age of 62 in February 1904 after an operation for appendicitis. The savior of Saratoga Race Course was gone, but his good work had made the track a showpiece again and he left the association in good hands. Harry Payne Whitney inherited a reported $24 million from his father’s massive estate and purchased the racing stable. He acquired the top sire Hamburg and among the 16 females he bought were Tanya, who became the first filly to win the Belmont Stakes, and Artful, who was elected to the Hall of Fame.

Harry Payne Whitney was married to sculptress Gertrude Vanderbilt, the great- granddaughter of Cornelius Vanderbilt, who made his vast fortune in shipping and the railroads. Harry Whitney became a prominent sportsman and horseman and was the leading owner several times. 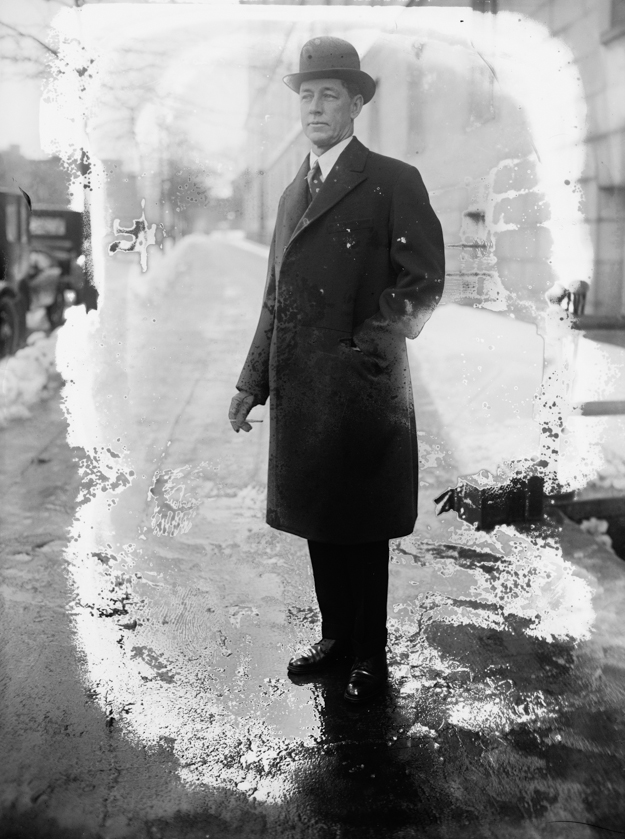 Meanwhile his brother, William Payne, who was known as Payne, had married Helen Hay, whose father, John Milton Hay, had been an assistant to Abraham Lincoln, the U.S. Secretary of State, and an ambassador to Great Britain. Payne and Helen Hay Whitney formed the Greentree Stable in 1914 that initially had success with steeplechase horses before moving into flat racing. Greentree built a beautiful training center in Saratoga adjacent to the track. Helen Hay Whitney was more closely associated with the operation of Greentee and she stayed active in the sport until her death in 1944. Payne Whitney was involved in Greentree’s breeding program, though he was best known as a businessman and one wealthiest Americans after inheriting a large portion of his uncle Oliver Hazard Payne’s fortune.

The Whitney family was so deeply invested in Saratoga racing and so influential in the track’s success, that the addition of the Whitney Stakes after Payne Whitney’s death made perfect sense. The inaugural running was won by the 5-year-old mare Black Maria, who defeated three males, including Harry Payne Whitney’s 1927 Kentucky Derby winner Whiskery, and earned $6,500. The 1929 Whitney was won by another female, Bateau. Harry Payne Whitney’s 3-year-old Whichone captured the 1930 running of the Whitney a few days before he and Triple Crown winner Gallant Fox were defeated by 100-to-1 long shot Jim Dandy in the Travers.

Harry Payne Whitney died in October 1930, and his racing operation was passed on to his son, Cornelius Vanderbilt “Sonny” Whitney, who had not been involved in the sport. Members of The Jockey Club urged Sonny Whitney to continue what his grandfather and father had started and not sell off the stable. Whitney heeded the advice and blossomed into a towering figure in racing and a Saratoga stalwart. He won the Whitney Stakes four times with his own runners - Equipoise (1932); Counterpoint (1952); State Dinner (1980); and Silver Buck (1982) - over a span of 50 years. Whitney sold his bloodstock and retired from racing when he was 85. He died eight years later in December 1992.

A century after his death, William Collins Whitney certainly hasn’t been forgotten in Saratoga Springs, where health, history, and horses are part of the culture. On Saturday, after the running of the 87th edition of the race, Sonny Whitney’s widow, Marylou, will present the trophy to the winner. 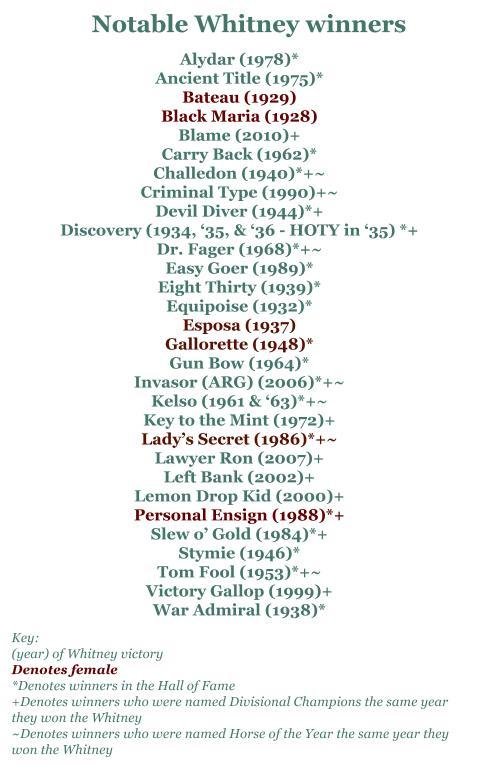