It’s a week British racing takes a deep breath and relaxes. After the intensity of the classic campaigns and the pomp of Royal Ascot, the Qatar Goodwood Festival - ‘Glorious Goodwood’ - brings a change of pace to the top level of the sport. Sure, the action is spectacular and many of the top horses are there, but this is all a little more fun, a bit like being on holiday.

Even before Qatar’s huge prize money injection elevated the meeting still higher among the world’s great racing festivals, the Group races at Goodwood were renowned for attracting some of the best runners in Europe. Frankel won back-to-back renewals of the G1 Qatar Sussex Stakes - now worth £1 million - and giants like Kingman, Giant’s Causeway, Rock Of Gibraltar, Yeats, Double Trigger, Midday and Minding have lit up proceedings over recent years.

So which jockeys and trainers have been the most effective? And which sires have had the most success?

With 13 Group races taking place over the five days (Tuesday - Saturday) and a database now stretching back seven years, there is plenty of evidence for the TRC Global Rankings algorithm to go on. The algorithm measures effectiveness not by totting up prize money but by taking into account the merit of every performance in every Group race.

The tables below include all individuals with 950 points or more.

For the record, the 13 Group races are:

The big names are all there. Former champion Richard Hughes is now retired, but of the other nine include eight of the top 14 in the TRC rankings for jockeys with Great Britain as their Modal Country. The exception is Frankel’s rider, Tom Queally. 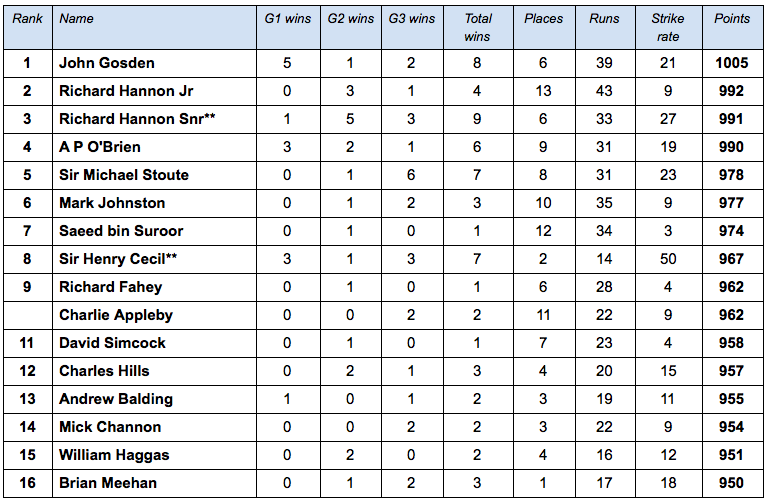 Richard Hannon, whose yard is as renowned for its Goodwood record now as it was when it was run by his father, is second only to world #5 John Gosden, whose five G1 winners at the festival over the period include 2017 Goodwood Cup hero Stadivarius, who will be defending his crown on Tuesday and, perhaps more significantly, bidding to win the second leg of the new Weatherbys Hamilton Stayers’ Million.

Stradivarius has already won the first leg, the Gold Cup at Royal Ascot. Should the son of Sea The Stars win on Tuesday and follow up in the Lonsdale Cup at the York Ebor Festival next month, his connections will win a £1 million bonus. 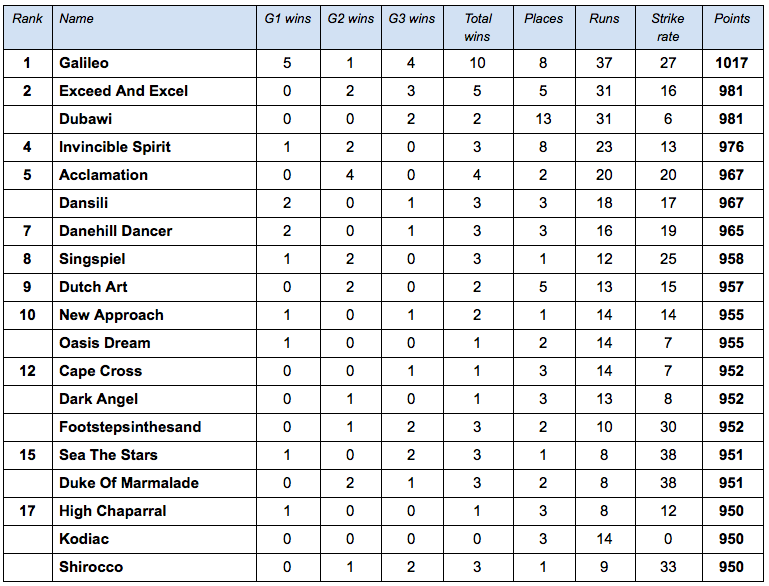 With ten winners, including five in G1s (two of them by Frankel, of course), longtime world #1 Galileo is out on his own. He has a total of 18 wins and places over the seven seasons, three more than world #2 Dubawi, who has 13 places but just two G3 wins to his name.