Who can stop California Chrome clinching the U.S. Triple Crown in Saturday’s Belmont Stakes? If there is such an animal, the clue could be in its pedigree. Having explored California Chrome’s pedigree last week, breeding analyst Nancy Sexton assesses the bloodlines of the projected opposition to see which contenders could be best suited to the test.

One of the most dependable sources of Triple Crown runners in recent years has been A.P. Indy, himself winner of the 1992 Belmont Stakes.

A.P. Indy sired the 2007 winner of the race, Rags to Riches, as well as a pair of placed colts in Aptitude and A P Valentine. Fittingly, the Lane’s End pensioner holds the aces in this year’s renewal, with his sire line responsible for six of the 12 possibles including California Chrome. Another representative, Commissioner, hails from A.P. Indy’s final crop of 36.

A.P. Indy’s influence reigns in a field where plenty of colts own contradictory pedigrees. Several, including Commissioner, are seemingly bred for the job, but for others it will be a case of drawing upon the influences of their past ancestors if they are to beat California Chrome.

Commanding Curve hails from the last of three crops sired by the A.P. Indy stallion Master Command, a G2 winner over 9f whose top runner to date has been the Hollywood Derby winner Unbridled Command.

On the other hand, Commanding Curve is out of a sprint winner by the Storm Cat stallion Lion Hearted, himself G2-placed over 7f. He is also a half-brother to Hot Roots, a stakes-placed sprinter who won over a mile.

Commanding Curve is at least inbred 5x5 to Classic influence Buckpasser and 4x4x5 to Secretariat. Judging by his runner-up effort in the Kentucky Derby, those elements may well be complementing the presence of A.P. Indy and Master Command. 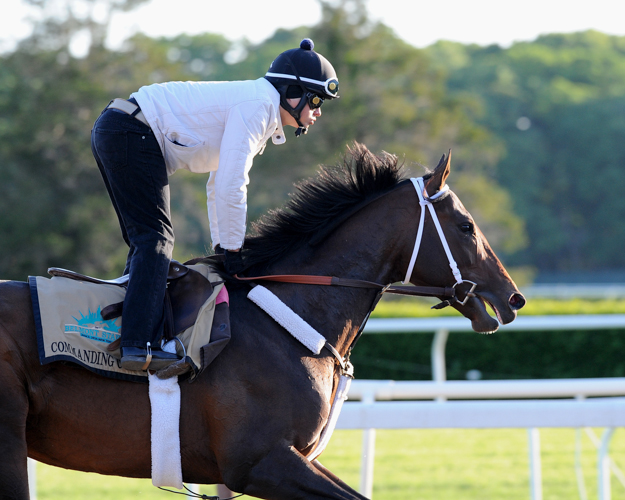 Bred on the same A.P. Indy - Deputy Minister cross as 2007 Belmont Stakes heroine Rags to Riches, Commissioner is out of a minor stakes-winning miler by Touch Gold, whose final powerful swoop in the 1997 Belmont Stakes was enough to rob Silver Charm of the Triple Crown.

So, although Commissioner is a half-brother to Breeders’ Cup Sprint runner-up Laugh Track, there are enough pointers in his pedigree to suggest he has a fair shot of lasting home.

Kid Cruz is the second foal out of the unraced Layreebelle, whose first is this season’s La Canada Stakes (1 1/16 miles) winner Spellbound.

Although a daughter of high-class sprinter Tale of the Cat, Layreebelle is a half-sister to Magical Illusion, who ran third in the 2004 Coaching Club American Oaks at Saratoga Race Course.

Any assistance that Kid Cruz receives from his female family will be enhanced by Lemon Drop Kid. The son of Kingmambo won the 1999 Belmont Stakes and has since become a respected source of quality stayers; for instance, representatives Richard’s Kid, Juniper Pass and Bronze Cannon have each won Graded stakes over 12f or beyond.

Matterhorn is bidding to extend the excellent run of Tapit, a grandson of 1992 Belmont Stakes winner A.P. Indy who has sired eight Graded stakes winners so far this year. Leading earners by the Wood Memorial winner include Careless Jewel, Constitution, and Untapable - G1 winners over 9f to 10f.

Matterhorn is a three-parts brother to British Columbia Derby (9f) winner Title Contender (by Pulpit) and out of a mare by multiple champion Argentinean/Chilean sire Roy. Roy, by Fappiano (to whom Matterhorn is inbred 4x3), sired several G1 winners over 12f or beyond, including Bartola and Badajo.

However, tempering enthusiasm is the fact his dam, the G1-placed Winter Garden, wasn’t one of them, instead finding her forte over 6f to a mile.

Another member of the A.P. Indy sire line, Matuszak bids to go one better than Bernardini’s first Belmont Stakes runner Stay Thirsty, who ran second to Ruler On Ice in 2011.

While Matuszak is a brother to stakes-placed sprinter Golden Triumph and out of a mare, G3 winner Golden Sonata, who was best at around a mile, encouragement can be taken from his further family; his third dam, Delaware Handicap runner-up Pass A Glance, is also the ancestress of French Derby winner Hernando and Prix Lupin winner Johann Quatz.

Matuszak is also inbred to Buckpasser.

Medal Count is a half-brother to Debutante Stakes (6f) winner Garden District and out of a winning G3-placed sprinter. But such has been the influence of Dynaformer as a Classic source that it is not unreasonable to believe that he can improve over 12f.

Brisquette, also the dam of winners over 5f to a mile, is out of 1984 Oak Leaf Stakes runner-up Pirate’s Glow, whose sire, Pirate’s Bounty, was the damsire of 2008 Belmont Stakes winner Da’Tara.

Ride On Curlin shares his sire with last year’s winner Palace Malice. In victory, he avenged the Belmont Stakes defeat of Curlin, who fell a head short of Rags to Riches in 2007.

However, while Palace Malice is out of a mare by strong stamina influence Royal Anthem, Ride On Curlin is a brother to a 6f winner and out of a sprint winner who ran second in the Adirondack Stakes over 6.5f.

In turn, Magical Ride is a Storm Cat daughter of Test Stakes winner Victory Ride, placing further pressure on the need for Curlin’s influence to dominate.

The best runner sired by Florida Derby runner-up Noble Causeway, Samraat is out of 8.5f winner Little Indian Girl, a half-sister to Mother Goose Stakes heroine Nonsuch Bay. The daughter of Indian Charlie has been an excellent mare for connections as the dam of four stakes performers, including the G3-placed Screen Legend, although none have won beyond 8.5f.

On paper, it seems as if 12f might be out of reach for Samraat, but supporters can glean some encouragement from the fact that Noble Causeway’s sire, Giant’s Causeway, is capable of siring talented stayers, as the likes of Ascot Gold Cup winner Rite of Passage show.

Should Social Inclusion line up, he will bid to emulate his grandsire Empire Maker, who ended Funny Cide’s Triple Crown hopes in the 2003 renewal of the race.

Providing further encouragement is Saint Ballado, sire of Saint Liam and Ashado among others. However, while Saint Bernadette was G2-placed over 8.5f, she won over 6.5f and her other winners have been successful over 5f to a mile. Social Inclusion’s early speed will have be harnessed, at least to a degree, if he is to get home.

Dam Settling Mist broke her maiden over 9f by 14 ¼ lengths. She is out of Toll Fee, the granddam of top fillies Havre De Grace and Riskaverse who is also a half-sister to Florida Derby and Wood Memorial hero Plugged Nickle. They are out of 1991 Broodmare of the Year Toll Booth.

Hard Spun was a versatile performer, running fourth in the 2007 Belmont Stakes after filling the places in the Kentucky Derby and Preakness Stakes. He later cut back to 7f to take the King’s Bishop Stakes.

Wicked Strong is the first major winner out of a mare by Charismatic, who broke down in third when attempting to sweep the Triple Crown in the 1999 Belmont Stakes.

Dam Moyne Abbey won over 1 1/16 miles and although a half-sister to a G3-winning miler in Gulch Approval, is from the further family of Pacific Classic winner Student Council.

Freshened up since his fourth in the Kentucky Derby, it wouldn’t be a major surprise to see Wicked Strong finishing well at the business end of the Belmont Stakes.

Click here for Belmont Park training footage of some of the aforementioned contenders.