He’s up to second on the U.S. all-time money list after his awesome victory in yesterday’s Pegasus World Cup Invitational, but that’s only part of the story. The $7 million winner’s check at Gulfstream Park means Gun Runner finishes his career at number four on world all-time earnings list.

The son of Candy Ride climbs 12 places from #16. He edges out Kitasan Black, Japan’s Horse of the Year for 2016 and 2017, who had moved up to fourth after he too ended his racecourse career with a major triumph - winning a first prize of close on $3 million in the Arima Kinen at the end of December.

Indeed it’s been a good few weeks for big earners closing out their time on the track on a high. Alongside Gun Runner and Kitasan Black, we can add Irish star Highland Reel, who bowed out with victory worth in excess of $1.5 million in the Hong Kong Vase earlier last month. That put the now Coolmore stallion up to 12th in the world all-time list, although he has dropped one place this weekend after Gun Runner’s mighty rise.

Gun Runner is behind not only all-time leader Arrogate but also the Japanese pair Gentildonna and Orfevre. All three supplemented their domestic earnings significantly with successes abroad. Gun Runner’s total also includes around $2.3 million for finishing second in last year’s Dubai World Cup. 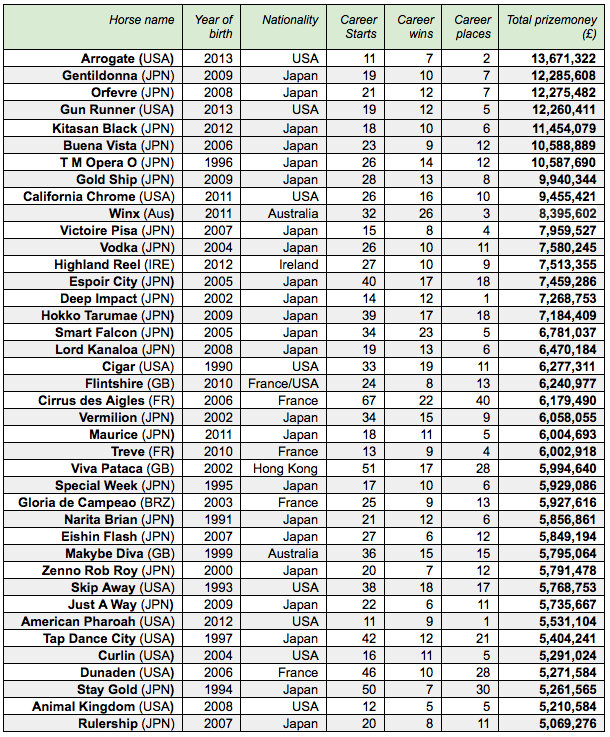 It should be noted that the standings most Americans will be familiar with - the one compiled by Equibase - include only horses that raced in North America even if it was just once, whereas the TRC list includes all horses worldwide (and is therefore - Arrogate and Gun Runner apart - dominated by Japanese). As an example, Espoir City, who was winning valuable races on the dirt in Japan until he was eight, is fourth on the Equibase list by virtue of a single run down the field behind Blame in the 2010 Breeders’ Cup Classic at Churchill Downs. He ranks 14th on our world list, but we would not include him in North American standings.