They may seem to have been largely obscured by Coolmore’s still-lengthening shadow for so long that it’s easy to dismiss Godolphin as relative makeweights when it comes to racing at the highest level. To do that, however, would mean you have taken your eye off the ball.

Despite the complications surrounding the departures of John Ferguson in Europe and John O’Shea and Henry Plumptre in Australia, 2017 has been a year of satisfying success for Sheikh Mohammed’s operation.

You have to go back to the days of Daylami, Dubai Millennium and Kayf Tara to find a year of equivalent achievement. Those giants of the turf helped Godolphin to a grand total of 18 G1 victories in 1999. They’ve equalled that already in 2017.

Their stats for the year make impressive reading. As of Sunday, this was the worldwide picture: 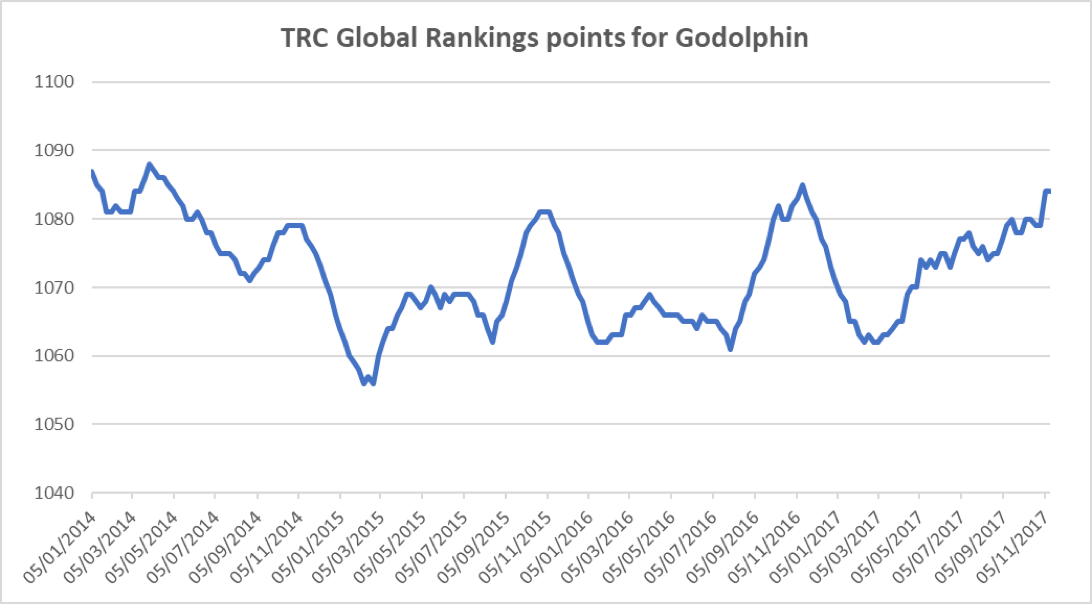 Of course, they are well adrift of Coolmore Partners in the world owners’ rankings, but the best of the rest are a respectful, unthreatening distance behind them. What’s more, those 18 G1 victories contain evidence of far rosier prospects for the future than has perhaps been the case in many previous years. As the graph here illustrates, the second half of the year has been one of impressive progression. TRC Global Rankings measures effectiveness in all Group and Graded races across the world, and Godolphin have built up their points total from 1071 at the start of 2017 to 1084 now. That is just four off their high of 1088, achieved in March 2014, when they were ranked number one in the world. They were last in the top spot in June last year. It has been all Coolmore since then.

It’s easy to underestimate the Godolphin G1 tally after Aidan O’Brien has conditioned us to think in terms of 27 G1s and beyond for a 12-month period. But, make no mistake, 18 is an awesome total. 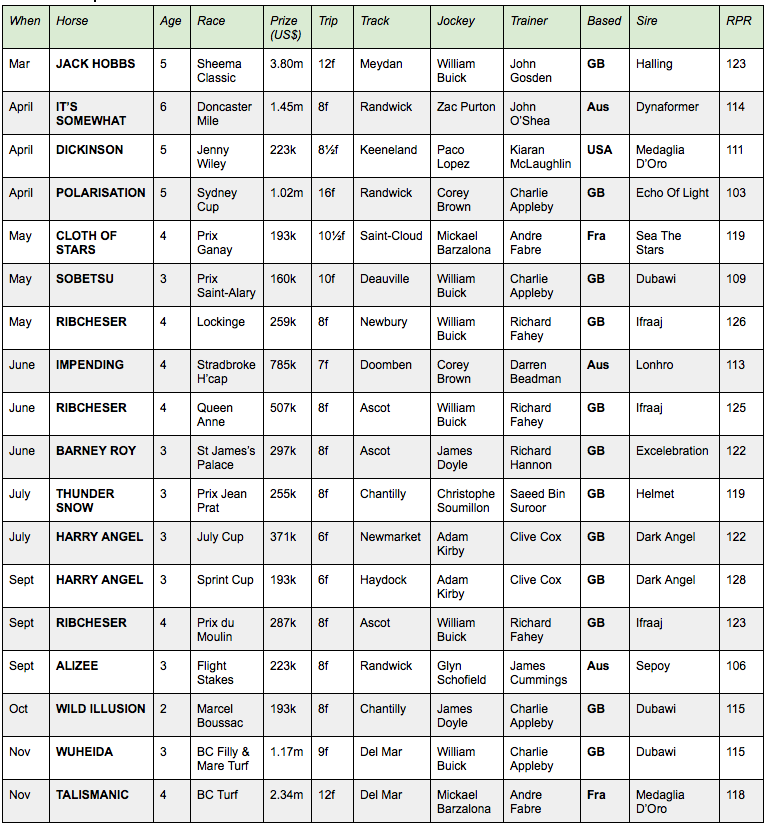 The most successful individuals at this level have been:

*James Cummings has been Godolphin’s head Australian trainer since July, when he took over from Darren Beadman, who had been temporary charge after the departure two months earlier of John O’Shea.

Countries (where the winners are trained)

Countries (where the races have been won)

The list contains not only the highest rated sprinter in the world, Harry Angel, who is due to stay in training next year, but exciting prospects like Wild Illusion and Alizee. And it is worth noting that Godolphin’s list of top-rated runners over the year compares favourably with Coolmore’s:

Godolphin were also champion owners in Britain for the third straight year (and the 12th time overall), although that owes a not inconsiderable debt to traditional naming conventions, as the British Horseracing Authority table below illustrates. (Add together the prize money totals listed in 2nd, 5th and 6th places and the chart takes on a slightly different complexion. As readers will no doubt be aware, TRC Global Rankings groups them together as 'Coolmore Partners'.)

The table shows the BHA's end-of-season stats after October 21 (British Champions Day) on which the champion owner title is awarded (based on prize money).