It looks like a case of ‘where and when’ he does it rather than ‘if’ as Aidan O’Brien seemingly accelerates towards Bobby Frankel’s world record of 25 G1 wins in a calendar year.

O’Brien, the world’s top-ranked trainer, needs just two more G1s to draw level with Frankel’s mark, set in 2003, having taken one last week with Roly Poly at Newmarket, and four the week before - with U.S. Navy Flag and Clemmie at Newmarket, and Happily and Rhododendron at Chantilly.

Newmarket now takes centre stage once more as O’Brien saddles three runners in the G1 Fillies’ Mile tomorrow and four in the G1 Dewhurst Stakes on Saturday. O’Brien has won the last three runnings of the Fillies’ Mile, and must be a very short price to make it four this time with the first three in the betting (including Chantilly winner Happily) giving him an apparent stranglehold on the contest.

His chances in the Dewhurst are much slimmer, however. His two shortest-priced contenders, Seahenge and the reappearing U.S. Navy Flag, are available at around 10/1, with three from other stables preferred, including the unbeaten odds-on favourite Expert Eye, trained by Sir Michael Stoute (world-ranked 11) and yet another potential star from Juddmonte.

O’Brien has won three of the last four runnings of the Dewhurst, two of them with sons of War Front, who is enjoying a fine run at the moment and is up to #7 in the latest world sires’ rankings, thanks in no small part to Roly Poly’s win in the Sun Chariot Stakes last Saturday. Two of O’Brien’s Dewhurst runners on Saturday are by War Front (U.S. Navy Flag and Threeandfourpence).

Could he get to the record in Canada?

Then it’s on to Toronto as the master of Ballydoyle targets two G1s on the turf at Woodbine on Sunday - the $800,000 Pattison Canadian International over a mile and a half and the $500,000 E.P. Taylor Stakes for fillies and mares over a mile and a quarter.

Woodbine announced late on Tuesday that O’Brien will be represented by Rain Goddess in the E.P. Taylor and Idaho in the International. Both horses disappointed on their previous visits to North America.

Idaho, a full brother to world-travelling multi-millionaire Highland Reel, has enjoyed a mixed 4-year-old campaign. He won the prestigious G2 Hardwicke Stakes at Royal Ascot (with fellow International contender Chemical Charge in third) and was a respectable third behind Enable in the King George on softish ground at Ascot in July. But he was a lacklustre sixth when sent off favourite for the G1 Sword Dancer at Saratoga before finishing eighth on soft ground in the Arc at Chantilly (again behind Enable) after making most of the running.

The son of Galileo has failed to make an impact in either of his two runs in North America - he was a close, but never dangerous fifth behind Erupt in last year’s Canadian International. Erupt is back to defend on Sunday.

Rain Goddess, also by Galileo, finished a disappointing eighth to Dacita in August in the G1 Beverly D Stakes on the Arlington Million undercard.

Of course, the odds are that O’Brien will get at least one G1 victory this weekend, possibly two. Indeed, such is the rate of his success over the year so far that if he doesn’t win at least one G1 every week he could actually lose rankings points.

As you can see in the chart here of the likely starters in the International, Idaho’s connections are out on their own in terms of world rankings, and the 4-year-old is well clear on Racing Post Ratings best on his best form. 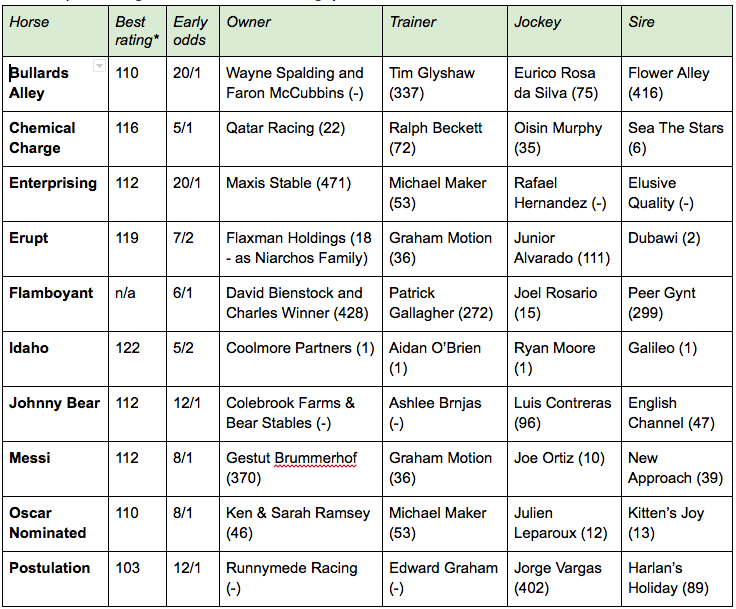 *Best rating is the highest Racing Post Rating the horse has achieved so far.

But there are other contenders whose connections have impressive world rankings credentials, including Chemical Charge, Erupt, Oscar Nominated and Messi.

The latter pair are the mounts of significant climbers Julien Leparoux and Jose Ortiz respectively. Both riders took two Graded victories last week. Leparoux is up two places to joint #12 in the jockeys’ standings as a result, and Ortiz strengthens his position as world #10.

If O’Brien doesn’t get there this weekend, it will be back to Ascot the following Saturday, when some of his most formidable horses are due to run in British Champions Day.

First wave of Europeans fly in

The first wave of Europeans, including Chemical Charge, checked in on Tuesday morning after a flight from Amsterdam that had been delayed by three hours.

Joining Chemical Charge were Nezwaah and Blond Me, both running in the E.P. Taylor, and Cotai Glory, who goes for the G2 Nearctic.

Chemical Change comes to Woodbine off back-to-back victories, the most recent in a G3 race over 1½ miles on the Polytrack at Kempton Park. “He looks well,” said Lindsey Metcalfe, from trainer Ralph Beckett’s stable, who accompanied Chemical Charge on his trip along with exercise rider Joao Cardoso. “He’s tired, like the rest of us.” Oisin Murphy rides.

Nezwaah raced in the E.P. Taylor last year at three, finishing seventh but beaten just two lengths, and returns an improved performer with two wins, including her first G1 - beating Rain Goddess into second in the Pretty Polly at the Curragh for trainer Roger Varian.

In her last appearance, Nezwaah finished fourth behind Enable in the Darley Yorkshire Oaks.

“She shipped over good; we’re happy with her,” said the stable’s Wayne Tanner, who accompanied Nezwaah, along with groom Petra Moravkova. “She was coming here or to Belmont [for last weekend’s Flower Bowl]. We weighed the options.”

Regular rider Andrea Atzeni will be aboard Nezwaah.

Blond Me, a 5-year-old, is trained by Andrew Balding, who won a Canadian International with Phoenix Reach in 2003. Her best races this year include a G2 win at York and a second behind dual Guineas winner Winter in Goodwood’s G1 Nassau.

A subsequent start in the G1 Prix Vermeille at Chantilly, is best ignored, according to handler Leanne Masterton, who accompanied Blond Me along with Chris Hannaford. “She was hampered badly, and he [jockey Oisin Murphy] pulled her up,” said Masterton. Murphy will be back in the irons for the E.P. Taylor.

“This race has been the plan,” said Masterton.

Rainha da Bateria, who has shown a fondness for the Woodbine turf course, will be trying to improve on last year’s fifth for trainer Chad Brown when she makes a return appearance in the E.P. Taylor.

The race is expected to attract a field of nine. Others confirmed include the Graham Motion-conditioned Quidura, who captured the G2 Canadian Stakes in her last start on September 16, and a second Brown trainee in Fourstar Crook, winner of four New York-bred stakes plus the G3 Dr. James Penny Memorial at Parx Racing.

Rainha da Bateria was victorious in her Woodbine debut, defeating her more fancied stablemate Dacita by a nose in the 2016 edition of the Canadian, and returned four weeks later to finish just 1¼ lengths behind the winner in the E.P. Taylor.

This year, her lone win in three starts came at Woodbine in the G2 Dance Smartly, a 1¼-mile race in which she dead-heated for the top spot with Starship Jubilee.

Rainha da Bateria last saw action at Arlington Park on August 12, coming from well off the pace to finish fourth just 1¾ lengths behind Dacita in the Beverly D over a mile and three sixteenths. “She was too far back, unfortunately,” said Brown. “It was a lot to do, but she did run well.”

Brown also believes the nine-week gap will be beneficial. “I think she runs well fresh; that’s why I’ve given her a little time in between starts,” he said. “She runs another ‘A’ race for us, hopefully.”

The 5-year-old is coming off a solid score in Belmont’s John Hettiner, displaying a huge late kick to prevail in that 1⅛-mile turf stakes for the second straight season. “She’s a very consistent horse,” said Brown. “She’s very good, and I think the mile and a quarter will suit her just fine.”