The Welcome to Yorkshire Ebor Festival at York last week certainly lived up to its billing as one of the great race meetings of the European year.

So what was the outstanding moment at an outstanding festival? Which performance is the one the sport should cherish for years, decades even, to come? Which horse achieved something that has the potential to leave a lasting mark on the development of the Thoroughbred?

Well it was none of the above.

The irony is that the G2 Weatherbys Hamilton Lonsdale Cup was not only not the big race of the day on Friday but that it was merely the second event on the Nunthorpe undercard, a backing singer for a headline act synonymous with the long-term trend in the sport that this particular Lonsdale had been tasked with confronting.

The victory of Stradivarius in the Lonsdale was remarkable not just because it meant he won the inaugural Weatherbys Hamilton Stayers’ Million, a prize designed ultimately to encourage owners, trainers and breeders to think a little bit more about stamina and a little bit less about speed, to try to jam a foot in the door that has been closing gradually on the development of the staying racehorse.

When insurance brokers Weatherbys Hamilton announced the Million back in January, they described stayers as “the real Trojans of the turf”.

They added, “Their battles over nearly two miles or more have made magnificent spectacles and live long in the memory. Many feel that it is imperative for the health and diversity of the European Thoroughbred that these bloodlines are perpetuated and cherished. It is hoped that the WH Stayers’ Million will help rekindle the fortunes of the stayer.” 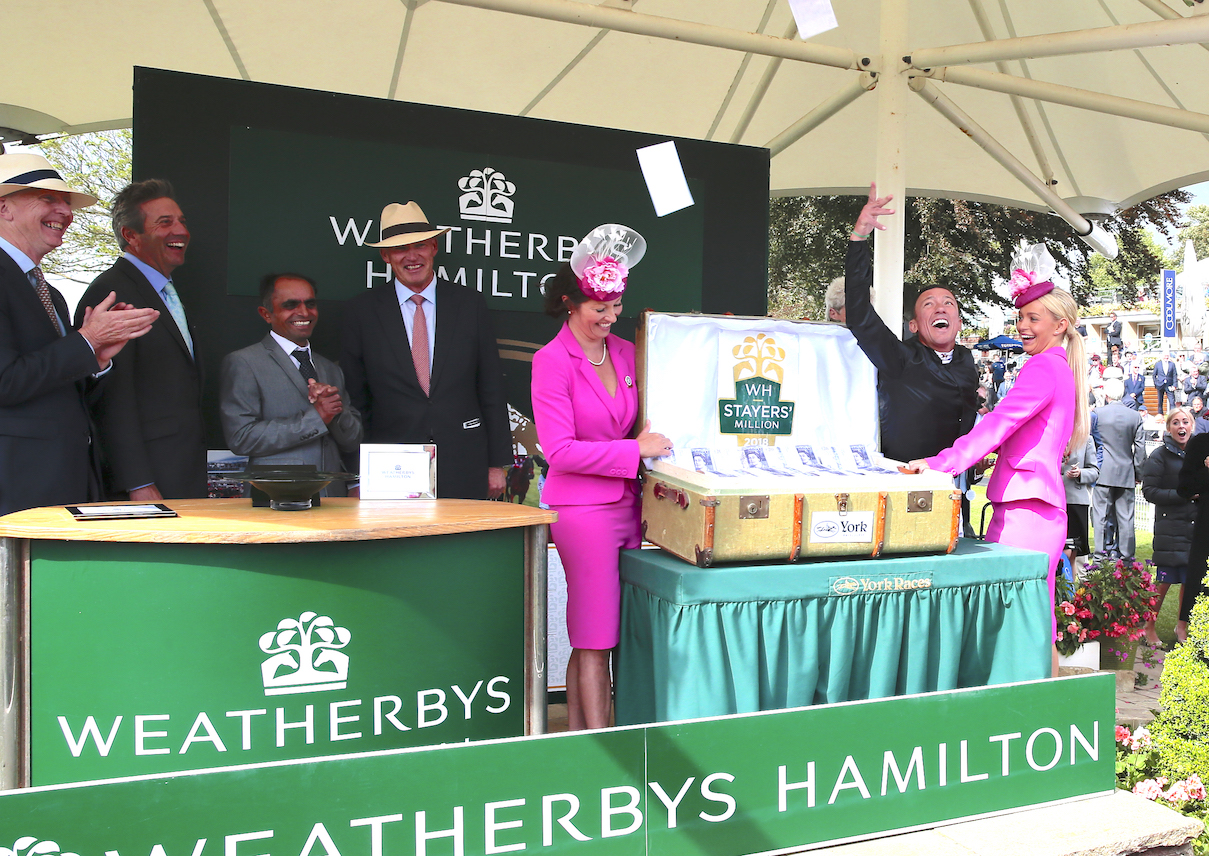 It looked a laudable attempt, but surely it was too tough an ask, too unrealistic. What kind of ‘Trojan of the turf’ could there be who could win major a stamina test in May (one of four exacting Group races had to be won even to qualify for a crack at the Million), an even more major one in June (the Gold Cup at Royal Ascot), another hugely severe examination in July (the Goodwood Cup) and yet another one just three and a half weeks later (the Lonsdale)? How close to impossible was that?

Remember, before the WH Million was even thought of, no horse had ever won this same combination of races in a lifetime, let alone a single year. In the past, a ‘stayers’ triple crown’ had been acknowledged involving the Gold Cup, the Goodwood Cup and the Doncaster Cup in September, another three weeks of recovery time after the Ebor Festival. This was won in 1995 by the Mark Johnston-trained powerhouse Double Trigger, but he had not been required to win a qualifying race. Previously, it had been achieved two years running (1979-80) by the phenomenal Henry Cecil-trained Le Moss, but again he didn’t have to win anything beforehand.

Back in January, the worry was that any momentum the concept generated would wither into nothing as soon as the Million became unwinnable. Which could easily be after Royal Ascot.

And then along came Stradivarius.

He won the G2 Yorkshire Cup comfortably enough over a mile and threequarters in May, prevailed in the Gold Cup over two and a half miles after a gruelling, sustained battle with the excellent French stayer Vazirabad and the similarly excellent Irish (now German) one Torcedor, was pushed to the same limits by Torcedor again over two miles at Goodwood and went to York with another two miles (plus half a furlong extra for good measure) and eight opponents between him and the £1 million bonus.

No wonder the strain was beginning to tell. “I wouldn’t say he was at his sparkling best today,” trainer John Gosden said after the race. Indeed, the son of Sea The Stars looked in trouble three furlongs out before knuckling down under Frankie Dettori to grind out a victory over Count Octave.

The race - both before and after - received good, solid publicity, but it was confined largely to the specialist media, and even there it never properly challenged the Nunthorpe for top billing. No-one broke ranks. They all knew it was a big deal, but few of them recognised that it was a really, really, really big deal.

Indeed, the low-qualify video of the race below is all that’s readily available on YouTube.

Whereas it used to be the case that Derby winners would naturally go on to contest Ascot Gold Cups, it is now ingrained in all of us to think of stayers as second-raters, as failed classic contenders, as animals with little or no value to the breeding industry.

We should think again. Stradivarius is a magnificent Thoroughbred, a sublime achievement by owner-breeder Bjorn Nielson. His WH Million is as notable as the four Gold Cups of Yeats, the back-to-back Arcs of Treve, the five King Georges of Kauto Star, even the Triple Crowns of Justify and American Pharoah.

As for turning the tide on the issue of breeding for stamina, of course, it is merely the first pebble in the pond. But the ripples are now strong. Now we know it can be done. Now owners, trainers and breeders know there's a £1 million bonus out there that might actually be winnable. It may be barely perceptible, but perhaps the stature of the stayer has risen a notch.

Thankfully the initiative will continue. Charlies Hamilton, the Weatherbys Hamilton CEO, said, “Changing the behaviour of the marketplace doesn’t happen overnight. It is extremely gratifying that Stradivarius’ success in the first year of the Weatherbys Hamilton Stayers’ Million has been such a huge boost for the stayers, but to put them back to where they belong is going to require staying power from everyone who shares that ambition.

“Given the fantastic reception that the Million has had from the industry and the public, we have every intention of continuing with the WH Stayers’ Million in 2019 and beyond, but we want time to reflect on whether there are any embellishments that we can make before announcing our plans.”

Bjorn Nielsen has indicated that his ‘Trojan of the turf’ will stay in training as a 5-year-old, probably to contest the same races. That should keep those ripples spreading.