After more than ten months at the top, during which his lead has for long times looked practically unassailable, Ryan Moore has finally been replaced as the world’s top-ranked jockey. The rider taking over is the man who has been closing remorselessly for the past few weeks: Australia’s Hugh Bowman.

The 36-year-old Bowman takes over in the latest edition of the TRC Global Rankings after a week in which he landed two G1s - one of them on wondermare Winx - on the second Saturday of The Championships at Randwick in Sydney while Moore was on duty - and out of luck - in Ireland.

The Englishman has held the number one spot since the TRC standings were launched last October. However, our data goes back to the start of 2014, and Moore has been in the top position for the last 46 weeks, and for 74 in total in that period, more than any other rider.

As you can see from the chart above, this is the 36-year-old Bowman’s second stint as #1, having held the top spot for seven weeks last year. Indeed it was after the first Saturday of The Championships at Randwick in 2016 when Bowman first went top (Winx was another big winner for him that weekend). He stayed there until May 22, when Moore took over as the Aidan O’Brien stable got into full swing.

As the chart shows, just seven riders have topped the standings since the start of 2014, Bowman being the second Aussie after Nash Rawiller, who had 25 weeks there at the beginning of that period.

Bowman has been closing in on Moore for several weeks. The TRC rankings are based exclusively on performances in Group or Graded races, and the Australian’s G1 wins on Saturday - on Winx in the A$4 million Queen Elizabeth Stakes and on the New Zealand filly Bonneval in the Australian Oaks (YouTube video above) - were the latest in a run of 12 victories at the highest level and 13 other Group wins since last August.

Moore has won nine G1s and five other Group races in that period.

Jockeys with the most Group/Graded wins since last August

Table in order of G1 victories

As you can see from the table above, Bowman has won more G1s than any other rider, although U.S.-based Javier Castellano, with 30, has the most Group or Graded victories.

Bowman is just one point ahead of Moore at present, so his tenure at the top may be short-lived with the Flat program now beginning to kick in in earnest in Europe and high hopes for another vintage campaign from Ballydoyle, where Moore is the number one rider. 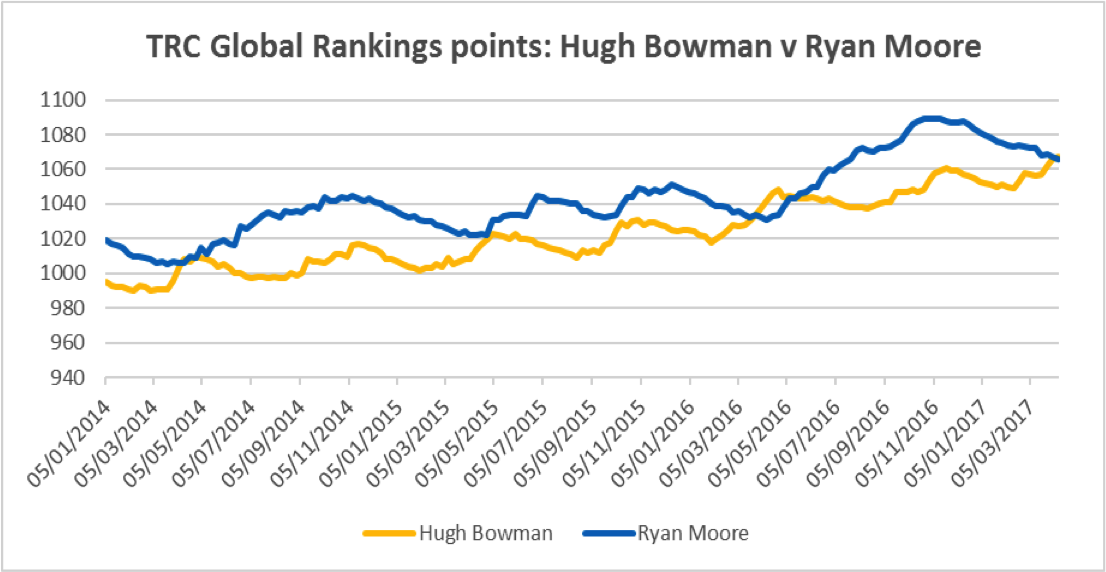 The graph here shows that both jockeys have been on an upward trajectory since the start of 2014. Note how Moore’s line has dipped over the European winter from an all-time high last November. He has had some success in the Far East over that period, but not enough to resist Bowman’s surge.

The pair hold a considerable 34-point advantage over Italians Frankie Dettori and Mirco Demuro, who are currently tied for third, narrowly ahead of Castellano and Christophe Soumillon, who are tied for fifth, and the fast-closing Joao Moreira, who is seventh.

Moreira gains a whopping seven points week on week in the latest standings thanks to victories in both G2s at Sha Tin on Sunday. This doesn’t improve his position in the table, but it does help bridge the substantial gap between the top six and the rest.