Australia’s two most successful trainers have had a relatively thin time of it in recent weeks by their own normal high standards, but suddenly Darren Weir and Chris Waller appear to have roared back to form - with impeccable timing.

The pair took two G1s each at the weekend - Winx (George Ryder Stakes at Rosehill) and D’argento (Rosehill Guineas) for Waller, Gailo Chop (Ranvet Stakes, also at Rosehill) and Hellbent (William Reid Stakes at Moonee Valley) for Weir, who landed another three G3s to give him a total of five Group races last week.

That means Waller is back in the top ten in the TRC Global Trainers’ Standings (he climbs from #11 to #9) and Weir has gone clear of Godolphin’s Charlie Appleby in the #4 slot. It also flags up that both teams are in rude health for the two biggest dates in the autumn schedule down under - the two Saturdays of The Championships at Randwick in Sydney (April 7 and 14).

The big news this week, of course, is the entirely sensible decision that Winx will stay put in Australia rather than heading off to Royal Ascot or anywhere else during the rest of her track career. An unprecedented fourth Cox Plate in October is the target, and Waller and owners Magic Bloodstock have agreed that staying home after the A$4 million Queen Elizabeth Stakes on April 14 gives the great mare the best possible chance of recording an achievement that would stand as one of the most remarkable in Thoroughbred history anywhere.

Meantime, her George Ryder win (her 24th consecutive win and 17th G1) not only boosted Waller’s world standing, it also enabled Hugh Bowman to wrestle the world #2 jockey ranking back from Japan-based Italian Mirco Demuro and lifted Magic Bloodstock to joint #3 in the owners’ list.

Perhaps the most significant repercussion of the big day at Rosehill on Saturday, however, was the rise of Snitzel to #4 in the sires’ standings, breaking the longtime domination of the current world top four (Galileo, Dubawi, Deep Impact and Frankel). The victory of his daughter Estijaab in the Longines Golden Slipper means Snitzel is now ahead of Frankel and is just two ranking points behind Deep Impact, the current #3.

Biggest climber of the week across all four categories was another Australia-based sire, the New Zealand-bred So You Think, who stands at Coolmore Stud in New South Wales. He is responsible for G1 Rosehill Guineas winner D’argento and G3 winners Think Bleue (at Moonee Valley) and The Pinnacle (at Rosehill). The resultant 14-point gain lifts So You Think 72 places to #53. 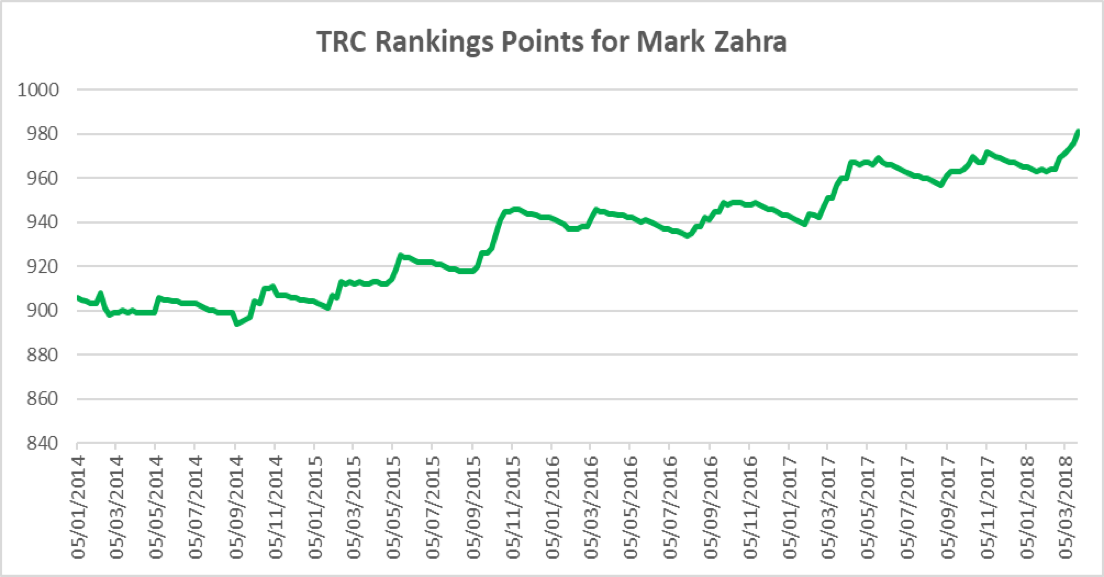 Saturday was another great day for Aussie rider Mark Zahra. A G2 win at Moonee Valley and the ex-French Gailo Chop’s Ranvet victory at Rosehill continued the 35-year-old’s remarkable rise in the world jockeys’ rankings (see graph). In the last three years, he has climbed nearly 300 places. He now stands at #22.