Aidan O’Brien is under siege. His once seemingly unassailable lead at the head of the world trainer rankings has been shrinking fast, so much so that, after last week’s action, the master of Ballydoyle has just seven points to spare over leading American Bob Baffert. And Godolphin’s Charlie Appleby, closing remorselessly on both of them, is only eight points further back, just ahead of U.S. #2 Chad Brown.

These are the kind of gaps that can disappear in a couple of weeks, even in the rarified air at the top of the standings, where points are hard to win. Yet, if O’Brien is to put the challengers back in their places, this is the time he is likely to do it.

This is his time of year. More particularly, this is his weekend of the year. Not only is he sending out favourite Kew Gardens for the Doncaster St Leger on Saturday, he will be fielding strong teams in all ten Group races (including six G1s) across Irish Champions Weekend at Leopardstown and the Curragh. Then there’s the small matter of Arc Trials day at ParisLongchamp on Sunday, where his runners are set to feature last year’s St Leger and Irish Derby winner Capri. O'Brien has regularly annexed three or four G1s on this weekend in previous seasons.

Irish Champions Weekend, of course, assumes even greater importance as no less than five of its contests are Breeders’ Cup ‘Win and You’re In’ qualifiers:

Three at Leopardstown on Saturday -

And two at the Curragh on Sunday -

It all adds spice to the battle at the top of the trainers' standings. At the start of 2018, the TRC Global Rankings for trainers stood like this: 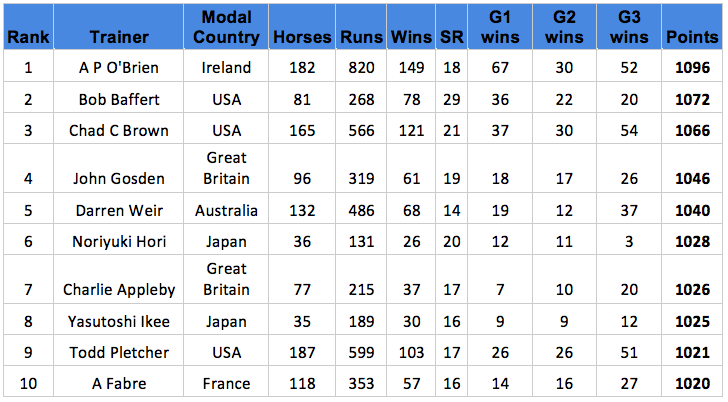 O’Brien, who had reached a career-high points total of 1105 in November’s rankings, stood imperious at the head of affairs. In the three-year rankings window, he had sent out a staggering 149 Group or Graded winners at an 18 percent strike rate.

Not only was this aggregate 21 clear of his nearest rival, Chad Brown, but, according to Racing Post Ratings (RPR) – our measure of the quality and competitiveness of each race round the world – O’Brien deserved extra credit still; his runners had won better races (67 at G1 compared with Brown’s 37) and in bigger fields.

Two Japanese trainers – Noriyuki Hori and Yasutoshi Ikee – made the list because the recency of each trainer’s performances is important (the rankings ethos is to predict next week’s likely wins) and the Japanese season is back-loaded (nearly half the Japanese G1s come in October, November and December).

Now, let’s fast forward to the latest trainer standings we published this week and analyse the top ten: 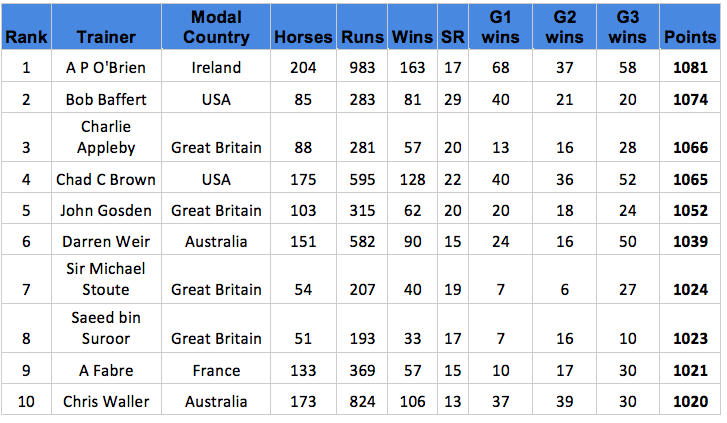 O’Brien’s points score – a rolling index of the trainer’s expected potency – has declined by 15, as his results have fallen below their usual ridiculously high standards. We will see in a second just what that means.

For the reasons stated above, the two Japanese trainers have disappeared from the top ten (Hori stands #20 and Ikee #16) while Sir Michael Stoute, Saeed bin Suroor and Chris Waller have reasserted themselves. Note the consistent points score of top-ten regulars John Gosden (1046 at start of year, 1052 now) , Darren Weir (1040/1039) and Andre Fabre (1020/1021).

So, what is the data driving these results? We will look now at two of the major components used by TRC Global Rankings.

First, here is a summary of the wins and losses of the top 20 trainers by wins in 2018 Group and Graded races, remembering that the position and RPR of every runner counts: 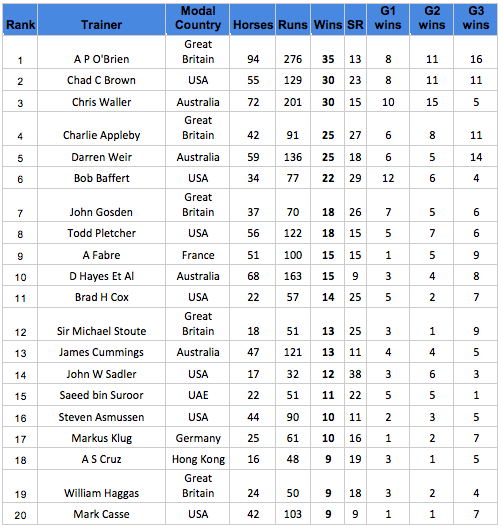 Table 3: 2018 Group and Graded results for trainers with most wins

O’Brien still leads the planet in wins! Notice, however, his strike rate has declined to 13 percent, resulting in fewer wins than at his absolute peak. O’Brien reports that some of his horses have suffered from a virus, but there is nothing like a crisis at Ballydoyle and normal service is expected to be resumed soon, possibly this weekend. Virus or not, his 2018 stable strength is not quite at the same level as the last couple of years.

By contrast, Charlie Appleby’s index has risen from 1026 to 1066 on the back of 25 2018 Group/Graded wins at a stellar 27 strike-rate clip. Some wonder why TRC Global Rankings have Appleby higher than Gosden, but, under our carefully laid out criteria, it is easy to see why: for one thing, Appleby has had more winners at a higher strike rate, and, in our main rankings you can see Appleby’s tRPR (the RPRs of his runners weighted by their recency) is 94.59 to Gosden’s 93.50.

Moreover, it is when we examine a second, important metric of potency that the reason for Appleby’s stellar rise becomes clear: the Head-to-Head (H2H) record of the two trainers’ runners. It turns out that this more granular measure of performance than binary Win-Loss really is an excellent out-of-sample predictor of future wins and losses. Take a look at the full H2H record of our top ten trainers: 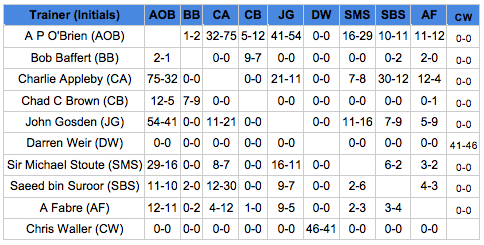 This is how to read the table: in 2018, Appleby’s horses have gone 75-32 against O’Brien’s and 21-11 against Gosden’s. You will see these figures if you scan across the row with Appleby’s name in it. These figures are the results of every single match-up. So, if Appleby happened to have one runner in a particular race and it defeated two of O’Brien’s, that would count as 2-0.

Every one of these H2Hs is weighted by coefficients derived from back-testing and optimisation. First, it is massively more significant if the H2H victory was first beating second, compared with ninth beating tenth. Second, it is more important at higher RPRs than lower RPRs. Third, it matters how recent the match-up is.

In this way, TRC Global Rankings constructs a massive network of relationships between every trainer and every other trainer, weighted accordingly.

This is a large part of the equation, but not the only part. Look along O’Brien’s row: he has a losing record against every single top-ten trainer overall, but part of this is his tendency to field multiple runners in a race. We take account of this carefully by down-weighting the second and subsequent finisher of each trainer: after all, if a stable sends out the winner, it is less important what happens behind.

Finally, it might be interesting to look at the same figures as in Table 3 but for every race since 2014. Here are those figures: 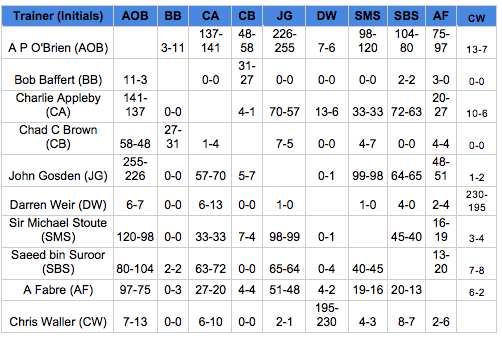 A few significant points: notice that Weir, who we have as the #1 trainer in Australia, is 230-195 against his chief rival, Waller, in terms of the H2H record of their horses, while Appleby is 70-57 against Gosden.