In the immediate aftermath of Ya Primo’s victory in the G1 Longines Gran Premio Latinoamericano, the focus shifted to how it was likely his last race in South America. Ahead of the contest, a 50 percent stake in the now dual G1 winner was sold to Sol Kumin, meaning Ya Primo is bound for the United States and will join Chad Brown’s barn. However, for the fans in attendance, his dominant win was a source of great pride for Chile, no matter what his future holds.

The Latinoamericano is the only G1 in the world that routinely changes countries, as it is constantly moving around South America. It is also the only race in the region that will draw the best horses from multiple countries together, and with that comes added satisfaction for whichever nation takes the victory.

This year the Latinoamericano was held at Club Hipico de Santiago in Chile, and it is a big year for the track, as it is celebrating its 150th anniversary. Club Hipico was designed after the original Longchamp in Paris, and it maintains that old-world feel to this day, down to its stained-glass windows and dramatic interior arches as fans pass through the six-story grandstand. 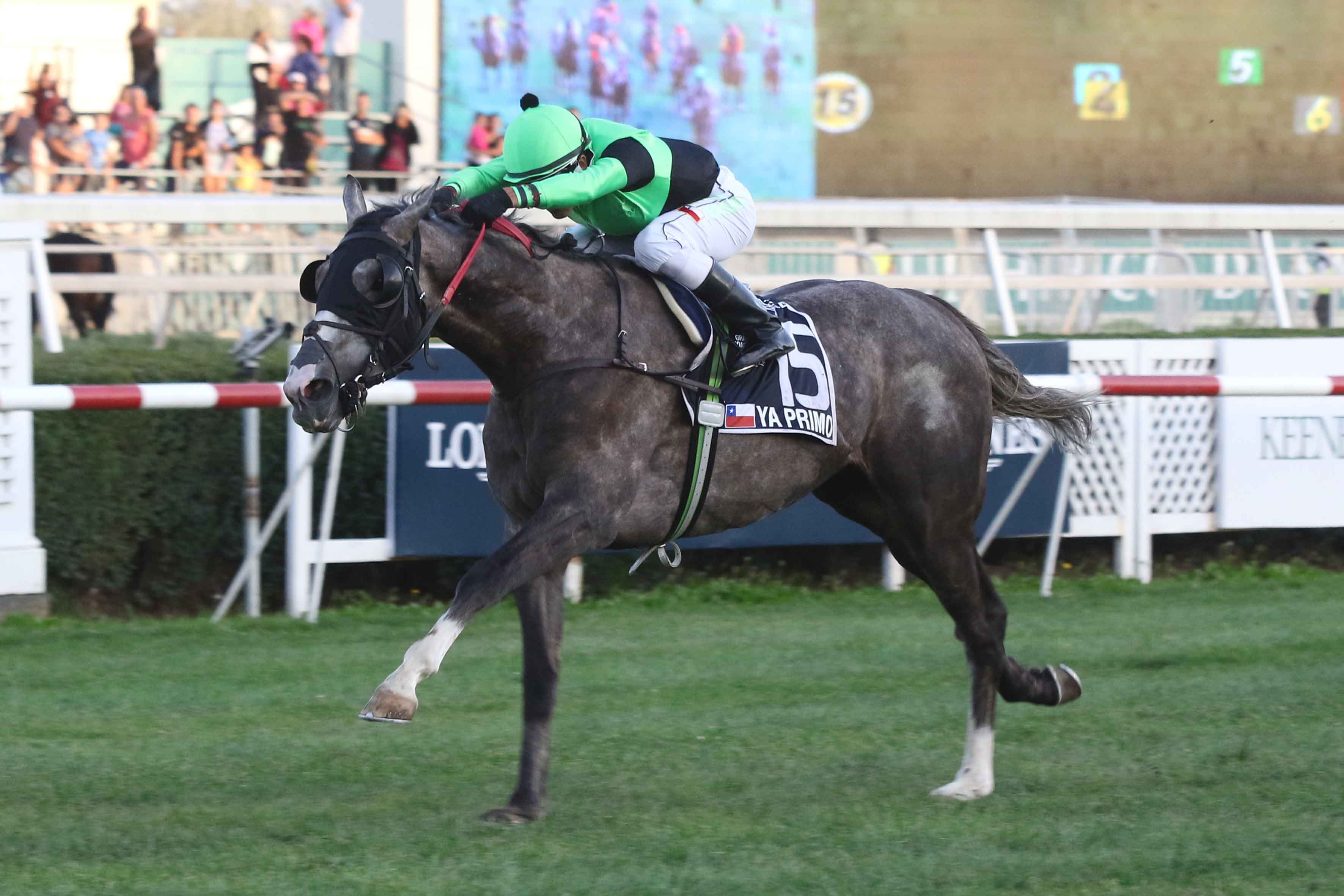 The crowd was a pleasing mix of men, women, and children on Lationamericano Day, and they had plenty to keep them busy. There was a bouncy castle for the kids, food trucks for the foodies, and 26 races for the bettors. Racing began at 11 in the morning and went non-stop until 11 at night. Apparently, a typical card on a normal day ‘only’ has around 18 races.

Although the races went off in quick succession — how could they not with 26 carded — there were still displays of national pride as huasos (Chilean cowboys) performed on track at one point, and a horse guard paraded while the Chilean national anthem played and the flag was raised immediately before the Latinoamericano.

The Latinoamericano itself was the 19th race of the day, and fans packed around the paddock to get a glimpse of South America’s best racehorses. Before the race, Chilean flags popped up throughout the stands as spectators prepared for a hometown win. While waiting for the horses to make it to the starting gate, the grooms of the runners were honored with medals in the winner’s circle.

Club Hipico is the only racetrack in all South America that runs clockwise, meaning many feel Chileans have an extra dash of advantage when the Latinoamericano is held there. Because the venue changes every year, the race itself can be run on dirt or turf, and over a variety of distances, but at Club Hipico it is a 2,000-meter contest on grass.

This year, the hometown team did their job and did it well. With Ya Primo leading the way, the Chileans took the first five spots, which is believed to be a first. Celebrations broke out afterwards, and Ya Primo himself was posed in front of the Chilean flag and then also stayed in the winner’s circle for at least ten minutes while We Are the Champions played on loop and 100 or so people gathered around for high-fives, handshakes, and selfies with the winner.

Ya Primo came into the Latinoamericano as the favorite in a field of 15. The son of Mastercraftsman took the G1 El Derby at Valparaiso in February and already had victories to his credit at Club Hipico coming into the Latinoamericano. Bred by Haras Don Alberto (known for champion Unique Bella in the United States), the gray raced in the colors of La Pacita.

A clear winner, Ya Primo kicked clear to take the Latinoamericano by 3¾ lengths over Nomar, who is also a son of Mastercraftsman. Third-place finisher Brown Storm is a son of Scat Daddy, offering more proof that the effort South American breeders have put into raising the quality of their bloodstock is paying off.

Penn Rose and El Expreso rounded out the top five, making it a massively impressive display for the Chilean runners. Argentina’s Pure Nelson, who finished sixth, was the best of the foreign raiders. 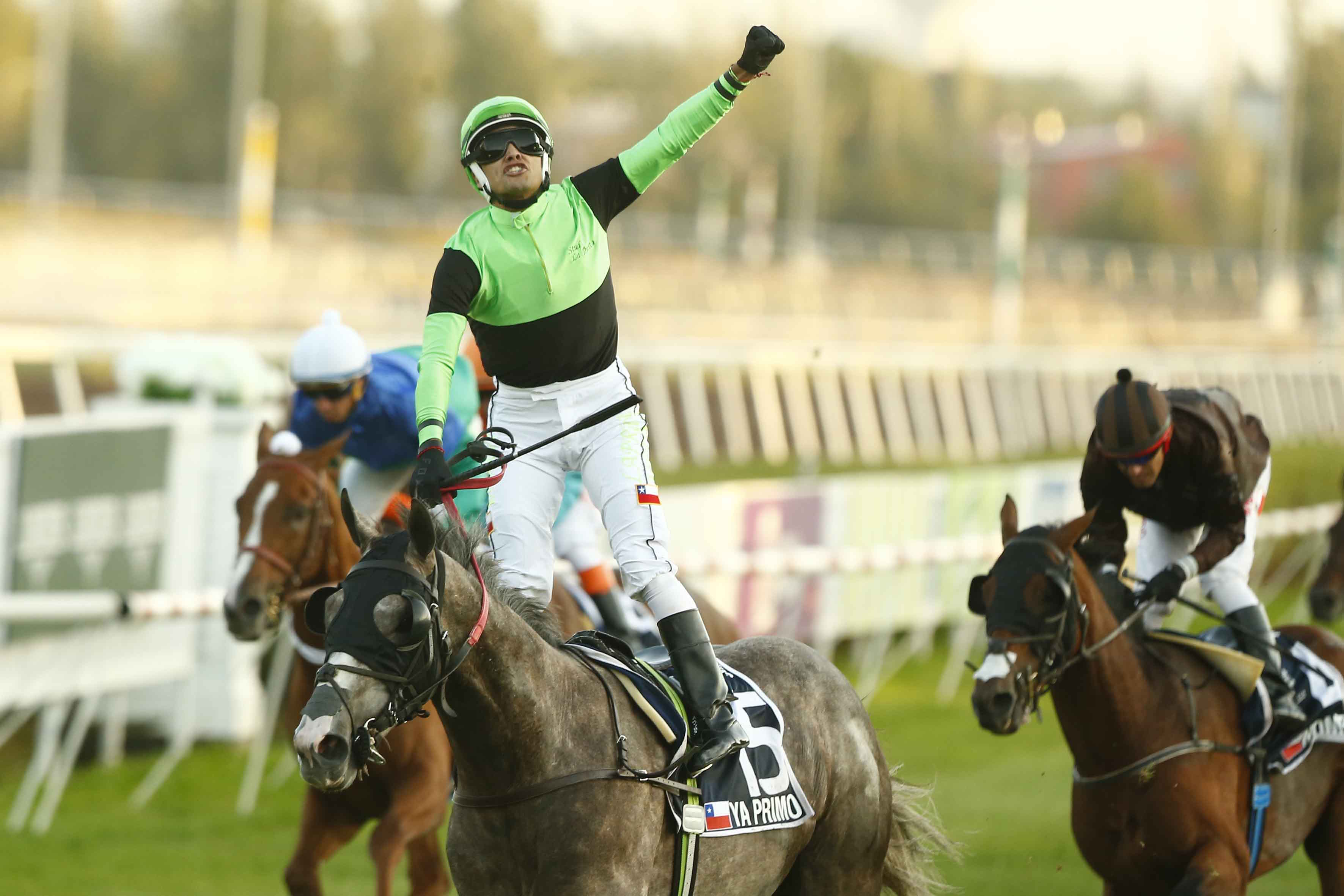 Ya Primo completed his task in a course-record time of 1:56.68 under jockey Jeremy Laprida. Laprida (currently world-ranked 193, but likely to rise after this success) basked in the victory, leading cheers in the winner’s circle and posing for photos and signing autographs long after the post-race press conference was finished.

Trainer Guillermo Aguirre (world #179), meanwhile, was overcome with emotion in a different way. Knowing before the race that it would be the last time he would saddle Ya Primo is poignant enough, but he is also still coping with the loss of his wife, who was murdered just a few months ago.

While international race fans may not have known Ya Primo before his victory, going to North America will likely help raise his profile. The pedigrees found in the Latinoamericano these days are certainly familiar to most racing fans, and plenty of South American runners have gone on to find success in North America. Last year, Chilean-bred Robert Bruce took the Arlington Million, and one of the leading stallions in the United States is Candy Ride, the Argentinean who was a top-class race horse in both South and North America.

“I was asked if I was sad for having sold 50 percent of the horse, but I am very happy,” said Javier Carvallo, who is vice chairman of Club Hipico and a partner in Ya Primo. “He’s going to the States with an excellent trainer, so we’re going to enjoy the horse in the United States, as we do here. We are going to meet Sol in a short while. I will travel to the U.S. to see him race.

“I think he’s very good, winning over the best horses in South America, including the Argentinians, and of course, winning the Derby. He’s very strong. This horse is well trained. He eats a lot; he’s a good doer. The sky is the limit. He’ll do very well.”

If Ya Primo can do well in the United States, it will be a boost for all South American racing, which is constantly working towards raising its own image in the international Thoroughbred industry. Ultimately, though, the Organización Latinoamericana de Fomento del Pura Sangre de Carrera (OSAF) wants international runners to come and compete in the Latinoamericano.

The Latinoamericano is undoubtedly a race day to remember, which is why horses come from all over South America to run in a contest that is rich in both purse and pride, even though quarantine and travel is not as simple as it is in other places.

Next year, the race will be held in Buenos Aires, and the goal is to have it at Florida’s Gulfstream Park in 2021 as part of the effort to continue to raise the bar. In the meantime, Ya Primo will carry with him the pride of Chile as he goes to North America and attempts to conquer his own new frontiers.