Unfortunately, there may always be a need for Saratoga WarHorse to exist. Fortunately, it not only exists, but has expanded.

Founded in 2009 by horseman and Vietnam War veteran Bob Nevins, Saratoga WarHorse is a non-profit organization assisting veterans who suffer from psychological wounds that inhibit their daily lives. The program provides a confidential, peer-to-peer, equine-assisted experience using retired Thoroughbreds that brings both immediate and longer-lasting changes to veterans’ lives.

About 200 veterans have participated in the three-day classes, the great majority of them in Saratoga Springs. Last February, however, the organization announced it was opening a second location in Aiken, South Carolina. With its first class having taken place in May, Aiken is now part of the regular lineup.

“Aiken came about when a family down there, which has Aiken Equine Rescue, a beautiful 90-acre facility [taking] off-track equines approached me,” Nevins said. “They saw it as a natural fit. They offered me the use of the entire facility to run War Horse.” 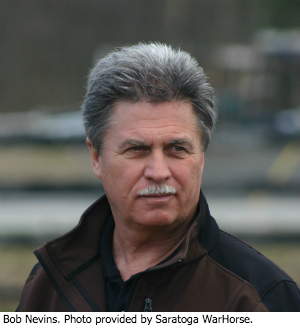 Nevins originally started the program because he was deeply concerned with veterans’ suicide rate - a 2013 Department of Veterans affairs report put the number at 22 deaths per day - and he maintains that his and other successful post-war programs prove action-based experiences are best.

“It’s a little frustrating that people aren’t seeing talk therapy does not work,” Nevins said. “You’ve got to have an emotional experience.”

When veterans choose to attend a Saratoga WarHorse session, they incur no cost. On average it costs about $3,000 per veteran, including transportation, hotel accommodations, and meals. Once they are flown in, groups of about six to eight veterans talk to Nevins, the lead instructor, on the first day.

“Part of the component is they’ll talk to me and give it a shot,” Nevins said. “We protect them, and once they’re through this program, they can’t wait to tell someone else about it.”

On the second day, the lead Thoroughbred instructor guides the veterans about what they may experience with the horses. By the end of that day, they are paired with one of the horses they’ve watched and learned some things about. The veteran leads the horse into the round pen and unhooks the lead line. The veteran and horse then work through orchestrated moves designed to build trust of one another. Usually not long after that, the horse walks to the veteran and the most important connection is made.

Nevins believes his program is special because of the vulnerability of horse and veteran, both of whom are coming off regimented lives. Here is a horse, but that for good luck and care, could end up in a slaughterhouse. Here is a veteran who more than likely isn’t sleeping, is having multiple issues dealing with loved ones and people in society, and now needs someone to understand him or her.

“We’re teaching how to communicate with horses,” Nevins explained. “Well, the horse knows they are prey. Everything in their being tells them they’re now dealing with a predator. When a predator can speak the prey’s language, they transcend the barrier. This horse gets to join the herd, and the predator gets to realize, ‘I’ve spoken a language without using force, determination, or violence.’ That’s the transformation. This horse has come to me. They get this feeling from the horse they wish they could get from society, yet society doesn’t know how to welcome them back.” 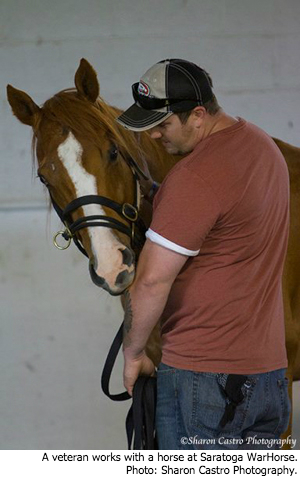 Nevins is clear about what his program is and isn’t. He says he’s not there to offer mental-health work or fix anyone. He doesn’t pretend that those three days are the end of the story. What he offers is an experience that could change the veterans’ lives in a meaningful way. He said he “triggers” the veterans’ hearts again.

Nevins follows up with participants, but also reaches out to other veteran services.

“When they come here, they start to sleep again, and when they do that, it’s because their nightmares went away,” said Nevins, who cited just a couple of many positive follow-ups he’s done.

“One made the dean’s list in college,” he said. “This one woman, since 2005, hadn’t been able to sleep without the TV on. They sleep with one eye mentally open, and they adjust to that life. And who wants to adjust to that?”

Anne Campbell, who along with husband Cot, are the backbone of Dogwood Stable in Aiken, first learned of Saratoga WarHorse several years ago after meeting the wife of a U.S. Military Academy graduate and veteran who had committed suicide at age 26. While spending one of her annual summers in Saratoga Springs, she witnessed a class.

“When the eyes of the horse met the eyes of the man, something on a very deep level happened,” Campbell recalled. “It’s just simple, vulnerable. I think it’s the way God meant it to happen.”

At first, Nevins had to fly his team to Aiken, but he now has a full team in place there.

Campbell, now on Saratoga WarHorse’s board of directors, said the program has been a huge success in Aiken. One good thing is that the Aiken location is busier this time of year when Saratoga weather is difficult at best. Aiken has also – though unintended – been more accessible for southern veterans. While that may save some money on flights, Campbell explained the organization views it as having one pot, out of which either location may spend the money if it needs it.

Campbell and noted Aiken civic volunteer Bill Reynolds are chairing the upcoming Buckaroo Ball in Aiken, which will be on Feb. 27 and benefit Saratoga WarHorse.

Since he relies on donations, for now, Nevins doesn’t see expanding beyond Aiken. It’s not that there isn’t a need, but Nevins wants to establish Saratoga as sort of the “world center” for his program and wants to expand only if it can be run his way.

“If I choose to expand, I’ve got to have the financial wherewithal so that it comes at no cost to the veterans, and I’ve got to protect my brand,” Nevins said. “There are other programs that want to add a riding element, et cetera. We’re not dealing with that.

“We do a very specific procedure here,” he added. “Others offer good programs, but it’s either a therapeutic riding program and they want to add a veteran program to it, or something else that’s a little different. It’s not like I have a lock on horses, but…I’m kind of the Starbucks of what I do. We’re consistent with what we do every time.”