It may have been a massive week of classic action in both Britain and America, but the biggest moves in the TRC Global Rankings came elsewhere, as James Willoughby reports.

Most weeks, either Irad Ortiz Jr (+3pts, #11 from #13) or Ricardo Santana Jr (+9pts, #38 from #48) would likely win, for both rode three winners. Instead, it’s South African legend ANTON MARCUS (+20pts #15 from #27) after an outstanding week in which the veteran rider bagged an amazing four winners at Turffontein Standside, including the G1 The Premier’s Champions Challenge.

The magnitude of a change in points reflects not just the aggregate of a competitor’s success in any given week, but the degree to which it represents a so-called ‘statistical shock’ to our system. By this, we mean a change of 20pts – while not unprecedented – happens only when outlying results are added to the TRC Global Rankings system. 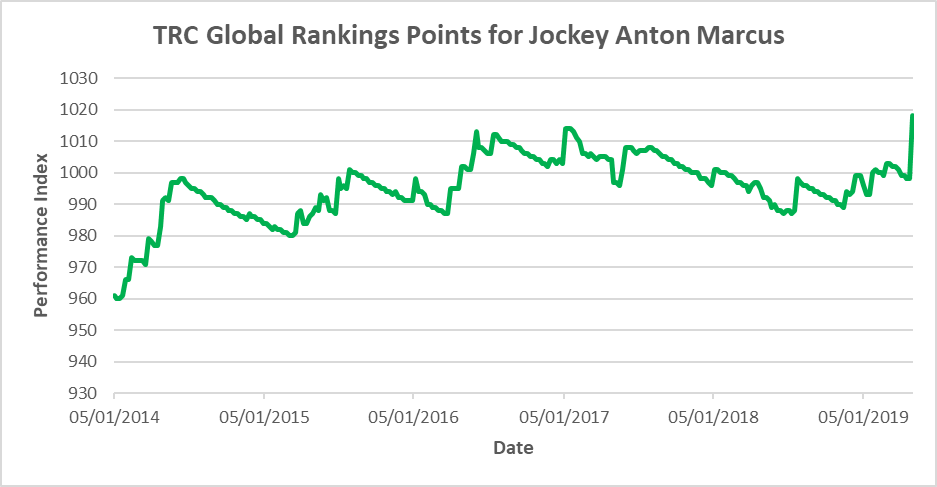 We cannot speak for the period before we started producing the rankings in 2014, but within the timeframe of TRC Global Rankings, Marcus has reached a career high in performance index (points). This has arisen partly because the rider is still in high demand: his four winners came for three different trainers: resurgent #16 Mike De Kock (2), #56 Sean Tarry and #149 Joey Ramsden.

Interests of the latter currently appear under two different ownership entities (we will amalgamate the different forms next week) but two Grade 1 wins clinch the award.

The Heiligbrodts won the G1 Churchill Downs Stakes with Mitole (who achieved a very high level of form) and the G1 Humana Distaff with Mi Mischief – both on the Kentucky Derby undercard at Churchill Downs. Both winners were trained by Steve Asmussen (+6pts, #14 from #16).

Invincible Spirit’s two winners were Digital Age in the G2 American Turf Stakes at Churchill Downs and, notably, Magna Grecia in the 2000 Guineas at Newmarket. The latter – owned by word #2 Coolmore Partners – is likely a very significant result, given that two of the hottest sires on the planet – fast-rising world #129 Kingman in Europe and #6 I Am Invincible in Australia – share their sire with the G1 2000 Guineas winner.

For this reason, Magna Grecia is likely to be kept to around a mile for now, rather than challenging for the Derby at Epsom over a mile and a half.