After attending the 2014 Asian Racing Conference in May, I wrote a commentary suggesting that wagering indicators in the United States and Great Britain did not compare favorably with the other four major racing jurisdictions: Australia, France, Hong Kong, and Japan. Now, I turn my attention to the U.S. Thoroughbred racing business.

There is a longstanding and serious structural problem in Thoroughbred racing in the U.S. The highest quality racetracks do not receive appropriate compensation for their signal in the simulcast and Advance Deposit Wagering (ADW) markets. In addition, too many small, low-level tracks are incentivized to run races to maintain their simulcast or alternative gaming licenses.  Races run at low-rung claiming levels do not make economic contributions back to the industry in the form of purses and breeder awards, and research has shown that horses running in claiming races run a higher risk of sustaining catastrophic injuries.

As noted in my previous commentary, the U.S. conducted 44,929 races in 2012 – more than double the number run in Australia, which comes in second among major Thoroughbred racing countries. The sheer volume of U.S. races along with general handle declines result in the U.S. having the lowest wagering volume per race among the top six racing nations by a factor of three.

The U.S. also trailed the five other countries in prize money yield, the amount of wagering dollars generated by each dollar of purse that is offered. For every dollar of prize money offered in 2012, the U.S. wagering market generated only $11.60. By comparison, Australia, second lowest, generated $28.64; and Great Britain came in highest at $147.29 in wagering for each dollar of purse offered. Current purse levels in the U.S. are not sustainable at this level of wagering. This is especially true in racing jurisdictions that receive purse contributions from alternative forms of gaming. In some states, these contributions are now at risk as governments seek to reduce the level of these payments.

The simple fact is that too many low-level claiming races are run in the U.S. Let’s look back at the tracks that were running on Saturday, July 12, before the prestigious Saratoga and Del Mar race meets opened.  In the U.S. and Canada, there were 36 tracks that conducted Thoroughbred racing that day. Lamentably, 27 of these tracks (or 75 percent) ran at least one race at the $5,000 claiming level or below.

Why are low level claiming races so pervasive in American Thoroughbred racing? One of the major contributing factors is the flawed economic model that has existed in simulcast pricing during the last 30 years. The pricing model for U.S. simulcasting developed in the late 1980s -early 1990s when a majority of the wagering on Thoroughbred races was still taking place at the live track. Simulcast revenue was then considered incremental business for the host or simulcasting track.  Its initial pricing model compensated the “host” track where the live race originated with 3 percent of the wager. Since takeout rates then averaged approximately 20 percent, the receiving track where the bets were made received 17 percent of the wager. By way of example, Gulfstream Park would sell its signal to upstate New York’s Finger Lakes for a 3 percent signal fee. Gulfstream would generally split the signal fee 50-50 – a paltry 1.5 percent each – between the track and their purse account.

Another simulcast pricing model that developed at this time was that of the off-track betting shop or OTB. As simulcasting evolved in the 1980s, New York City OTBs refused to pay any racetrack a simulcast fee greater than 2.75 percent. At the time, justification for this low fee structure stemmed from NYCOTB’s stature as the largest bet-taker in the U.S., and these flawed economics remained largely in place until its 2009 bankruptcy and ultimate closure in December 2010. Fatally, NYOTBs had no interest in working collaboratively with the racing industry upon which they depended; their priorities were political patronage and allegiance to their local communities. This obsolete New York pricing model provided an ongoing albeit misguided rationale to receiving sites to keep prices at a low level, which continues to negatively affect the industry at large.

While the simulcast splits paid to higher-quality racetracks were never justifiable on pure economics, the arrangement seemed palatable when most of the wagering took place on track. Today, however, on-track wagering in the U.S. averages only 11-12 percent of total handle, meaning the vast majority of wagering occurs off-track or via account wagering companies.  Higher-quality tracks went from splitting 15 percent of the on-track wager with their horsemen to splitting the simulcast fee of 3 percent.

The lopsided economic model for simulcasting also fostered direct competition between ADW companies and the racetracks. Under this model, the ADWs could provide rebates to customers that the tracks themselves could not afford to pay.

It didn’t take long for small tracks to realize that offering simulcasts from New York, California, Florida, and Kentucky would generate greater revenue than wagering on their own low-level claiming races. But because of state racing rules and the leverage of local horsemen’s (read trainer) organizations, these small tracks are generally mandated to run a minimum number of live race days. This enables them to keep their simulcast licenses or in some cases to conduct casino gaming at the track. The financial model that drives a profitable racing program is voided if the track’s simulcast business is more important than the live racing. And it leads to a general degradation of the racing product in the form of low-level claiming races.

Remarkably, the financial simulcast model has not changed in a way consistent with the dramatic shift away from on-track wagering.  While simulcast rates for smaller simulcast locations have increased incrementally, it is a surprising fact that simulcast outlets such as dog tracks, harness tracks, small Thoroughbred tracks, and ADWs all receive a higher percentage of their customers’ wagers on major tracks such as Del Mar, Santa Anita, Gulfstream, Woodbine, Belmont, and Saratoga than the tracks do themselves. That’s right, the best racetracks in the U.S. make less money than a dog track does for a bet on their races.

What this means in practical terms is that the higher-quality racing circuits receive a disproportionately smaller return on the signal that they send to simulcast locations. In effect, these higher-quality tracks have traded a previous higher return on live track bets for a substantially lower return on their simulcast signal. This economic imbalance has meant consistently lower revenues to the higher quality  tracks and to their purse accounts and breeder awards. I estimate that a majority of the smaller tracks could not continue to stay in business if they had to pay an additional 5 percent of the handle on the higher-quality tracks. At a minimum, this would begin to reflect the true value of these better races.

If the U.S. racing industry continues to support smaller tracks and cheaper races at the expense of the higher-quality tracks and the horse owners and breeders that support quality racing programs, the future growth of Thoroughbred racing in this country is in jeopardy.

Another factor that has seriously affected the health of the U.S. racing industry has been the dramatic increase in the number of casinos in the U.S. during the last 20 years. The accompanying chart shows the number of casinos in the U.S. as compared to other major racing countries. The ratio of casinos to a country’s population is substantially higher in the U.S. than any other major racing jurisdiction. It is generally accepted that a new casino opening within a 50-mile radius of a Thoroughbred racetrack can cause a reduction in live on-track handle by as much as 20 percent. 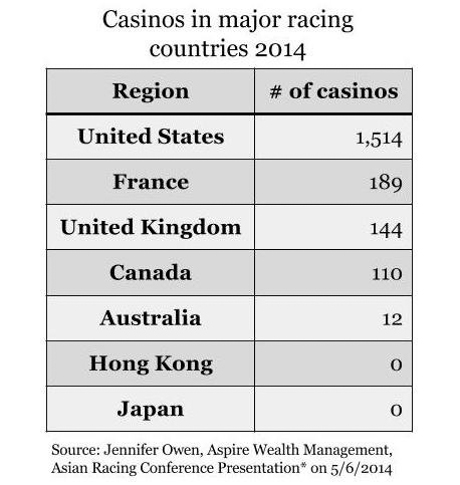 Ironically, many racing jurisdictions in the U.S. have supported expanded gaming to achieve short-term gains for breeding and purse accounts. I say short term because some states with expanded gaming making contributions to purses, such as Pennsylvania and Indiana, have already curtailed some of these payments to the racing industry from alternative gaming. As a further example, in New York, the current governor is about to award licenses for seven full-blown casinos with no provision that horse racing will receive any of these additional funds. 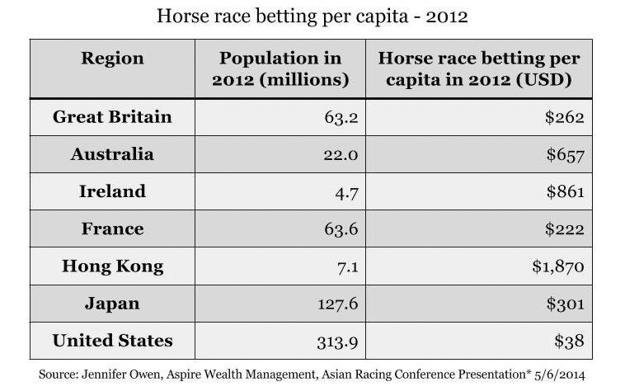 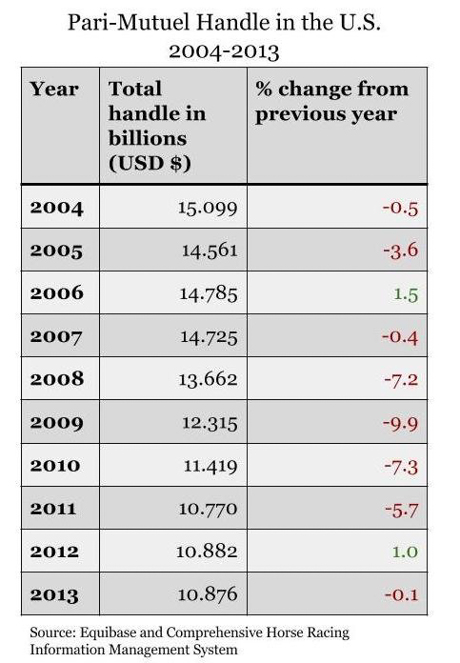 The Thoroughbred racing industry, led by The Jockey Club, has made substantial progress on safety, television production, drug testing, and other important areas of reform. However, a number of additional issues need to be addressed by racetracks, horse owners, and regulators. These include stronger efforts to reduce the large number of low-level races, a rationalization of the simulcast pricing model, and a re-structuring of the ADW model to properly benefit racing’s stakeholders.

Finally, racetrack operators, owners and regulators need to get serious about studying optimum takeout levels to maximize financial return to racing’s major stakeholders. Thoroughbred racing is not a competitive wagering product with its current high-takeout structure. An objective review of the handle declines noted above tell you all you need to know. Too many times, regulators and tracks make decisions that put an incremental financial burden on the backs of the wagering public. It is staggering to think that racetracks are not making any efforts to engage in studies to develop optimum takeout rates that will return additional monies first to customers, which would then result in higher returns to tracks and increased purses to owners. High takeout is destructive for the entire industry and it is slowly chasing customers to other forms of leisure and gaming activities.