On May 3, 1952, Churchill Downs conducted an experiment of sorts by partnering with CBS to broadcast the Kentucky Derby live to a national television audience for the first time. Proceeding cautiously, then track President Bill Corum made a measured statement: “We are going to study the effect on crowd, betting, and such before committing ourselves to future contracts.” Though only one in three American homes owned a television in 1952, roughly 10 to 15 million viewers tuned in to watch favorite Hill Gail win the 78th Kentucky Derby during a telecast lasting all of 30 minutes. Mr. Corum was pleased to learn that attendance and wagering handle increased from the previous year, and as far as the future of the Kentucky Derby on television was concerned, the rest, as they say, is history.

The other jewels of the Triple Crown, the Preakness Stakes and Belmont Stakes, would make their national television debuts on CBS in 1960. Much has changed over the years in the way that television is watched and in the way that the Triple Crown races are produced and televised, but the one constant has been the popular appeal of watching the Kentucky Derby. That was true in 1952 when the average viewer was lucky to have five channels from which to choose, and it’s true today when you might have five different 24-hour sports channels you’ve never watched.

It didn’t take long for Americans to embrace their first larger-than-life Thoroughbred on the small screen. In 1953, just as the Kentucky Derby and television were beginning their long and profitable relationship, Native Dancer came along to enthrall viewers and become the first equine television superstar. As many as 30 million viewers may have watched the Grey Ghost in the Derby, his only career loss.

CBS would be the home of the Triple Crown on television throughout the 1950s, 1960s, and into the 1970s, an era that overlapped with the “Triple Crown gap” from 1949 to 1972. For the most part these were one-hour programs produced and presented in a very detailed, straightforward manner. The 1973 CBS telecast of Secretariat’s Kentucky Derby devoted precisely one minute to the Derby “scene” — the infield, mint juleps, and other familiar trappings. Instead, they focused on describing process and procedure. The first time the camera panned to the tote board was to show Secretariat’s record-breaking final time of 1:59.40. This was televised sport in its purest form.

Until Secretariat, the Triple Crown of Thoroughbred racing was really little more than a 1930s media creation. But in 1973, Secretariat and television combined to cement the idea in public minds that the Triple Crown was something very real, tangible, and special. The Triple Crown had been achieved in stirring fashion — and for the first time since Citation in 1948 — and America watched it all from the comfort of their own living rooms.

With two more Triple Crown champions in Seattle Slew (1977) and Affirmed (1978), the 1970s was a heady decade for racing and television that featured massive audiences. The share (a program’s percentage of all households watching television) for Secretariat’s 1973 Belmont telecast on CBS was estimated by Nielsen to be a towering 52. For Seattle Slew’s Triple Crown clinching Belmont telecast in 1977 the share was estimated at 53.

In 1975, ABC wrested the Kentucky Derby away from CBS promising more cameras, more commentators, more coverage of the people in racing, and a higher quality of production. Churchill Downs was eager to try something new and ABC delivered on its promises and won an Emmy Award for its coverage of the race in 1981.

Emboldened by their shiny hardware, ABC raised eyebrows by increasing its Kentucky Derby coverage to 90 minutes in 1982. Many were dubious at the time about the value of an extended telecast, but ABC stood fast. “There are very few sports that the American public follows so little, but becomes so interested in for one race,” host Jim McKay told the Dallas Morning News. “There’s a tremendous amount of familiarization to do on the day of the race. There’s the horse, the owner, the jockey, and the trainer, and it’s important to do as much as possible on who they are and where they came from.”

Sportscaster Howard Cosell summarized ABC’s production strategy a bit more bluntly to the Washington Post: “You have to be willing to alienate - or at least talk at a sophisticated level they’re not at all pleased with - the serious horseplayer,” he explained. “You can’t be concerned with them. You have to worry about the 99 percent who are watching just because it’s the Derby.”

Also in 1982, for the first time in history, Kentucky Derby Day undercard races were televised to a national audience via the upstart 24-hour cable sports channel ESPN. In the early 1980s Triple Crown coverage on television was changing and beginning to look more like what we see today.

The year 1985 brought unexpected controversy to the Triple Crown. Dennis Diaz, owner of Kentucky Derby winner Spend A Buck, opted to skip the Preakness Stakes (and forfeit a Triple Crown run) in favor of the Jersey Derby at Garden State Park and a potential $2 million bonus. This decision, though ultimately a very profitable one for Mr. Diaz, was met with soul-searching within both racing circles and the television networks.

Though virtually unthinkable today, a healthy Kentucky Derby winner opting out of the Triple Crown was not without precedent. The connections of Swaps did the same in 1955, as did the connections of Tomy Lee in 1959. Little fuss or rancor accompanied those situations, but that was long before Secretariat had come along. Stakeholders in the Triple Crown — racing fans, the racetracks, the networks, and the public — demanded action.

ABC would televise the Triple Crown races for the next decade and a half. In 1999, NBC powerfully outbid ABC and CBS for broadcast rights, and with the exception of The New York Racing Association  breaking the Belmont off to ESPN on ABC from 2006 to 2010, it has been the Triple Crown’s television home since 2001.

NBC has left its mark on Triple Crown telecasts (now stretching to three hours), and the Derby in particular, in the form of additional coverage of the tangential aspects of these events  — the celebrities, fashion, and pageantry. Always popular among women, the Derby was a perfect vehicle to target female viewers with aspects of the event other than the race itself. The viewership data indicate these tactics have paid dividends. 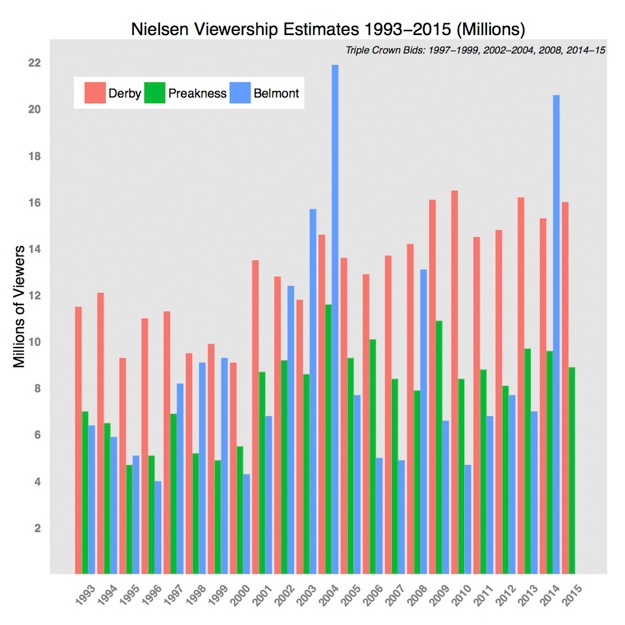 In the ultimate litmus test for Thoroughbred television stardom, Belmont viewership will eclipse and even far surpass that of the Derby. This occurred with Funny Cide in 2003, Smarty Jones in 2004, and California Chrome just last year. Each of these Triple Crown runs fused extremely popular and talented horses with “little guy” connections, and the story lines almost wrote themselves. The general public is drawn into this kind of narrative like moths to a flame.

It’s entirely possible that Big Brown (and a very different narrative) might have joined this elite group. But his Preakness and Belmont viewership came on the heels of Eight Belles, the only confirmed equine fatality in the 141 years of the Kentucky Derby. It’s not a stretch to think that some viewers tuned out of the 2008 Triple Crown as a result.

The annual precipitous decline in viewership from the Derby to the Preakness is especially vexing for the networks, the racetracks, and the racing industry. After all these years this may be an unsolvable problem, but a closer look can only help. 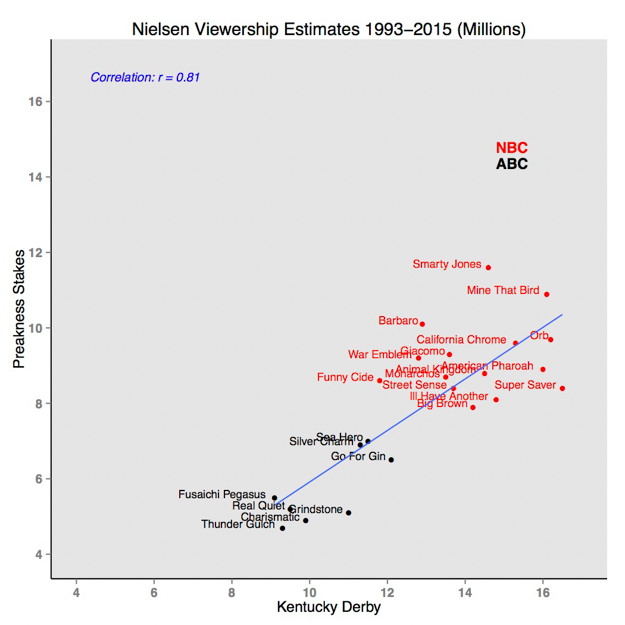 It stands to reason that the quality of performance from the Kentucky Derby winner may play a role in retaining viewers for the Preakness. This notion is easily put to the test in the form of winning margin. 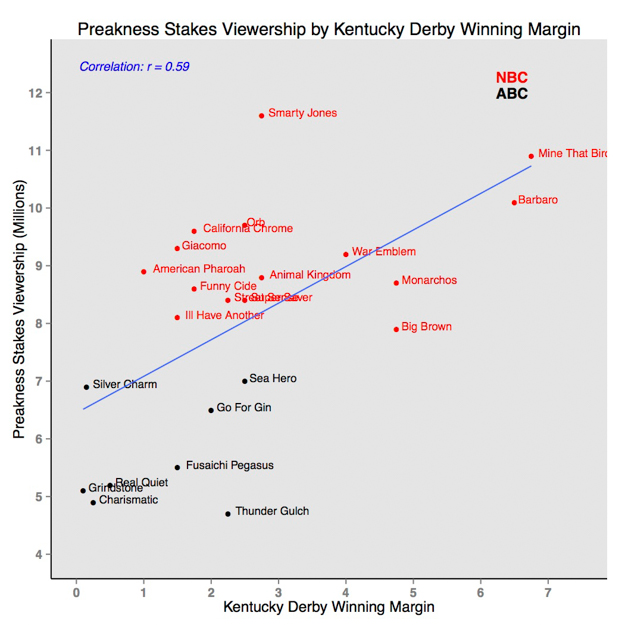 This relationship is also positively correlated but only in a weak, unconvincing sense. Moreover, Mine That Bird’s 2009 Preakness viewership was obviously influenced by the presence of the popular filly Rachel Alexandra. While it is naive to posit Kentucky Derby performance to be a leading driver of Preakness viewership, it is also a mistake to dismiss it as inconsequential. This is a proverbial piece of the puzzle.

There are fundamental forces in play that drive and shape Triple Crown viewership while trumping other factors. The iconic Kentucky Derby brings a vast, automatic audience, inflated (of late) with “celebrity/lifestyle” viewers cultivated by NBC. The Preakness, despite a built-in narrative of suspense, is the Triple Crown’s television version of Sisyphus. And the Belmont’s fortunes are utterly dictated by the possibility of a Triple Crown champion.

For Thoroughbred racing, future fans, owners, and horseplayers will continue to discover the sport via the Triple Crown on television, just as they have since 1952. But this flow is more of a steady trickle than a rushing river. To ask any more of these telecasts is to ask too much and to guarantee disappointment.

The evolving story of the Triple Crown on television continues on June 6. Will American Pharoah (with a back story quite unlike Funny Cide, Smarty Jones, and California Chrome) break the mold by drawing a Belmont viewership greater than his Kentucky Derby? Will NBC (with the Kentucky Derby locked up for the next decade) extend its expiring contracts with the Preakness and Belmont? Will ESPN/ABC, CBS, or even FOX force their way into the conversation?

Only time will tell. The only sure thing is that Americans will swarm to watch the Kentucky Derby on television the first Saturday in May, and viewership for the next two televised jewels of the Triple Crown will unfold the way it always does.