One of the main functions of the TRC Global Rankings is to shine a light on individuals to watch - jockeys, trainers, owners and sires who are growing in influence, perhaps before many realise it. Today that light is shining quite clearly on three stallions whose steady rise marks them out unequivocally as sires of real importance.

Make no mistake, the impressive climbs in this week’s updated standings of Not A Single Doubt, I Am Invincible and Tavistock are no flashes in any pans. These stallions have been improving their positions gradually and consistently throughout the history of our rankings, and that momentum is unlikely to slow anytime soon.

Tavistock, who stands at Cambridge Stud in New Zealand, is particularly notable. The son of Montjeu has just three crops of racing age, yet he has already reached joint #28 in the sires’ list (up from 38) thanks to a seven-point improvement after last week’s Group and Graded results. His star performer last week was the 2016 Australian Derby winner, Tavago, who won a G3 at Rosehill on Saturday.

You’ll see from the accompanying graph of rankings points totals over the last three years that Tavistock’s progression is very similar to the other two stallions we are highlighting here.

I Am Invincible is alongside him at #28, up eight places on the back of a six-point week-on-week gain. His main contributor was Saturday’s G2 Flemington winner I Am A Star. The son of Invincible Spirit, who stands at Yarraman Park in New South Wales, is also the sire of Brazen Beau, one of the world’s most accomplished sprinters of recent years and now standing at Darley’s Dalham Hall Stud in England.

TRC has featured Not A Single Doubt before - Arrowfield Stud’s son of Redoute’s Choice was one of the three stallions who made the biggest climbs in the world rankings in 2016. Well, he hasn’t stopped climbing. This week he breaks into the world top 20, a four-point gain lifting him from 26 to joint #19, with Saturday’s Rosehill G2 scorer Single Bullet chief among his contributors on this occasion.

The sire of Extreme Choice and Miracles Of Life has 253 runs from 80 horses counting in the current three-year TRC rankings window. I Am Invincible, who has fewer crops running for him, has 113 from 47 horses, while Tavistock has 91 from 22.

Street Cry is a little higher up the sires’ rankings. He also gains four points this week - and he didn’t need his most famous offspring, Winx, to do it. The late son of Machiavellian is up two places to #12 after two big wins last Saturday - a G3 with the Godolphin filly Circular at Flemington and the G1 Coolmore Classic at Rosehill via Heavens Above. 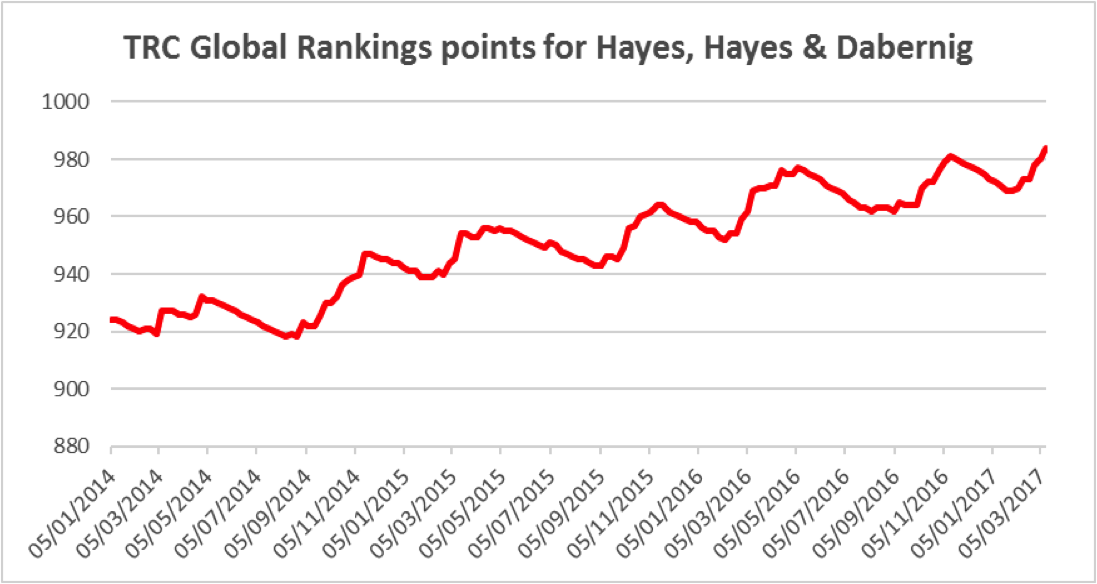 The most significant move in the trainers’ standings also came from Australia, with the partnership of David Hayes, son Ben and nephew Tom Dabernig gaining four points to climb five places to #13 after wins for the Pierro filly Tulip in a 2-year-old G3 at Rosehill and Redkirk Warrior in the G1 Lexus Newmarket Handicap at Flemington.

As the graph shows, this is merely continuing a steady run of fine form over the last three years for David Hayes, son of the legendary Colin Hayes and already a Hall of Famer in his own right.

Most prolific performer of the week was Tulip’s rider, Kerrin McEvoy, who also won a G2 on the same card at Rosehill on Saturday, having landed a G3 at Kembla Grange on Friday. It all added up to a seven-point week-on-week gain, which lifts him six places to world #15.

Most dramatic rise up this time came from Stronach Stables, up from 313 to 137 in the owners’ standings after a gain of seven points thanks to Shaman Ghost’s victory in the Santa Anita Handicap on Saturday.