In our new weekly feature, James Willoughby picks out the jockey, trainer, owner and sire who, in his opinion, made the most significant progress in the TRC Global Rankings week that ended on Sunday.

World #10 Joel Rosario confirmed his status among elite riders with a Graded stakes treble at Saratoga on Saturday. The 33-year-old won the G1 Woodward on Yoshida, the G1 Spinaway on Sippican Harbor and the G3 Saranac on Raging Bull. He picks up 4pts and has 1028 - just seven short of his career best.

As the chart below illustrates, Rosario’s position in the rankings has been remarkably consistent. 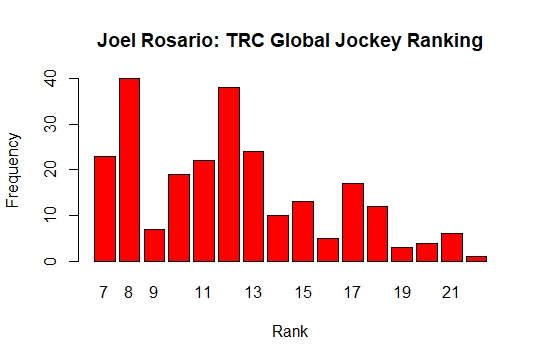 The vertical axis (Frequency) shows the number of weeks Rosario has spent at different ranking positions. The horizontal axis (Rank) shows the different ranks he has held - for instance, he has spent 40 weeks at #8. Note that he has never been lower than #22.

Magic Bloodstock Et Al are the owners of the brilliant Winx. But they would not be world #3 based on the Australian superstar alone. G2 Chelmsford Stakes winner Unforgotten - winner of the G1 Australian Oaks at Randwick in April - strengthened her course record under Hugh Bowman. Magic pick up 3pts - and are now 6/47 (13% strike rate) with horses not called Winx.

This week there were training doubles for Aidan O’Brien, Chad Brown, Darren Weir and Chris Waller. But it’s the duo who rank third in Australia to Weir and Waller who get the nod. World #21 Peter and Paul Snowden authored a Randwick double on Saturday, taking out the G2 Furious Stakes with Pure Elation and the G3 Concorde Stakes with the popular Redzel.

Fastnet Rock is ranked #3 among sires with modal country Australia. He is now #15 in the world after a sparking international treble via wins in the G2 Chelmsford and G2 Tramway at Randwick, plus the G3 Fairy Bridge at Tipperary. Heads-up, Fastnet Rock is a combined 283/303 versus the runners of Snitzel and I Am Invincible - the two ahead of him in Australia - in rankings history.