It was on a sun-soaked, picture-perfect September day in 1994 when a ribbon-cutting ceremony heralded the opening of the E.P. Taylor Turf Course. Some 20 years later, Woodbine’s green grass of home continues to grow its reputation as one of horse racing’s most respected and revered surfaces.

Perhaps it was only fitting that future Canadian Horse Racing Hall of Fame inductee Alywow, bred and owned by David S. Willmot’s Kinghaven Farms, was the one to make history at Canada’s Showplace of Racing.

For it was Willmot, then chairman and CEO of Woodbine Entertainment Group (WEG), whose vision of a world-renowned turf course had finally come to fruition.

Soon after the media scrum ended, Alywow, a bay daughter of Alysheba trained by Hall of Fame legend Roger Attfield, loaded into the gate for the first-ever race on the E.P. Taylor Turf Course, the $100,000 Canadian Breeders’ Cup Handicap, set for 1 1/16 miles over “firm” ground.

Alywow rallied from tenth and last at the half-mile mark to win by two lengths as the 4-to-5 choice, patiently handled by Dave Penna, who seemed to know he had 1,440 feet (just longer than a quarter of a mile) from the final turn to the finish line to work with when he launched his winning bid.

The grass course with the longest stretch in North America was open for business. 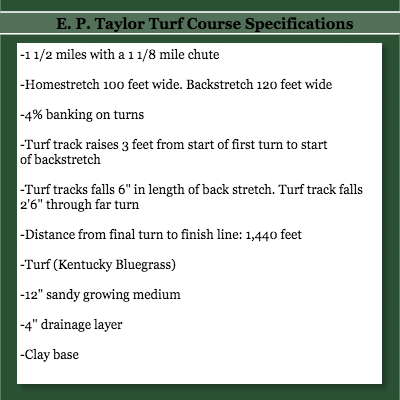 Since Alywow’s milestone moment, there have been more than 3,000 grass races, from claiming to allowance, overnight stakes to G1 classics such as the $1 million Pattison Canadian International (this year set for Oct. 19) and the Woodbine Mile, this year won by Trade Storm. It’s also home to the Breeders’ Stakes, third and final jewel in the Canadian Triple Crown series.

Some of the most talented turf titans in the sport, 2003 Triple Crown victor Wando, three-time International champion Joshua Tree, and two-time Woodbine Mile winner Wise Dan, have all enjoyed glory days over the Toronto oval green.

The E.P. Taylor Stakes, run annually at Woodbine since 1956, is a 1 ¼-mile G1, $500,000 feature for fillies and mares that is contested on Canadian International day. Last year, Tannery won the race for owner Richard Santulli.

“In my opinion, the course is special to many from Europe because of its size being one mile and a half,” said Irwin Driedger, a former champion rider who now handles the reins as director of Thoroughbred racing surfaces with WEG. “It is right up their alley as most Europeans love to wait until the last eighth of a mile to make their move. The course has a very long stretch just for those kinds of horses. Also, I think the conditions we tend to have most of the time for the bigger races, the course has some ‘give’ to it, which most Europeans love and are accustomed to back home.”

“The turf course plays a big part in people wanting to bring their horses to Woodbine,” said Julie Bell, WEG’s stakes manager. “Obviously, the Europeans appreciate the long stretch, but the wide, sweeping turns appeal to the American connections that race their horses here. I really believe it’s an even course for everyone. That’s one of its greatest attributes.”

Celebrated status and rave reviews throughout the worldwide racing community are never taken for granted.

“When it comes to a race like the Canadian International, we’re competing with the [Prix de] l’Arc de Triomphe, and plenty of other major events,” Bell said. “We’re all trying to get the same horses. It’s a ‘Game on, everybody’ approach. You factor in the weather, which can be unpredictable in the fall, and you have to work overtime to put on an equally-matched race for everyone.”

The same effort is also poured into maintaining the integrity of the course.

“On special race days, there are always 2 to 3 crews of 6 to 8 staff stomping the course after each race,” said Sean Gault, senior manager of Thoroughbred racing surfaces at WEG. “Trying to provide the best racing surface on days where the course is yielding or softer has led us to running the earlier carded stake race in lane 2 on the portable rail, then removing the rail between races and running the E.P. Taylor and the International on the inner rail.

“Removing from six furlongs to a mile of rail, goosenecks and pins, moving the marker poles and stomping the front stretch in 30 to 40 minutes with 2 tractors, 4 wagons, 4 gators, and 30 staff, and then come back after the next turf race and stomp the entire 1 1/2 miles is challenging,” Gault continued. “The satisfaction of seeing the races completed successfully and safely is the reward.”

Every renewal of the International presents unique scenarios for Gault and his crew.

“I think the turf has an attractive aesthetic quality to it,” Gault offered. “At 1 1/2 miles, it is a very visible frame around the other tracks and during turf races brings the horse immediately beside the patrons on the grandstand apron. The caliber of the horses in races like the International draws fans to the races, but it's hard to describe the excitement when fans crowd the apron rail and can practically touch the starting gate when the horses are loaded immediately in front of them. With the explosiveness of the start and the competitiveness of the race down the stretch, I think the fans feel much more a part of the race.” 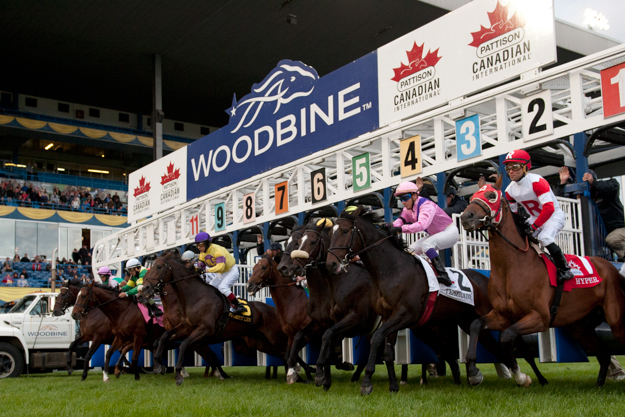 When some of the finest grass horses make their way to the gate for the 77th edition of the Canadian International, Steve Koch, vice president of Thoroughbred racing at WEG, will make his way to the grandstand winner’s circle, feet away from the start of the 1 ½-mile race.

And, as is always the case, he’ll be reminded of not only the worldwide significance of Woodbine’s stayers classic, but also what brings horses and horsemen to the racetrack every fall.

“The experience we provide for our horsemen shipping in to these events is second to none,” Koch said. “Charting the course for runners with Grade 1 ambitions is a high-stakes affair. Owners and trainers choice to target our races is not a decision made lightly. We know this and we want them to have every reason to head our way. Our team's standard operating procedure around these events is to think of everything for the horsemen so they need only worry about how the horse will run.

“And then to top it all off, our on-track hospitality is famous,” he continued. “The food is five stars and the service throughout the weekend is non-stop. Unanimously, horsemen that have been our guest once will return for more.”

At Woodbine, it’s par for the course.