Tom Durkin has been the voice of the three New York Racing Association (NYRA) tracks since 1990 and will retire from calling the races at Aqueduct, Belmont, and Saratoga on Aug. 31, 2014. A Chicago native, Durkin, 63, began calling races at Wisconsin county fairs in 1971 and has gone on to call at more than 50 tracks in six countries including calls of the Irish Derby, the Prix de l'Arc de Triomphe, and the Austrian Derby. Durkin called the Breeders’ Cup races from the event’s inception in 1984 through 2005, and the Triple Crown from 2001 through 2010. Teresa Genaro recently spoke with the announcer about his professional influences and future plans.

A picture might be worth a thousand words, but if those words are coming from Tom Durkin, they command a far higher price.

But when they come from the mouth of Tom Durkin, during an extemporaneous race call for which one can prepare only so much, the result is admiration, not confusion.

The love of language came before the love of racing, going back to high school and Durkin’s days in the Latin classroom of Father Joseph Wren.

“I was never a good student in anything I didn’t like or if I had a teacher I didn’t like,” he said one recent morning in his announcer’s booth, marking up his program as he does every day, with colors and shapes that echo the riders’ silks and act as mnemonic devices for his afternoon calls.

“I loved my Latin teacher, and I loved Latin,” he continued. “I’d recommend any parents to send their kids to learn Latin because the structure of it leads to having better skills in English and writing. It’s the basis, of course, for all the Romance languages. It’s really easy to pick up French and Spanish if you know Latin.”

Then, perhaps spurred by his program preparation, he added, “This just came to me recently, but one of the reasons I can remember stuff is because of Latin.

“Amo, amas, amat,” he went on, conjugating the Latin verb “to love.” “You just have to do it. Repetition is the mother of learning, and I just realized this year, those skills of how to memorize probably had their genesis in Latin.”

He didn’t say whether Father Wren was responsible for his love for Italy, too, but it doesn’t take much to imagine that an affinity for the classical was born in that classroom, an affinity that took him to the stage to play classical roles at St. Norbert College in Wisconsin, and later to the Italian countryside.

“I’ve always had an interest in art history and language,” said the man outside whose Saratoga home sits a distinctive sculpture, a man who has, at various points in his life, spoken French and Spanish and German, and who dives straight into 17th century France when asked to name his favorite role.

“He was such a scoundrel,” Durkin said with an admiring laugh before sliding seamlessly into a character he hasn’t played in decades.“‘Put away my hair shirt and flagellator, and pray, Laurent,  for heaven’s perpetual grace. I’m off to the prison now to share my last few coins with the poor wretches there…’”

“The entire first act of that two-act playis nothing but people talking about Tartuffe, and half the people think he’s Billy Graham and the other half think he’s Satan,” he explained.

Lest there be any doubt, lest his interlocutor be less familiar with Tartuffe than he, Durkin added, “He’s truly Satan.”

Like Tartuffe in that first act, Durkin, too, is often invisible, his words and his voice emanating, rather like Tartuffe’s, to and through listeners in thrall to his proclamations. Unlike Tartuffe, Durkin’s motives are not ignoble; where Tartuffe uses his gift of communication to deceive for his own benefit, Durkin uses his to inform, to entertain, and to educate, often for the benefit of others. 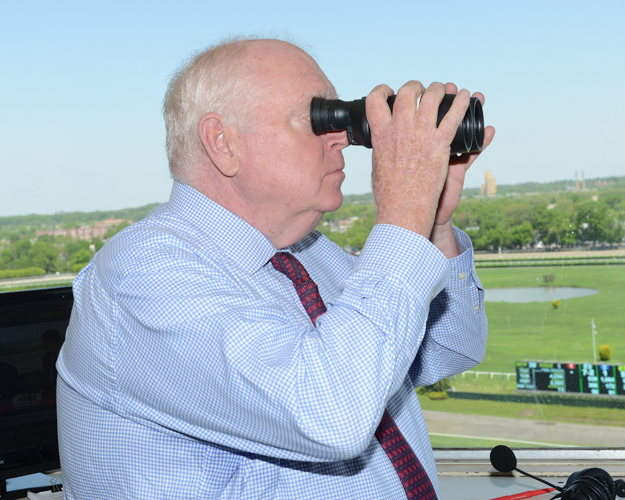 A long-time board member of Backstretch Employees Service Team (B.E.S.T.), Durkin welcomes to his announcer’s booth every day at Saratoga up to six lucky observers who pay $100 for the chance to see him call the third race. All the money goes to B.E.S.T., and Durkin estimates that in the six years of the program, more than $200,000 has been contributed to support the backstretch workers of Belmont, Aqueduct, and Saratoga.

“We need to address the social problems for folks that work at the track,” he said simply.  “I realized that I have a very privileged position here and that there’s a certain amount of duty involved with that.”

He doesn’t know what he’ll do after Aug. 31, after he calls his last race, but the first words that come out of his mouth when he talks about the possibilities are “relevant and meaningful.” He’s had plenty of downtime in his winters off, which he has spent in Tuscany and Naples – the latter not in southern Italy, but in southwest Florida. Given his penchant for things Italian, it is perhaps no surprise that Durkin ended up in Naples rather than Miami, Ft. Myers, or Palm Beach.

The announcer has no regrets about not calling a Triple Crown and was surprised, he said, by how many people told him this year that they wanted California Chrome to win so that his voice would be on a Triple Crown call.

“It really didn’t make any difference,” he said. “I have my voice on lots of great horses and races.”

Then he goes back to his drama studies, back to a phrase from his notes that resonates at the track as much as it resonates on stage.

“Predictability is the element of drama,” he said. “It’s pretty cool that no one’s been able to win the Triple Crown for so long, and I think a lot of the air’s going to go out of the Triple Crown balloon when someone finally does win it.”

Durkin has opinions on racing that he might express when he’s no longer in the public eye, things he’d like to see changed, and he hopes that he can be a positive voice, both literally and figuratively, though he admits that he’ll pick his spots carefully.

“With the regulatory aspect of horse racing right now, you’re tilting at windmills,” he said, allusions to the classical creeping back into his conversation. “I don’t see myself as Don Quixote. I’m more Sancho Panza.”

The deluded Don Quixote spent his life grandly fighting for a cause that no longer existed, stubbornly resisting the entreaties of his pragmatic sidekick Sancho Panza. It might not be as Don Quixote, but Durkin doesn’t rule out a return to the stage, perhaps in community theater, perhaps in Saratoga, one of his adopted homes, where he plans to spend a good deal of his time in retirement.

“I’d like to do some comedies,” he said. “I’ve always wanted to be Sir John Falstaff; that would be the role of a lifetime for me. I’ve got long passages of that put to memory.”

Sir John Falstaff is Shakespeare’s sybaritic bon vivant, and it might be tempting to draw parallels here between the actor and the role, but lionize the character at your peril: Not above venality if it served his purposes, Falstaff is complicated, even unpredictable, with proclivities that cost him. Most prominent in the Henry IV Part I and Part II, he is mentioned but not present in Henry V, when word reaches the title character that his former mentor, cast aside when he became king, has died.

Both Tartuffe and Falstaff exit the stage in disgrace, the former’s perfidy revealed, the latter’s friendship unwelcome. The man who would inhabit both of them will suffer no such fate. His Saratoga farewell is a celebratory one, and he is more in demand—as a speaker, a master of ceremonies, an interviewee, a host—than ever, his every word quite literally attended to.

His exit recalls neither Quixote nor Tartuffe nor Falstaff, but there is perhaps an ironic hint of Charlie Chaplin at the end of “Modern Times,” like Durkin an American classic. Chaplin avoided for as long as possible entering the talkie era; “Modern Times” is both his final silent film and the Little Tramp’s final appearance.

We see him last as he walks jauntily into the sunset at the end of the movie. We don’t know where he’s going, and while the film suggests hope and promise, it also conveys the sadness of farewell. With Chaplin, it is the silence that we know we will miss. With Durkin, it’s the words.  We wish them both the best but, selfishly, wish they’d hang around a little longer, not for their sake – we know they’ll be fine – but for ours.