January is the time of year when different racing jurisdictions traditionally honour the champions of the previous 12 months.

In North America, this is in the form of the Eclipse Awards, a glitzy voting-based ceremony on Jan. 17. Elsewhere, the emphasis tends to be on numerically based ratings: the World’s Best Racehorse Rankings, as well as the definitive ratings for Timeform’s leading horses around the world, are revealed a few days later.

Form-based, or class-based, ratings involve inferential comparisons between horses that may or may not have met on the racecourse. They take into account precedents set in the races themselves, as well as the history of the individual horses involved. Overall race times are considered, but they are just one element: Timeform additionally uses sectional, or fractional, analysis these days.

Ratings are a tried-and-tested way of evaluating a horse’s performances, but they also have wider applications that are increasingly prompting interest. One of these is the ability to evaluate races themselves: to assess how strong or how weak they really are, as well as the degree to which race strength varies or tends to be repeated.

There are a number of ways of establishing race strength, one of which is to calculate a weighted average of the performance ratings of the horses that finish close up. By this method, for instance, the average race strengths of all G1s in North America since 2009 was 113.2 on Timeform form-based ratings; G2s were 108.1; and G3s were 104.1.

While the Graded system is meant to provide an easy and robust reference point across different circumstances, there is in truth a great deal of variation around those averages. Some Graded races are rendered weaker by age and sex restrictions, others are much stronger than the norm.

As an illustration of the latter, the Breeders’ Cup Classic has been the strongest race on Timeform ratings, using the above method, in North America in each of the last five years with the exception of 2011 (Drosselmeyer’s year), when it was surpassed by the Breeders’ Cup Mile (won that year by Court Vision).

The 2014 Breeders’ Cup Classic, won by Bayern, merited a race-strength figure of 125.8, but it was not quite the strongest race in the world in the past year on Timeform form-based ratings, as this table shows. 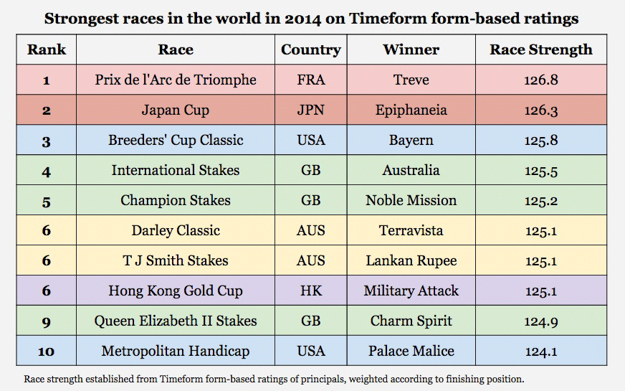 Race-strength calculations can also identify contests that are failing to punch their weight.

For example, the same process identifies the G1 Triple Bend Stakes as equivalent to only an average G2, not just judged on 2014 – when the race moved from Hollywood Park to Santa Anita and was won by Declassify – but over the six-year period during which Timeform has been rating each and every race on the North American continent. The Triple Bend’s average race-strength figure in that time is just 108.1: must do better.

The list of G3s masquerading as G2s is quite a bit longer and includes the Beaumont Stakes at Keeneland (99.6), the Swale Stakes at Gulfstream Park (103.7), and the Jerome Stakes at Aqueduct (104.0), all of them admittedly restricted to 3-year-olds.

The Swale was downgraded to G3 after 2011 but upgraded again after 2013 (the year after future Breeders’ Cup Sprint winner Trinniberg took the race) but does not merit the reprieve judged overall.

At the other end of the scale, Belmont’s Kelso Handicap (115.2) and Saratoga’s Jim Dandy Stakes (116.2) have pretty strong claims to be upped from G2 to G1 judged on recent editions.

With the adoption of dates and features from the shuttered Hollywood Park, Los Alamitos Race Course gained a leg up in 2014. The Los Alamitos Derby (formerly the Swaps Stakes at Hollywood) won by Shared Belief was worthy of its G2 status, but other Graded races at the track underperformed.

In the basement of G3s are the Ballerina Stakes (not to be confused with the deserving G1 of the same name at Saratoga) and the British Columbia Derby, both at Hastings, and the Canadian Derby at Northlands, none of which has a race strength greater than 94. Some Canadian races justify their billing, others do not.

While knee-jerk responses to occasional variations are not to be encouraged, it is important that races are not allowed to rest on their laurels indefinitely. The American Graded Stakes process ensures the occasional upgrading and downgrading of races in the U.S. via annual review (Canadian contests are assessed independently), but anomalies still exist.

The foundations further down – and not just the apex of the pyramid, as represented by races like the Prix de l’Arc de Triomphe and the Breeders’ Cup Classic – need to be solid if Group and Graded systems are to have the credibility being sought for them.

One race is notable by its absence in that earlier list of the top races around the world in 2014, of course, and that is the most valuable of them all, the Dubai World Cup, which is only 10th for the 2010 to 2014 period with a race-strength of 123.2.

The possibility of the first four from the latest Breeders’ Cup Classic turning up at Meydan on March 28 suggests a return to the good times for the race could be just around the corner.

Simon Rowlands is head of international research and development at Timeform.