More than in any other category in the TRC Global Rankings, the owners’ standings have been dominated by the biggest names in the sport lately, as James Willoughby reports.

Wins by Headman in the G2 Prix Eugene Adam at Saint-Cloud, Siskin in the G2 Railway Stakes at the Curragh and Sun Maiden in the G3 Hoppings Fillies’ Stakes at Newcastle make a total of nine wins on the year, as the table of leading owners by aggregate for 2019 confirms: 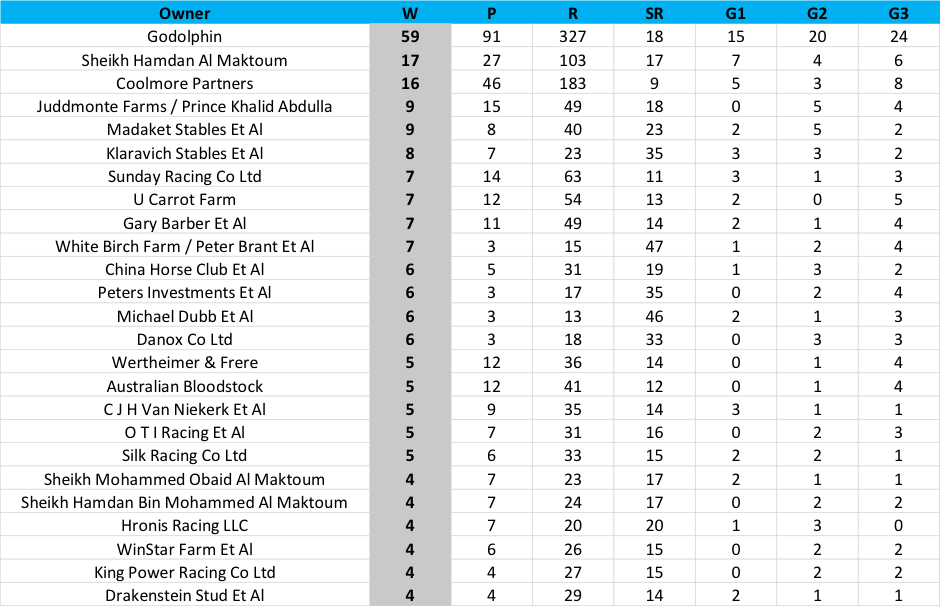 The Big Four owners according to TRC Global Rankings now reside in the top four places in terms of total wins so far this year. In Juddmonte’s case, the three picked up this week all look a good bet to add further wins later in the campaign, and, with dual Arc winner Enable returning in the G1 Eclipse Stakes at Sandown this weekend, the top-notch racing and breeding organisation – formerly #1 in the world – could claim their first G1 win this year.

Headman, a son of Kingman trained by Roger Charlton, revealed himself to be an exciting talent in France. Having pulled hard early in the mile-and-a-quarter test, he quickened sharply in the straight, engaging his awesome power and raking stride.

Siskin is another potential champion. The colt by First Defence travelled strongly and quickened well en route to an impressive win in Ireland. He will now bid for the G1 Keeneland Phoenix Stakes back at The Curragh and looks sure to start favourite.

Sun Maiden is a beautifully bred daughter of Frankel. She isn’t the same prospect as the other two, and the Newcastle contest was her fourth start in Group company and her first win. She will need to progress further, but she is already a highly valuable broodmare prospect.

Juddmonte-owned horses have fared quite well in head-to-head clashes with those of the other major players in Group races since January 1, 2018.

These results are aggregated in the following ‘league table’ of Big Four clashes, which shows that only Godolphin-owned horses own a superior head-to-head winning percentage:

These paired comparisons are the building blocks of our rankings. Each match-up receives a weighting according to its predictive power. Coolmore Partners are ranked higher than Juddmonte and Sheikh Hamdan because their tendency for multiple runners in their ownership in the same race suppresses the performance of each individual (and hence lowers head-to-head success-rate) while improving the probability of a win for the collective. We compensate Coolmore Partners for this in all our calculations.