By the start of the World War II, a substantial British racing community had grown up in France’s main racing town of Chantilly, just north of Paris. During the previous 100 years, that community had played a key role helping shape the sport in the country and had come to regard the picturesque town as home. That situation was not to last much longer, as John Gilmore recounts in the first of two reports on a sorry episode in racing history.

Germany's humiliating World War II defeat of France in just six weeks, culminating in capitulation on June 21, 1940, was a major turning point in the fortunes of the British horse racing community in Chantilly.

A large number had already returned to Britain after both France and Britain declared war against Germany on Sept. 3, 1939. Those remaining eventually either made a last-minute dash for England or found themselves rounded up and interned in prison camps for four years.

The Britons’ love affair with Chantilly began more than 100 years earlier. When Queen Victoria’s cousin, Lord Seymour, was out hunting in the forests of Chantilly in 1833 with friends, he noticed the possibility of a racetrack on the lush turf in front of the chateau. Henri Duc d’Aumale, only 11 at the time but owner of the chateau and surrounding lands, was advised by his elder brother, Ferdinand-Philippe Duc d’Orleans, in all affairs. As avid horse lovers, the family were only too grateful to pursue Lord Seymour’s idea.

The pioneer trainers, racecourse ground staff, jockeys, lads, and Thoroughbred horses were initially brought over from England - where horseracing was fully established - to develop the racecourse and install training facilities in the surrounding area. The number of racecourses and meetings quickly expanded in France and continued doing so right up until the 1930s, when the country was hit by high unemployment. The French had previously considered racing as an unsuitable source of work because of its association with gambling.

The first official race at Chantilly was staged in 1834. Two year later, the inaugural Prix du Jockey Club for colts was won by Frank, and in 1843, the initial Prix de Diane for fillies took place, helping to establish Chantilly as a great new venue for racing.

The pioneer trainers Carter, Cunnington, Jennings, and their descendents were to have a big impact on French racing up until the World War II. Lord Seymour won the first three Prix du Jockey Club races with horses trained by Thomas Carter. The Carter family name left an indelible mark on Chantilly, winning a remarkable 26 Prix du Jockey Club races between 1836 and 1937. 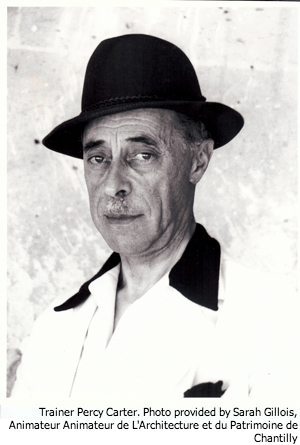 From the outbreak of war in 1939, all French racecourses were closed until further notice and Chantilly's vast training centre became a French air force base. When possible, training operations were transferred to the nearby Lamorlaye stables and gallops.

A number of training establishments were requisitioned by the French Army, as it prepared to go to war. In a way, that helped a large majority of the British racing community decide to pack their bags and leave while the going was good, with many of those young enough wanting to sign up to  fight for their country.

The extent of the Britons’ influence in the Chantilly region is illustrated by the annual trainers’ records showing a total of 43 trainers listed at the beginning of 1939. That figure had fallen to just 17 by the end of the following year after the British left.

The situation was made worse because the top Jewish racehorse owner families - the Rothschilds, Sterns, Wertheimers, and Wildensteins - had to leave the country in a hurry.

After occupation, the Germans wasted no time transferring most of the top horses, including classic winners, from the leading owners to Nazi Germany, where they were raced and bred by German owners. Many were never returned, even after the war.

All the Rothschild horses were auctioned in 1941 by the Vichy regime that nominally ran France, to German buyers. French owners rallied round to take care of horses remaining from other exiled owners, including Baron de Nixon and the Wertheimers. Leading British owner-breeder Lord Derby transferred his French-based racehorses to run in the Marquis de Saint-Sauveur’s name during the war to avoid them being taken by the Germans.

By 1941, only 2,000 racehorses were still in training in France, half the 1939 total. Many were killed as a result of German bombing in 1940. Allied bombing in 1944 was also responsible for killing a number of stallions and mares at Normandy studs.

Most of the Carter and Cunnington racing families, whose ancestors arrived in the 1830s, had to leave in a hurry after the outbreak of war - apart from the few who had taken out French nationality. The only Carter trainer left in Chantilly was Percy and the only Cunnington was John Jack. Chantilly-based racing historian and journalist Michel Bouchet, now 88, remembers this period well.

"I grew up and was at school with some of the sons of the British trainers at this time, when racing was still the life's blood of the town,” Bouchet said. “To see members of great racing families like Batchelor, Carter, Cunnington, Jennings, Pratt, Watts, Watkins, and many others leave for England, never to come back, was a very sad moment in the town's history."

Stable lad William Darey, who arrived in Chantilly in June 1928 at age 21, along with 50 others from England, recounted this time vividly in 1995, the year before his death.

"It was just like being back home, everybody spoke English in the shops, virtually the first French word I learnt was ‘chemise’ when first buying a shirt at The Sporting Taylor, opposite as it was then the Hotel du Condé,” Darey said

"I soon got work as a lad with the Jennings stable, and things went well for me over the next ten years, I became a jump jockey and married a local French girl." 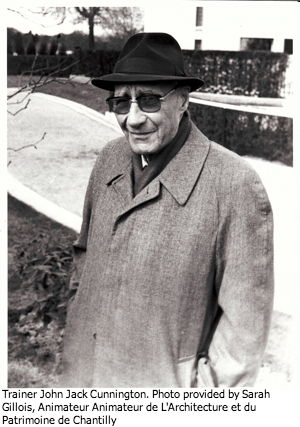 After war was declared in 1939, Darey, with wife Adeline and recently born baby Michel, decided to stay in France.

"A lot of my racing friends left for England immediately,” he said. “But the initial news bulletins in France gave the indication that the French air force and military would be able to defeat any German attack on the country, so we took a chance and stayed.”

In May 1940, things turned for the worse as the Germans advanced through Belgium, and Darey and his wife, who was now pregnant again, began thinking of leaving for England. But it was too late.

"I was woken up at about 6 o’clock on May 27 to the sound of aircraft overhead and bombs dropping nearby,” he said.

The next few hours were frightening for the residents as bombs rained down.

“After talking with other British racing people still in Chantilly and listening to the BBC World Service reporting the north route to England was now totally cut off, going south or west to escape, seemed the only solution,” Darey recalled.

“There was total panic in the town and I just wanted to get away from it all with my family,” he continued. We took some food and money a few spare clothes for the baby and started walking with others to Paris, pushing the pram.

“It was a nightmare. People were screaming from time to time as bombs continued dropping around us, and we all had to keep going off the road into ditches or hiding in the fields and forest alongside until it subsided.

“The bombers seemed to be deliberately targeting the civilians. How eventually my family made it safely to Paris, tired and hungry, without suffering any serious injury, I will never know. Unfortunately, others were not so lucky."

In Paris, they went to the British Embassy to seek help, but the only advice offered was to make their way to Marseille and catch a boat to England via Portugal.

"With no trains running at that time, walking to Marseille with a pregnant wife and baby in a pram didn't seem a very practical proposition," Darey said. “In the end, we stayed with some French friends in Paris for a while and, having no alternative after France was beaten, returned to Chantilly at the end of June, by train this time.

“By the end of July, I was arrested, along with the rest of the British community in Chantilly, interrogated at Senlis [town near Chantilly] by the German occupying forces, then sent initially to Drancy [internment camp in north-east Paris] and later Saint Denis men’s camp [nearby] for the next four years."

Ninety seven British men and women from Chantilly were rounded up and interned by the German occupying forces. Some, who had taken out French nationality before 1927 thinking they were safe, were also interned - the Germans making this French law null and void.

“Prison life was hard and very cold in the winter, and there were a lot of English-speaking Australians, Americans, and others who were caught in the wrong place at the wrong time, but in general the British were treated a lot better than some other nationalities and I saw some cruel things that I would not wish to talk about,” Darey recalled.

“The diet was not too bad, with the Red Cross providing food parcels, and there was even a German officer at the camp who owned racehorses and treated us a bit better after recognising a couple of  jockeys who had won races for him in Germany."

But Darey was extremely lucky to survive the war.

"A fellow Russian prisoner who was a doctor saved my life when I needed a very serious operation to my nose and the Germans refused to do it,” he said. “The only contact I had with the outside world was the occasional allowed visits by my wife."

Liberated in August 1944, Darey went back to Chantilly to try and pick up the pieces. It was a very different racing world.

"I was lucky,” he said. “Adeline had a job as a secretary with a notaire [lawyer in a public office] and still lived in our old flat just round the corner from St. Peter's Anglican Church, with our two children, Michel and Gerard. Trainer John Cunnington informed me that most of the British trainers had left for England four years earlier and my old boss, John Jennings, had managed to be one of them despite leaving it late.

“With fewer horses in training, and times being hard, I quickly realised stable jobs would be scarce. Unlike before the war, the French were now keen to accept work in racing stables."

Darey was fortunate in being married to a French woman with a job and a flat, which enabled him to take his time looking for work. After four years’ internment, others who were single or had no financial means or job prospects and little help from the French or British governments simply gave up and went back to England.

"I understood their anger and admit I was fortunate not to be in the same position myself," Darey said. "After six months, I managed finally to find a good job as head lad with top French trainer Charles Semblat, who knew me before the war. Things went well and I reached the highlight of my racing career when preparing Le Petit Prince to win the 1954 Prix du Jockey Club. It was a fantastic feeling."