The result of the big G1 in Britain last Saturday may have considerable significance in the narrative of the 2019 European season, argues James Willoughby.

Of the 22 Group winners trained by AIDAN O’BRIEN (+3pts, stays #4) this season, none is more propitious than G1 July Cup winner Ten Sovereigns (see video below).

While the Ballydoyle trainer has a hammerlock on Group races at a mile and a half-plus thanks to the stock of Galileo, winning Britain’s midsummer sprint championship with a horse who looked miles from peak form on his previous start at Royal Ascot may be significant.

In total, O’Brien had four winners to his total: in addition to Ten Sovereigns at Newmarket, Japan won the G1 Grand Prix de Paris at ParisLongchamp, Royal Lytham the G2 July Stakes at Newmarket and Peach Tree the G3 Stanerra Stakes at Leopardstown. As a result, he now stands third globally in Group or Graded wins in 2019: 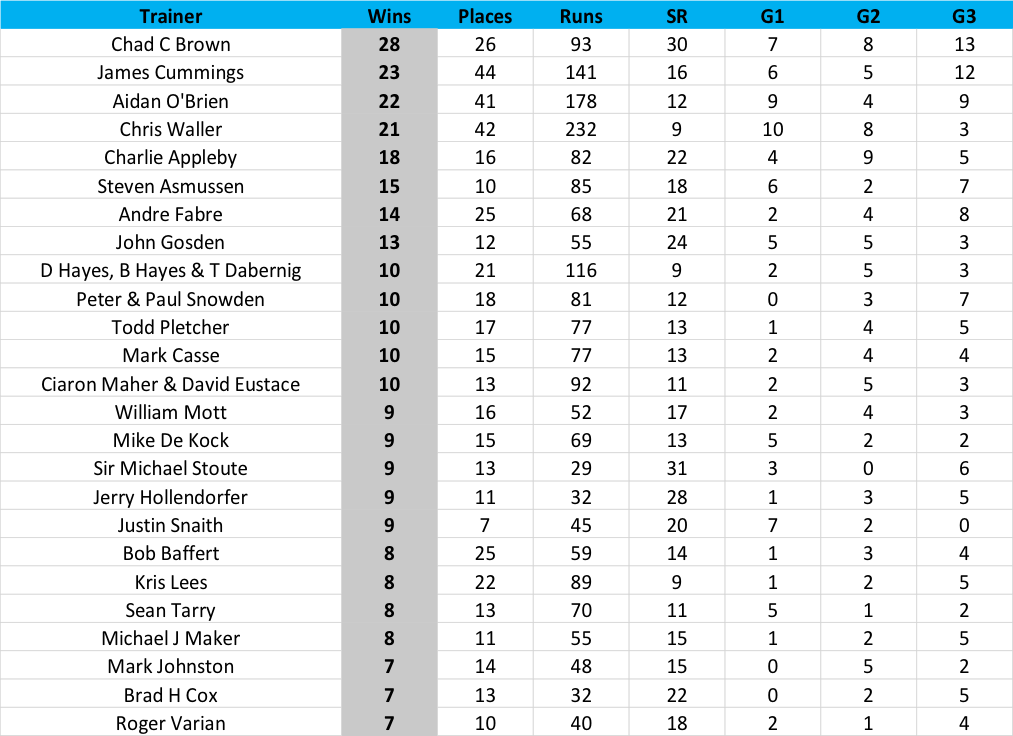 We have been tracking global Group and Graded race results since 2011. In this period, the powerful elite of the sport across the world have become more powerful still at a remarkable rate – perhaps an echo for the world in general.

Either way, O’Brien’s results in this period divide into two epochs, as shown in the table underneath. The second, current epoch is shaded.

Over the last two seasons (this one incomplete) O’Brien’s strike rate has dipped alarmingly to 12 percent. This, however, is some function of his average runners per race increasing from 2015 to annual averages of 1.54, 1.67, 1.94, 2.00 and 2.17. While this increases the total probability of a winner trained by the stable, each extra runner tends to have a diminishing probability of winning itself (though several have actually obliged, most notably apparent pacemaker Sovereign in the G1 Irish Derby.)

As we have stated before, TRC Global Rankings makes an allowance for the frequent multi-runner scenario O’Brien relies on so successfully in the big races. Our efficiency-based metrics given the first runner in a race a weight of 1, and successive runners weights of approximately 0.8, 0.66, 0.50, 0.33 and 0.25 etc, so if a trainer fields five runners and wins the race, one winner is added to his total but only 1 + 0.8 + 0.66 + 0.50 + 0.33 = 3.3 runs. (These coefficients are estimated during weekly automated back tests to maximise the out-of-sample forecasting accuracy of the system.)

It is important to recognise that TRC Global Rankings are not measuring the skill of a trainer, nor their impact upon the sport measured over their career. When we want to do the latter, at least for the years since 2011, we remove weighting towards recent results. We call these rankings, for all races 2011- our Legacy Rankings (shown underneath.) 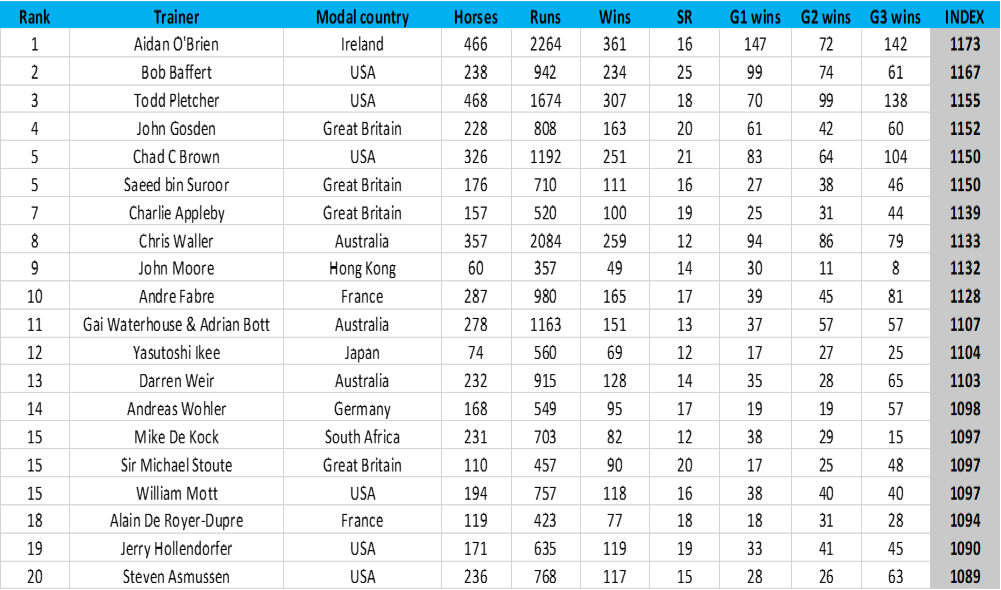