For more than a decade, racing in New South Wales has been fighting an inflated rate of wagering tax compared to the rest of Australia’s racing jurisdictions. Gretchen Kijak wonders if the recent state election, and a glittering autumn carnival in Sydney, will finally close the book on the issue.

Anyone who has ever spent time in Australia will know that the concept of fair play is ingrained into the culture, and in the last few years in New South Wales, fair play is exactly what the racing industry has been chasing. Racing in the premier state (coined from it being the first site of white settlement) is seeking an equal footing with Victoria and Queensland when it comes to taxation equality. All up, New South Wales racing believes it is missing out on an estimated AUD$70 million a year.

Let’s take a look at how things currently are.

Compared with the rest of Australia’s racing states and territories, New South Wales pays the highest state tax. In basic comparative terms, with a variation in totalisator and fixed odds betting, the New South Wales government takes $3.22 from every $100 bet with the wagering entity TAB across all Thoroughbred, harness, and Greyhound racing. The Victorian government takes $1.28, while in Queensland, the country’s third-largest racing state, the taxman takes a mere 82 cents.

“Tax parity [for New South Wales] would mean getting more money back to invest in the infrastructure of racing,” said David Attenborough, chief executive of Tabcorp Holdings Ltd, which operates a number of wagering and gaming outlets in Australia, including the TAB, and a media service (Sky Racing). “It certainly seems right and fair that there should be parity.”

In what has been a 10-year crusade for the state, with the issue first raised in a 2004 report, Racing NSW Chief Executive Peter V’landys has again outlined the benefits of tax equality to the New South Wales industry in the latest strategic plan. He said a large percentage of the $70 million in question is earmarked for increased prize money.

“Unless we address the disparity between what owners pay out and what they get back, the industry will continue to contract,” V’landys said. “As we said from day one, we didn’t want a handout, and we didn’t want a grant. We just want what is rightfully ours.”

The issue has never been more relevant with Racing NSW looking to secure the future of the very endowed, very beneficial The Championships.

It is suggested that bringing New South Wales’s taxation rate into line with Victoria and Queensland would add up to $100 million across all three Australian racing codes – Thoroughbreds, harness, and Greyhounds. In addition to increased prize money, the additional funding would go to marketing, training, and apprenticeships.

In late March, Sydney’s premier racing carnivals at Rosehill and Randwick coincided with a New South Wales state election, and tax parity was a hot election topic. The then current premier Mike Baird fended off an attractive package from his opponent Luke Foley. Foley promised that, if elected, his government would bring New South Wales wagering tax into alignment with Victoria by Jan. 1, 2016. He said it would create 2,000 new racing jobs.

Foley lost the election to Baird, who was reinstated on Mar. 28, and under new pressure to match Foley’s promise. Radio personality Alan Jones, colloquially known by the leftwing as a shock jock, but who is less Howard Stern and more Bill O’Reilly, pressed the Baird government on the issue.

“Tax parity is the number one thing on our plate right now,” said Troy Grant, who retained his position as state racing minister. “We’re moving into the budget cycle, and we’ve made the commitment that we would consider it [tax parity] part of this year’s budget cycle.” 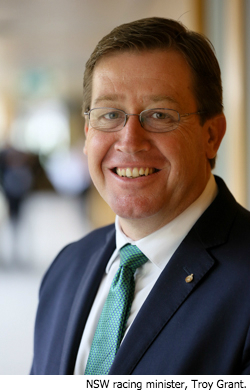 The timing is excellent, because business is booming in New South Wales racing.

Yearling-sales results across the board have been up 20 percent in 2015. The recently done and dusted Inglis Easter sale cracked the $100 million mark for only the third time in the company’s 100-year history at Newmarket. Golden Slipper winner Vancouver was sold for a reported $40 million, making him the most expensive Slipper winner ever sold to stud. And, during The Championships, Longines announced a three-year sponsorship of the Golden Slipper festival, along with an innovative, technological partnership with the Australian Turf Club (ATC).

The figures are still emerging from last week’s The Championships at Randwick, but it is already clear that wagering on the lead-up heats for the inaugural Country and Provincial Championships (whose finals were held on day one and day two, respectively) was up 40 percent on each of the local race days. This alone made the concept a rip-roaring success for the state.

Also, the ATC claimed big figures for Rosehill’s three Saturdays of racing through March. Betting was up 25 percent on the BMW Stakes this year, and 28 percent on the Vinery Stud Stakes. Overall, state TAB turnover that day was up seven percent, and up 1.3 percent on Golden Slipper Day. The ATC and Sky Racing also made a point of revealing a double-digit growth in their social media followers.

“I couldn’t be more proud of Racing NSW and the ATC,” said Grant, speaking to Sky Racing about The Championships. “Without a doubt, it’s done a couple of things. It has started to elevate us as a state, in being able to host a significant event. It’s drawing the international interest, and obviously the participants here, with 24 G1 winners [on day two]. That’s extraordinary. But what it’s also doing is uniting the industry – country, provincial, and metropolitan racing. Everyone’s got a buzz about participating.”

For New South Wales, the economic benefit of tax parity also includes sectors outside of racing. In 2014, an independent report by Deloitte Access Economics indicated an overall boost to the state economy of $172 million should New South Wales fall into line with its neighbours.

“As a minister, I’ve done all the work to argue the case, so in the next couple of weeks we’re looking forward to announcing some good news,” Grant said. “I’ve still got some work to do with my cabinet colleagues. I’ve got to convince the treasurer and the like, but any injection we put into an industry that has a return for the economy is a smart investment. So that’s what we’ve got to do. We’ve got to balance it up with all the competing demands on government, and see where we land.”

Like so many things in politics, the government is still being coy. On the one hand, Grant says there will be good news, but on the other hand, only if he can bring all his people to the table. In the meanwhile, racing’s economic wares were there for all to see during Sydney’s autumn. The industry hopes they will be enough to champion the cause once and for all.