America has a new number one stallion. After more than three years at the top of the TRC Global Rankings, the mighty Tapit has been replaced in the newly updated standings.

The Gainesway supersire, U.S. champion by progeny earnings every year since 2014, has been overtaken in our rankings by Curlin. The two-time American Horse of the Year edges ahead by three points this week, thanks mainly to Stellar Wind’s victory in the G1 Clement L Hirsch Stakes at Del Mar last Monday.

The TRC Global Rankings seeks to compare individuals at the highest levels of competition so is based on performances in all Group and Graded contests around the world. Results in other races do not count.

The Clement L Hirsch was Stellar Wind’s second Grade 1 triumph in just over a month (she also took the Beholder Mile at Santa Anita on July 31) and comes after a solid run for her sire, who has also won two Grade 2s and a Grade 3 since the start of June. Tapit, on the other hand, has won just one Grade 1 (the Belmont with Tapwrit) and one Grade 3 in that time.

Curlin becomes the fourth stallion to top the sires’ standings in the life of the TRC rankings. War Front and Bernardini have also had a number of weeks as U.S. #1, as the table below shows.

REIGNS AS #1 SIRE IN THE UNITED STATES 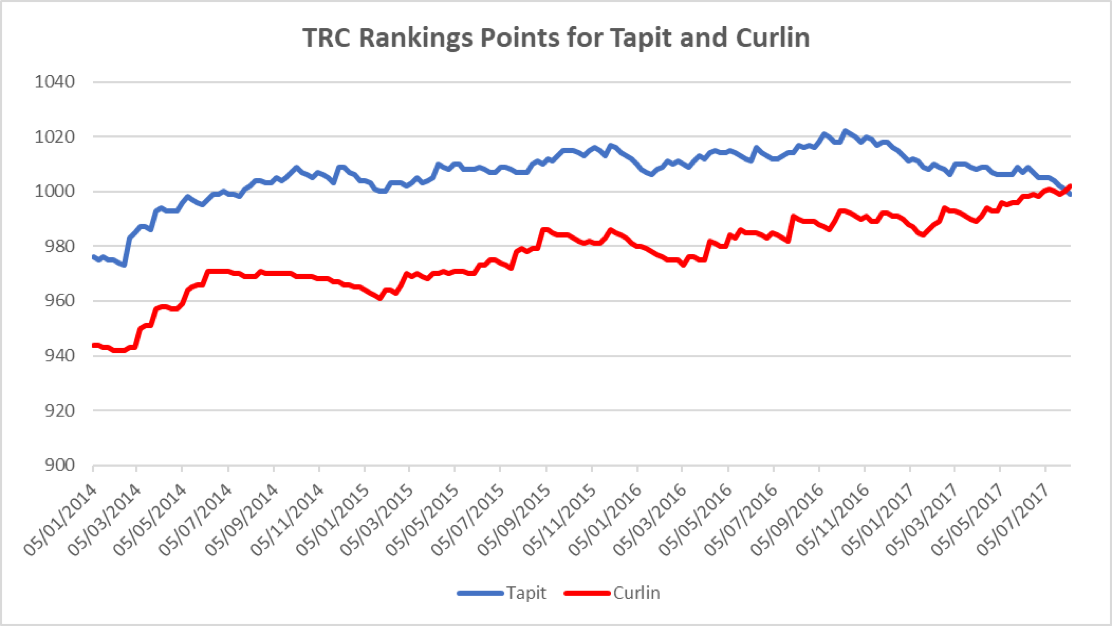 The Hill ‘N Dale stallion has been closing on Tapit for some time now, as this graph of their rankings trajectories illustrates. But Tapit remains as popular as ever, as the sales at Saratoga this week have shown.

There’s little between the pair in the 2017 U.S. earnings list, either, although they are some way behind leader Unbridled’s Song (sire of Arrogate) and the resurgent Ghostzapper.

Indeed, Curlin and Tapit don’t have much to spare now over a number of other prominent sires in the U.S. standings in the TRC stats, Ghostzapper among them. Candy Ride heads the pack at the moment, and he’s just four ranking points behind Tapit. There are no less than seven American-based stallions in the worldwide top 13.